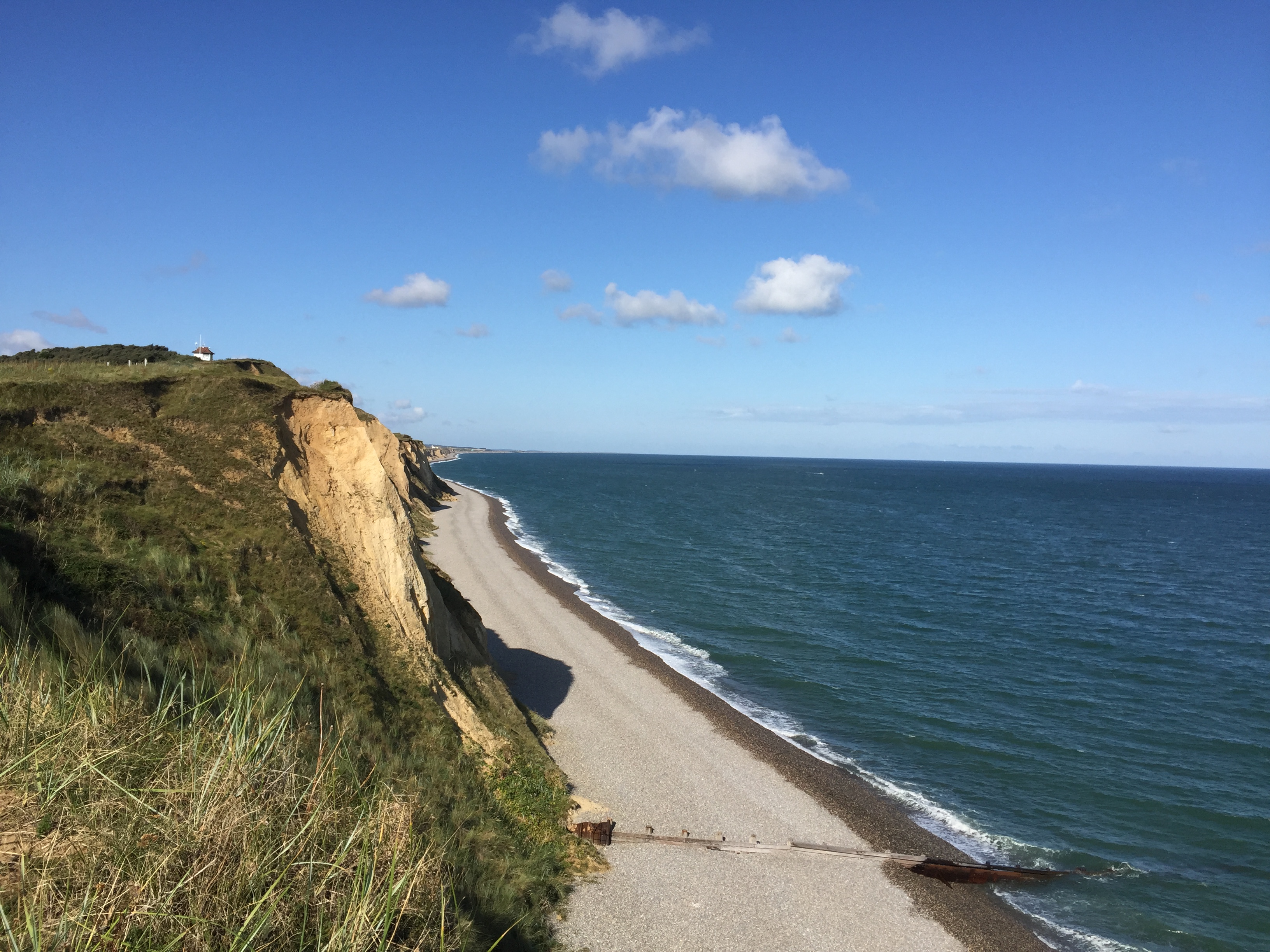 In this entry I will cover what is probably the most popular section of the Norfolk Coast Path: the route from Sheringham to Hunstanton via Wells-next-the-Sea. I walked it in two parts, the first half immediately following my walk from Ayslham to Sheringham, so let us start there.

I did not sleep particularly well in the youth hostel and my feet slightly hurt from the previous day, so overall I felt a bit groggy. Luckily there was a cooked breakfast and the day was beautiful, so I nevertheless started the walk in good spirits. I was soon richly rewarded, for west of Sheringham the coast path is on the cliffs and provides some spectacular views. 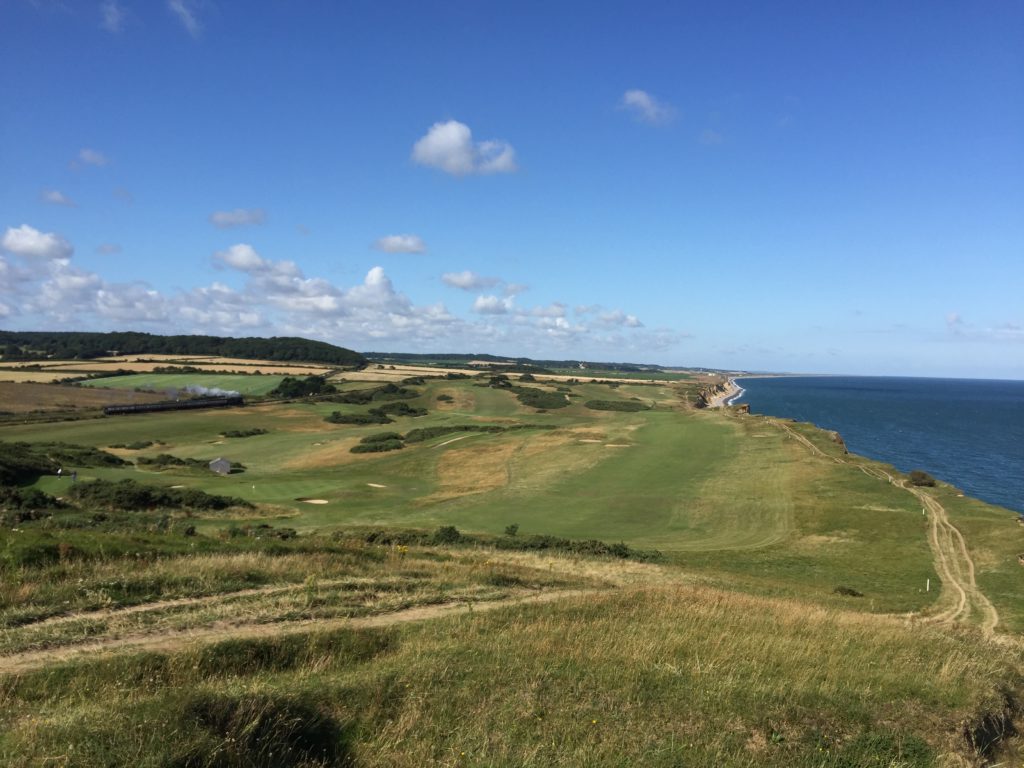 The steam train in this picture is the North Norfolk Railway heading to Holt, which I have used on a previous occasion.

After the cliffs end the paths goes along a beach, from which one can see several anti-aircraft guns up a hill. They are part of the Muckleburgh Collection, a large military museum. 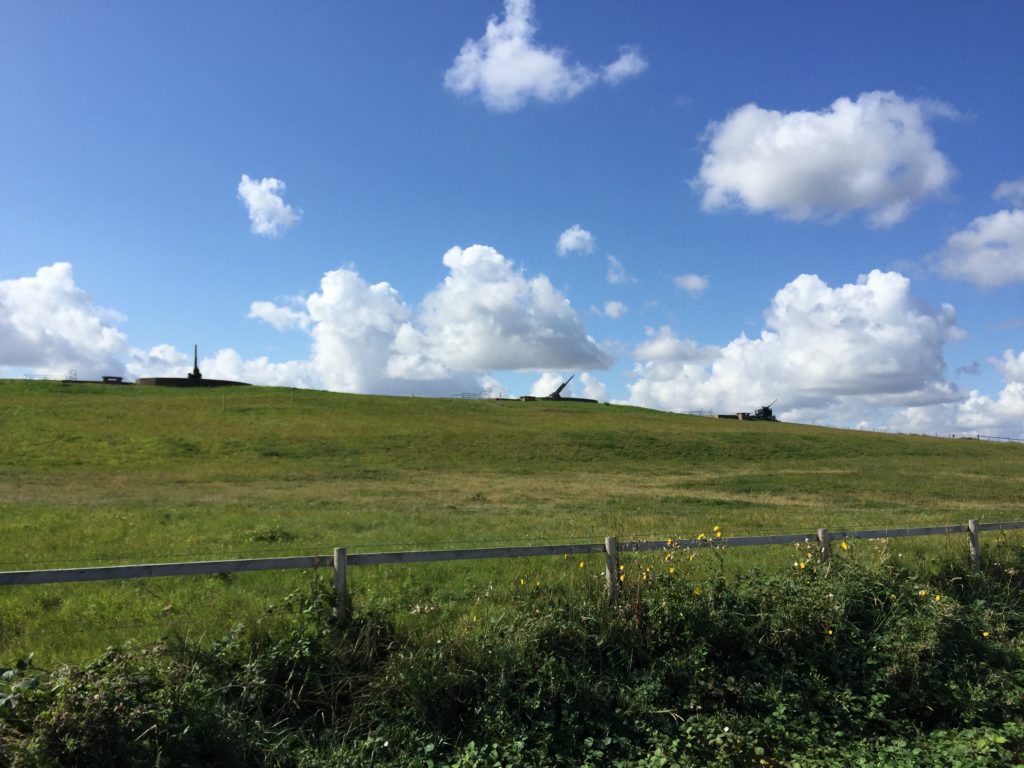 Soon afterwards the terrain started to change, and a massive shingle mountain appeared on one side. 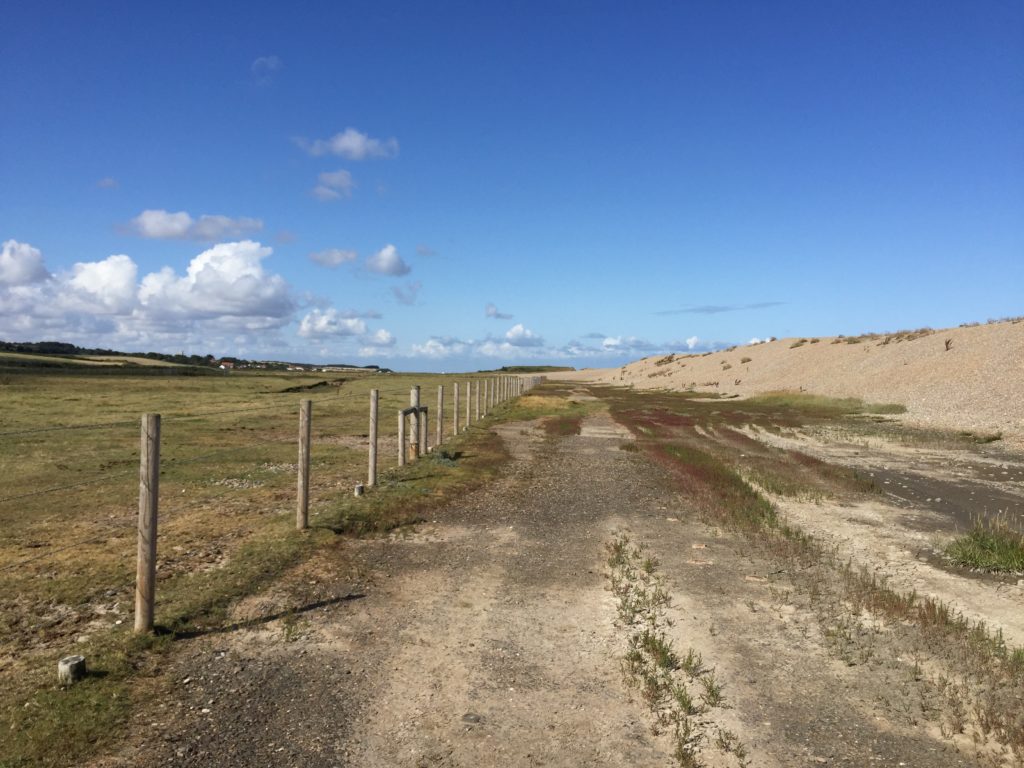 I avoided walking on the shingle as far as I could, but soon there was no alternative. 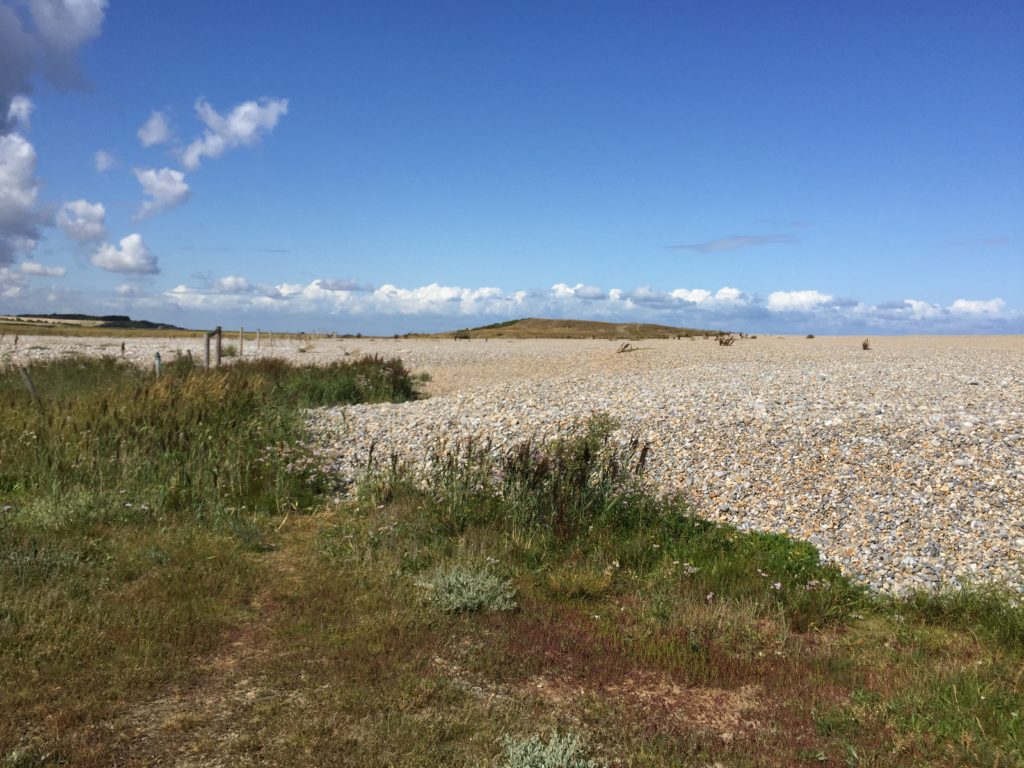 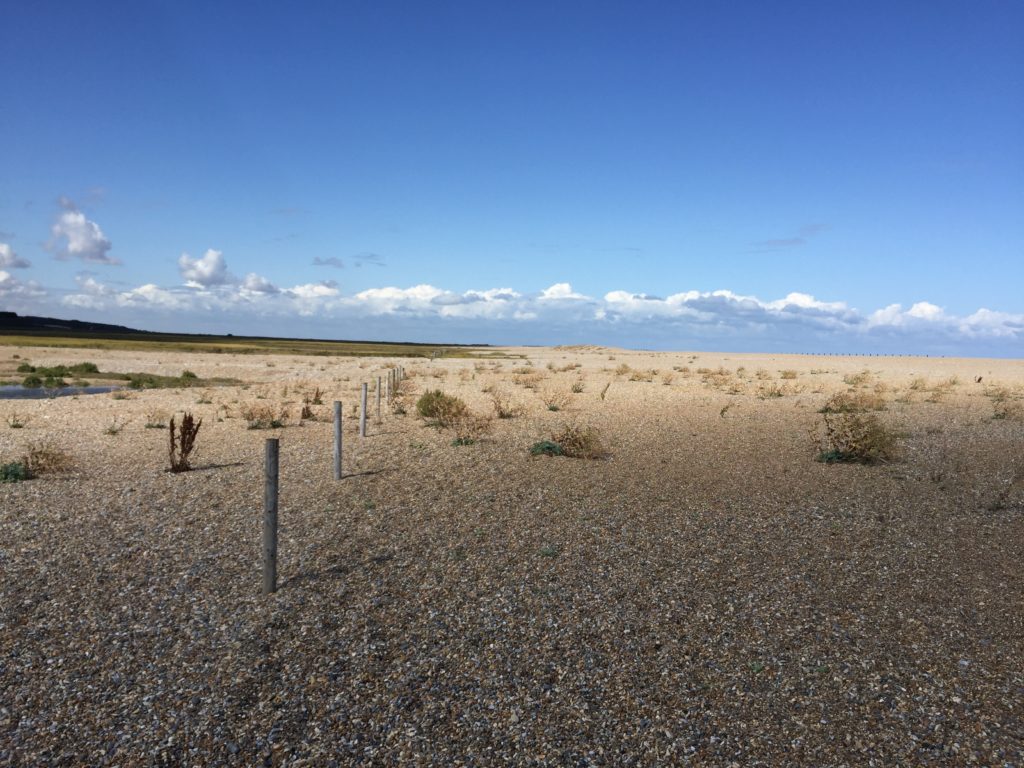 The shingle was loose, so that each step was hard work and my progress became excruciatingly slow. I assumed that this would only be temporary, but after I had walked on shingle for half an hour I began to suspect that things would continue in this manner for a couple of miles, until the next village. This turned out to be nearly correct, for I luckily managed to find an alternative and much more pleasant footpath for the last mile.

This unpleasant experience made me wonder whether I had missed the route of the official Norfolk Coast Path at some point, but it turned out that the shingle hell is indeed the intended way. Since others have also not enjoyed this part of the walk very much I later found a proposal for a shingle-free detour.

I had now made it to the village of Cley-next-the-Sea, which is pronounced “Clay” and has a nice windmill. I have been wondering about the “-next-the-Sea” suffix, which – unlike the popular “-by-the-Sea” – only seems to be found in Norfolk, but have so far been unable to find any explanation of why this is so. 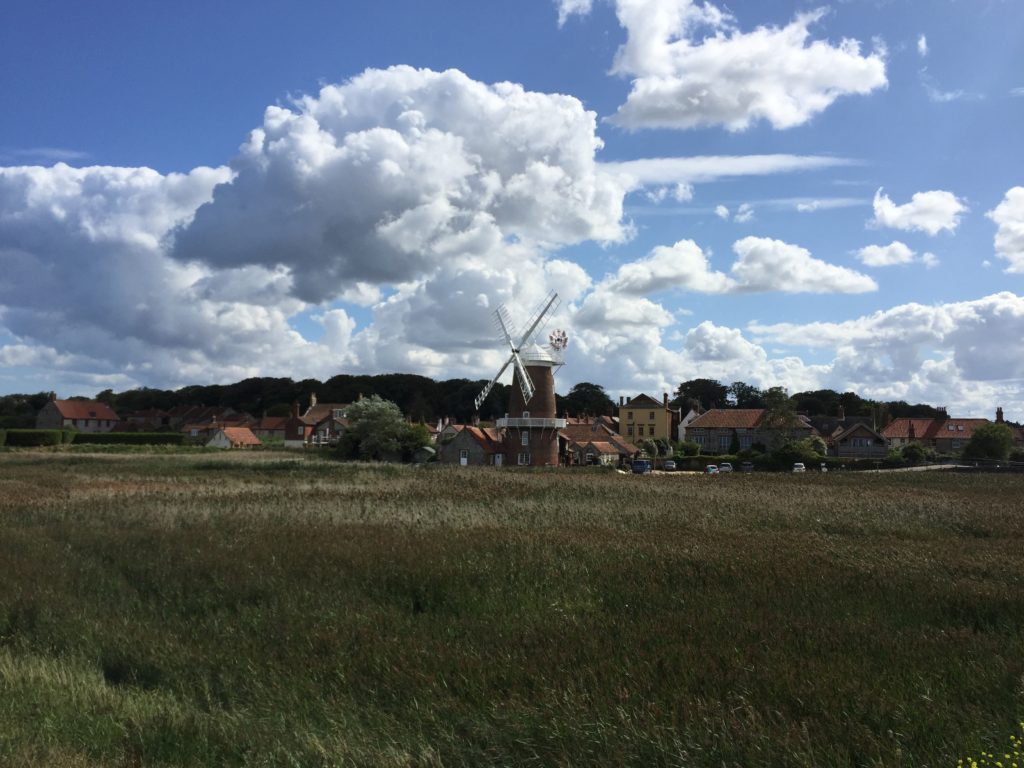 From this point on the walk became much less eventful, with the landscape for the most part looking like this: 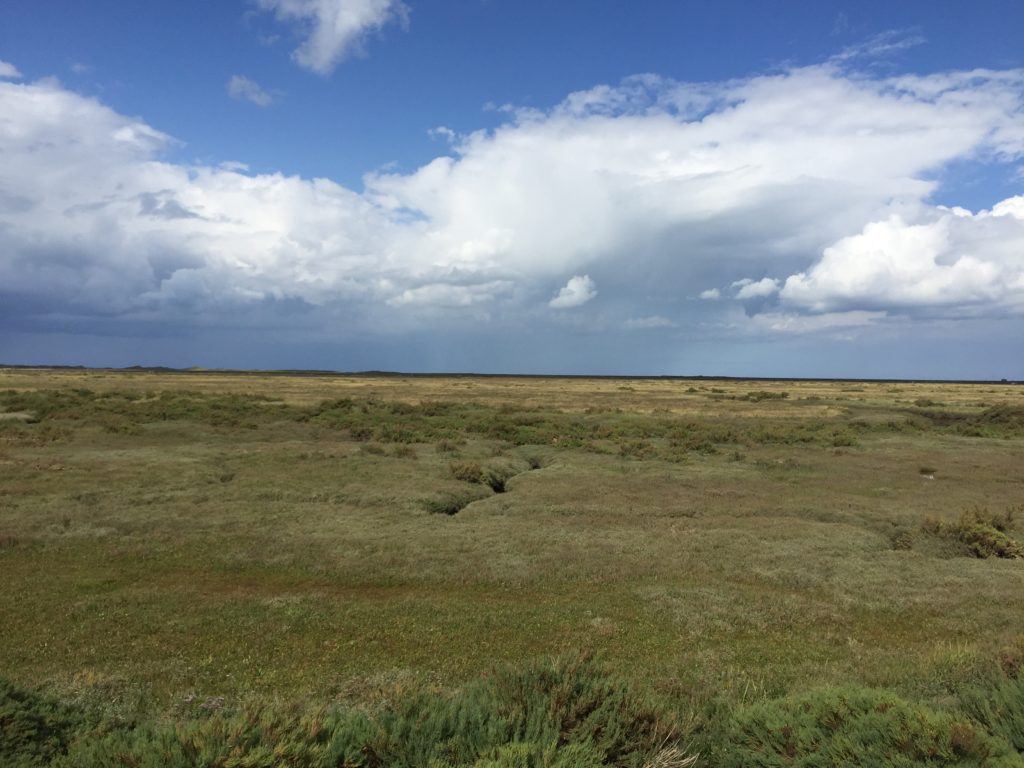 One of the villages on the way is worth mentioning: in the first half of the 20th century Stiffkey famously had a rector who, after an eventful life and career, ended up being in eaten by a lion in Skegness.

Towards the end of the walk I became quite tired, and was pleased when I saw Wells-next-the-Sea appear on the horizon. I arrived there just in time to take the Coastliner bus to King’s Lynn, although the bus driver did not seem very enthusiastic about having passengers. After stating where I wanted to go he responded by saying “You know that you’ll be on this bus for three hours?” (this was repeated to other passengers as well), and pointed out that it would have been faster to take another bus which had left a minute ago. Despite the leisurely pace I enjoyed the scenic journey.

Two weeks later I was back in Wells, in order to tackle the ~22 miles to Hunstanton. Remembering the bus driver’s advice I did not take the Coastliner to get there this time, but the slightly faster route from King’s Lynn which involves changing buses in Fakenham.

Right to the west of Wells is one of the most scenic parts of the Norfolk Coast Path: Holkham Beach, which has appeared in various films and TV shows. It is hence a popular tourist attraction, but once I had moved away from the parking lot I was pretty much on my own: 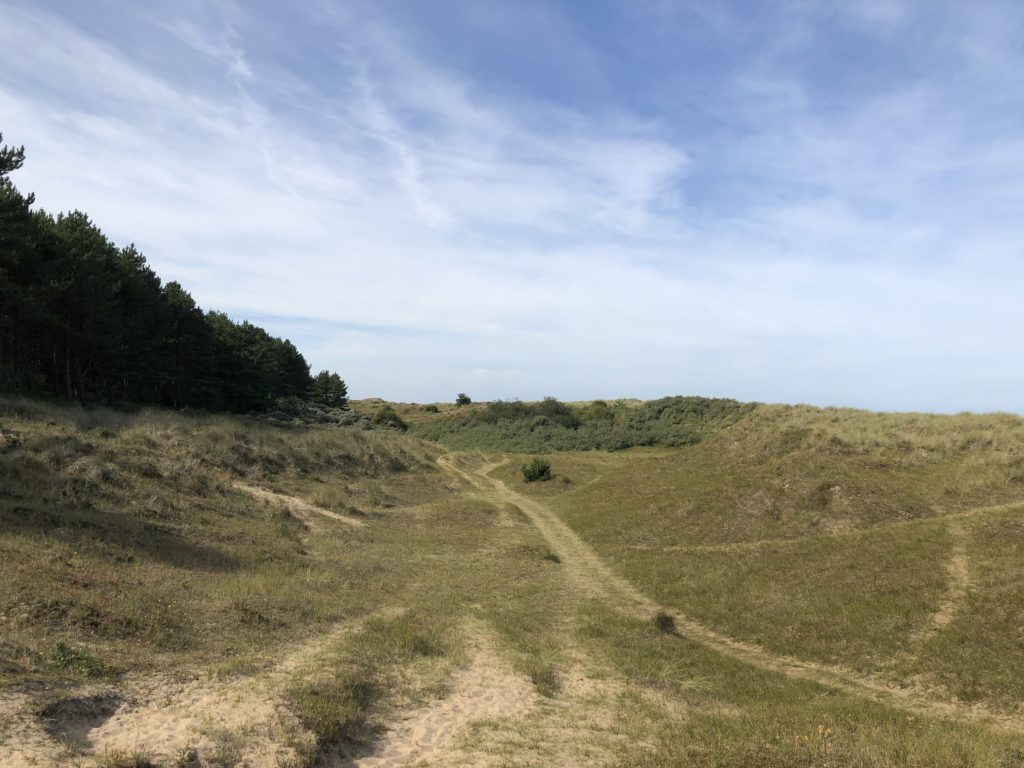 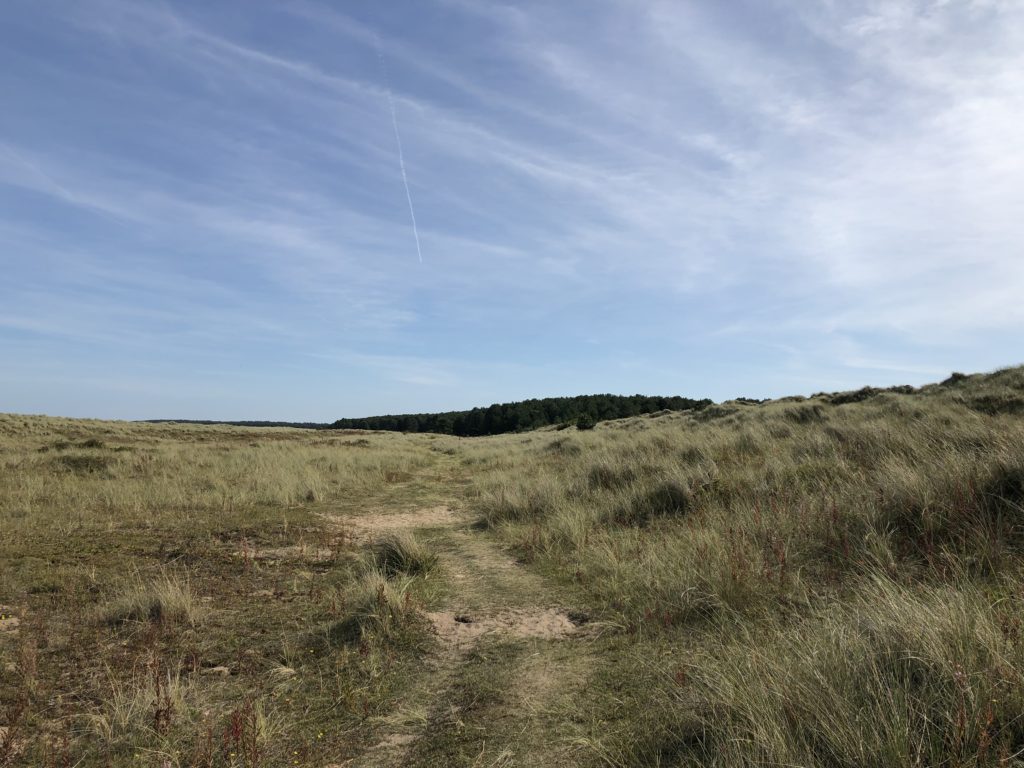 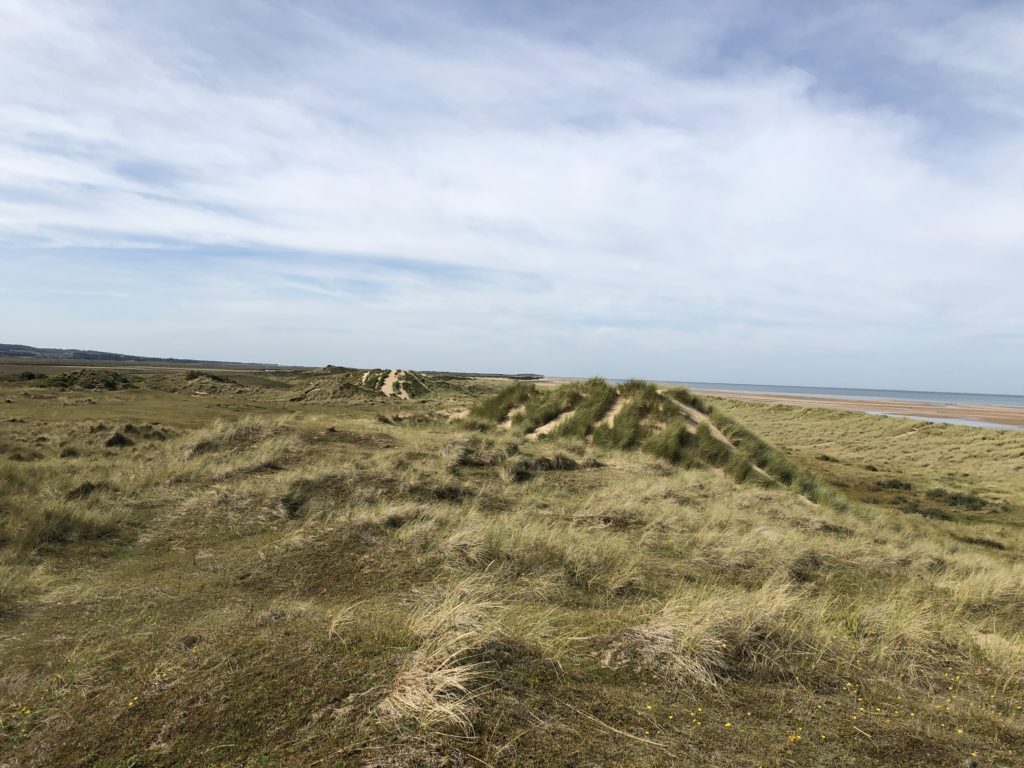 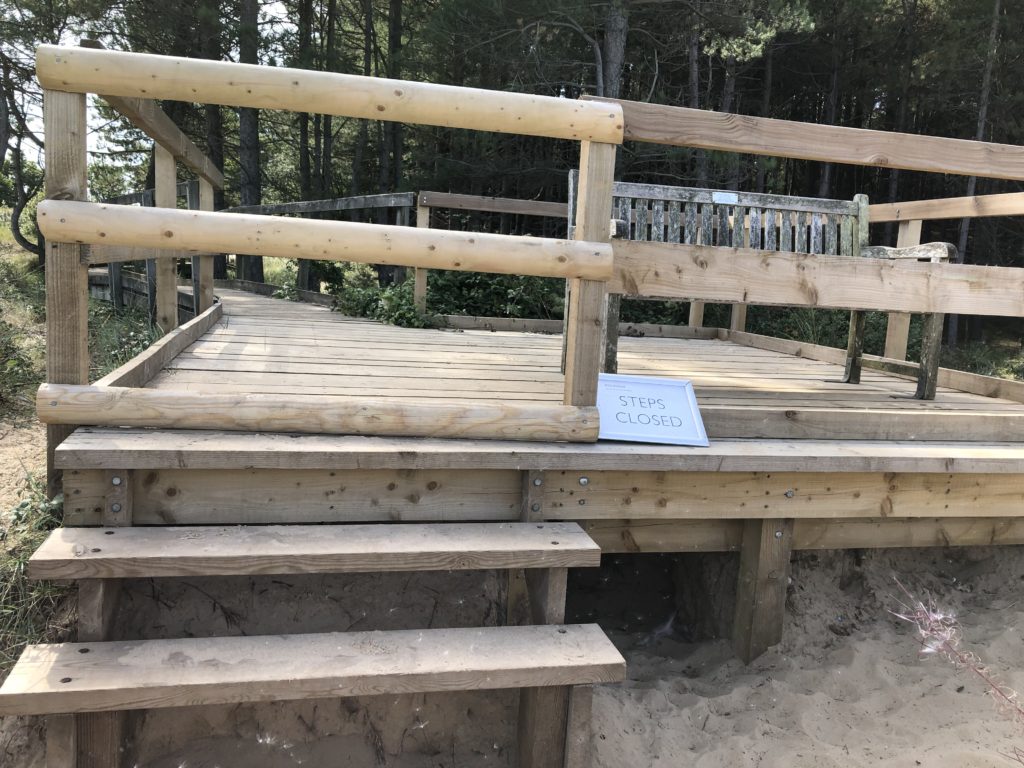 After Holkham the walk continued to be pleasant but – as the second half of the first stretch – relatively uneventful. Even though it doesn’t quite fit I will use this occasion to insert a picture of a typical Norfolk flint house: 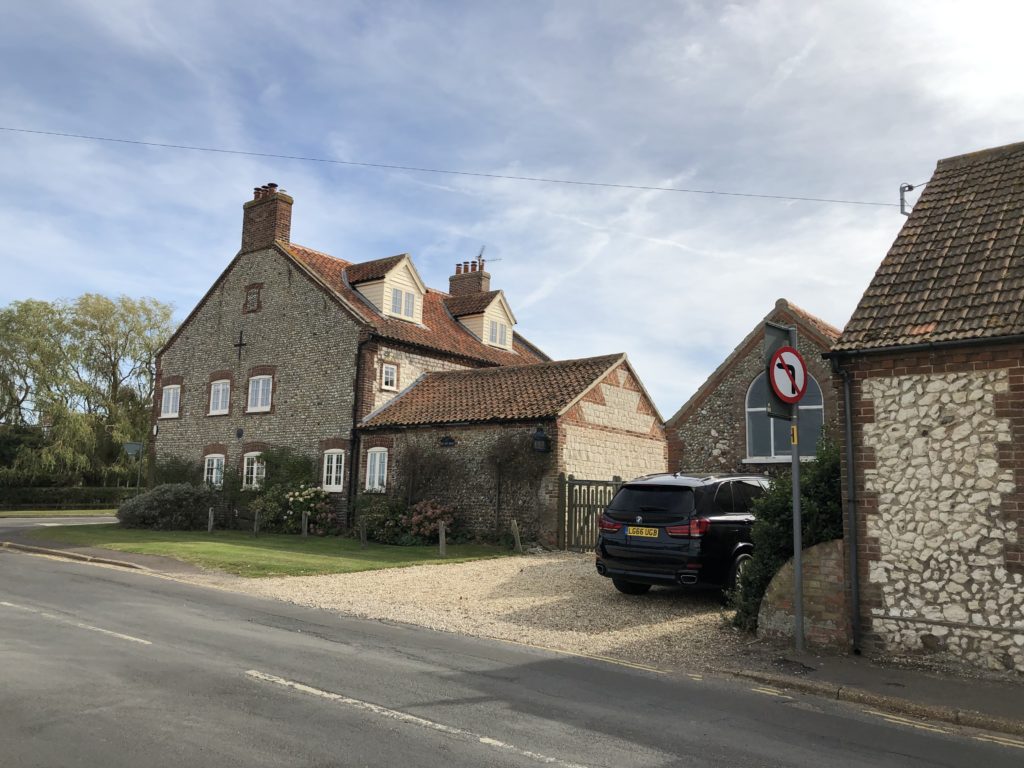 At the village of Brancaster the official Norfolk Coast Path takes an inland diversion away from the coast, which I felt unenthusiastic about. I had done some research in advance which suggested that there is the possibility to walk along the beach instead, however it was not clear whether this route was still passable due to a very recent breach of the beach. I was tempted to just give it a try, but ultimately decided against it because any delay would have meant walking in the dark or terminating the walk early. 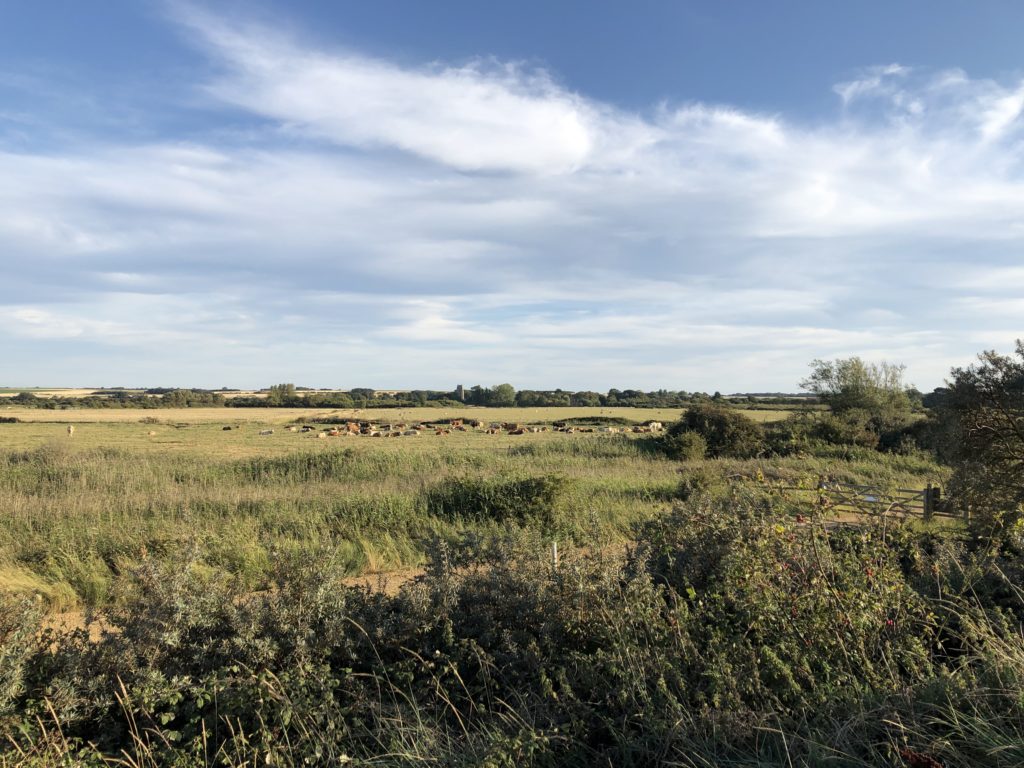 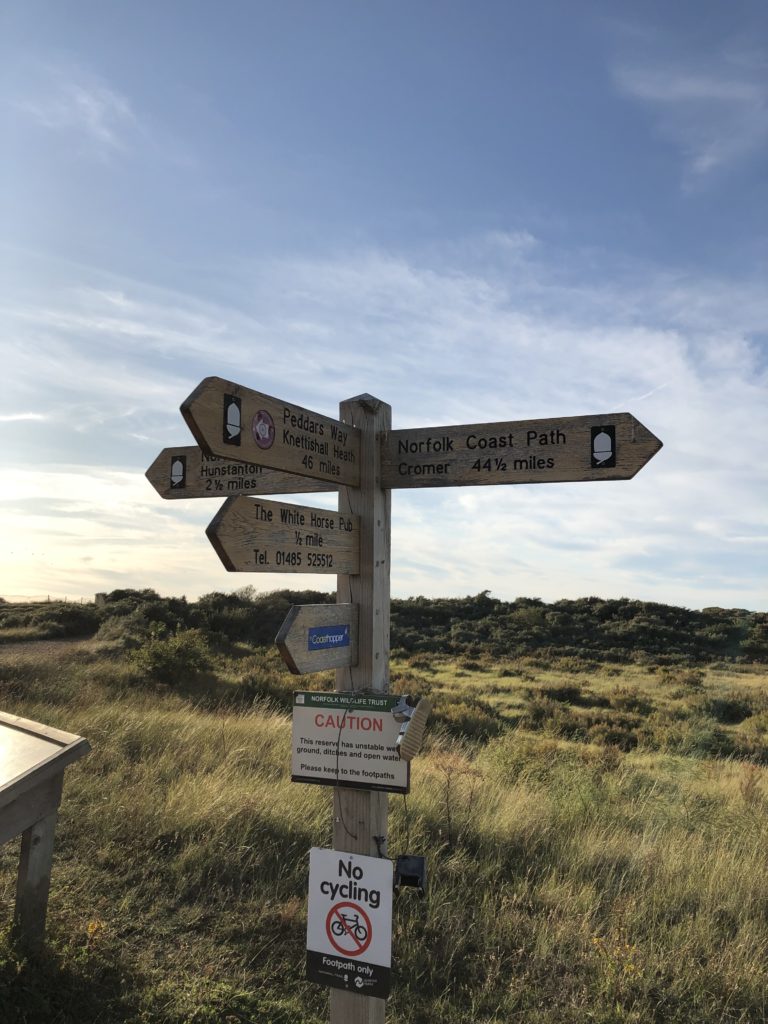 After passing this signpost I had nearly reached my destination, and I approached Hunstanton walking on the beach. In an earlier entry I suggested that Hunstanton is not very nice, a statement I now would like to officially retract: the cliffs alone (of which I had been unaware on the earlier occasion) make it well worth a visit. 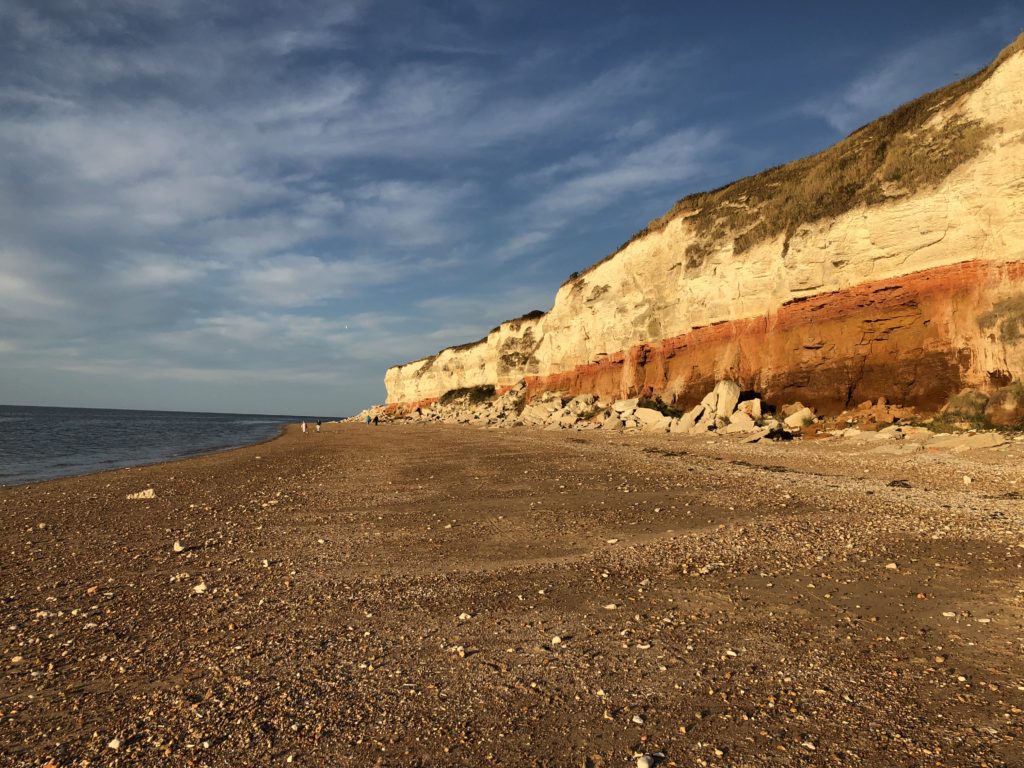 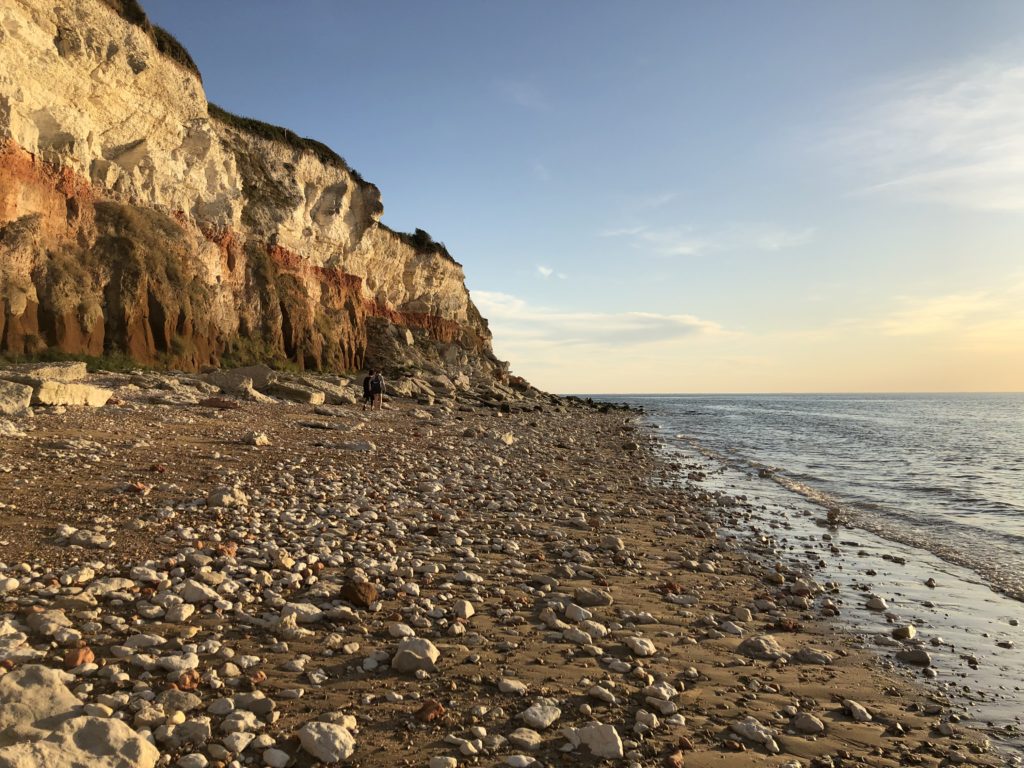 Another excellent feature of Hunstanton is that it is one of the very few places in the east of England from where there is water to the west, which is ideal for watching the sunset. 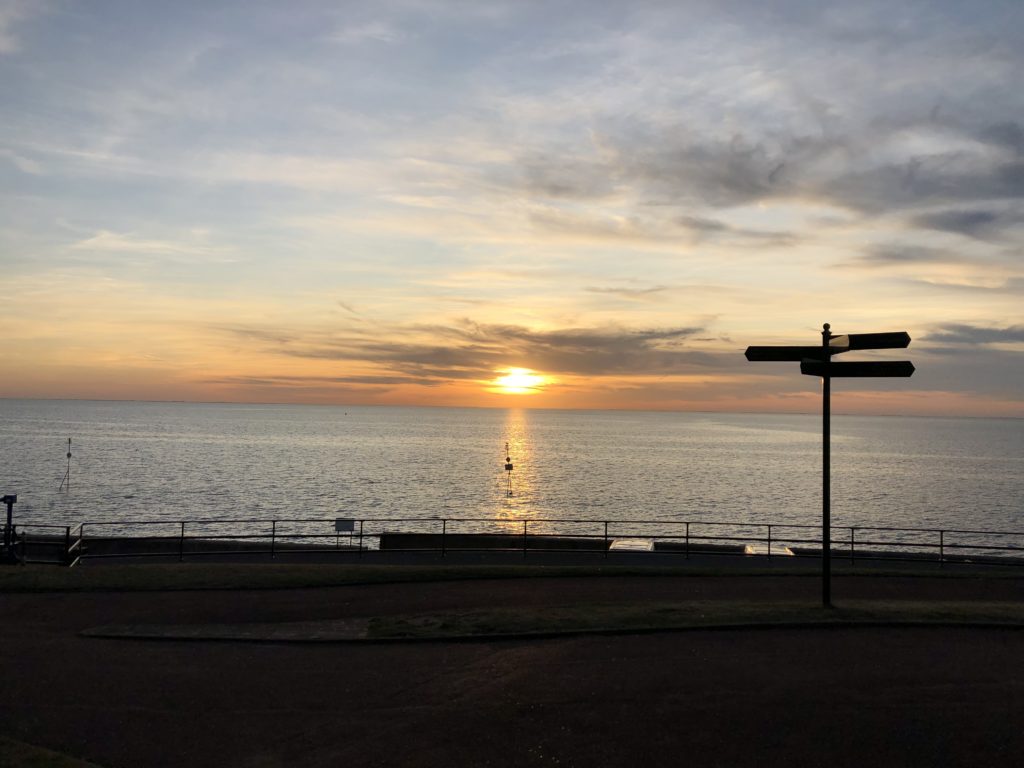 Unfortunately I failed to properly use this opportunity since I was hungry after the walk and tried to get some food, but long queues everywhere stopped me both from eating and from seeing the sun set. I regretted this on the bus back to King’s Lynn, but otherwise the walk had been a very enjoyable experience.