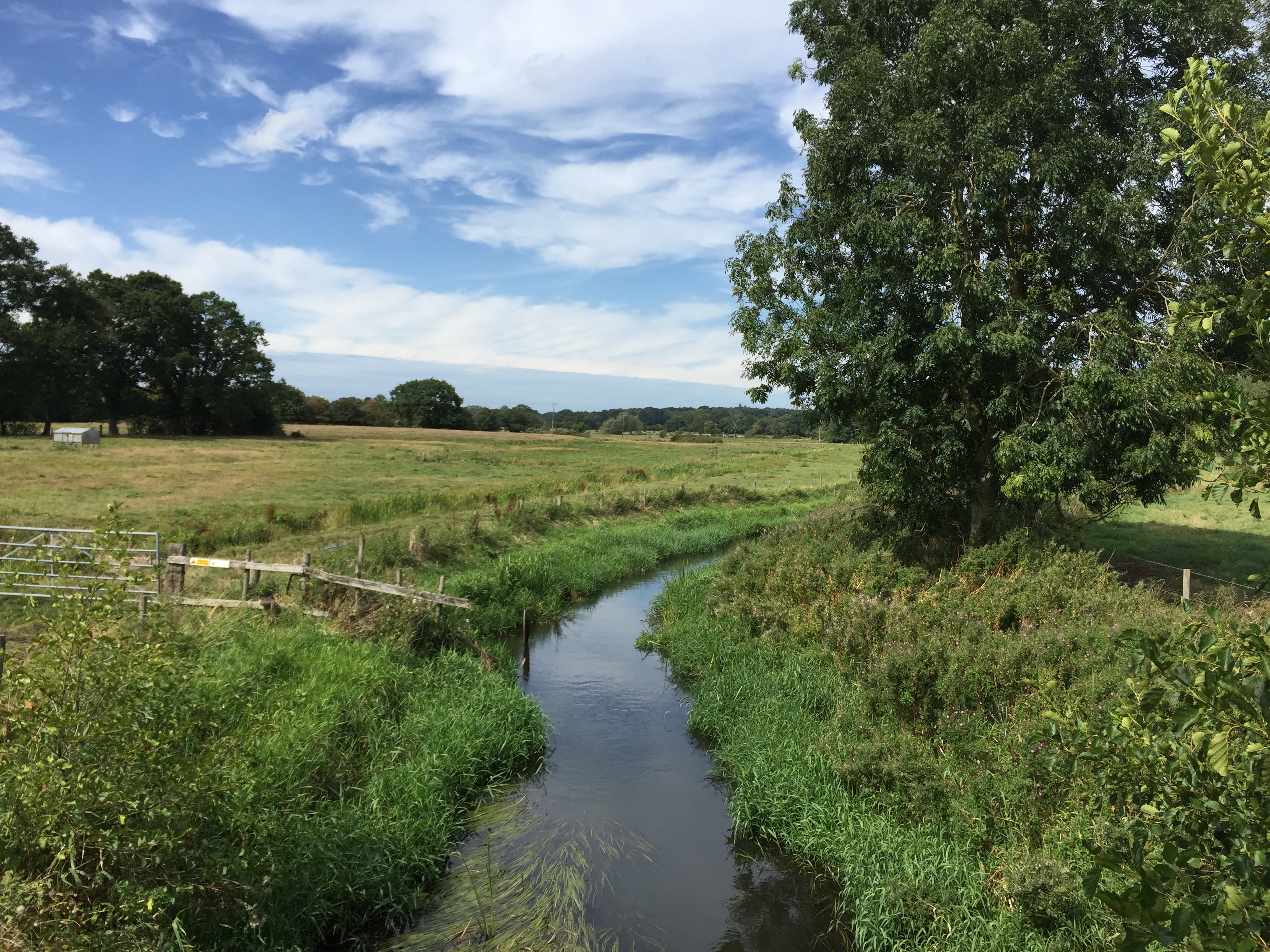 In September this year I went on a couple of walks in Norfolk, with the ultimate ambition to walk the whole of the Norfolk Coast Path. I had done small bits of it before (see here and here), and since the days were long the late summer seemed the ideal time to tackle this project. Ultimately I did not quite succeed, and there remains a 9 mile stretch of the path I have yet to walk, for reasons that will be explained in a later entry.

In order to kick off this undertaking I decided to go on a two-day walk with a stay in a youth hostel in between. This allowed me fit in another item on my to-do list, namely to take the Bure Valley Railway from Wroxham to Aylsham. This is a narrow-gauge steam railway whose one terminus is connected to the national rail network, whereas the other end is sufficiently close to the coast to walk there. This was ideal for my purposes, and so I booked a ticket.

When I arrived in Wroxham there was still a good deal of time left before the steam train would depart, so I strolled through the village. 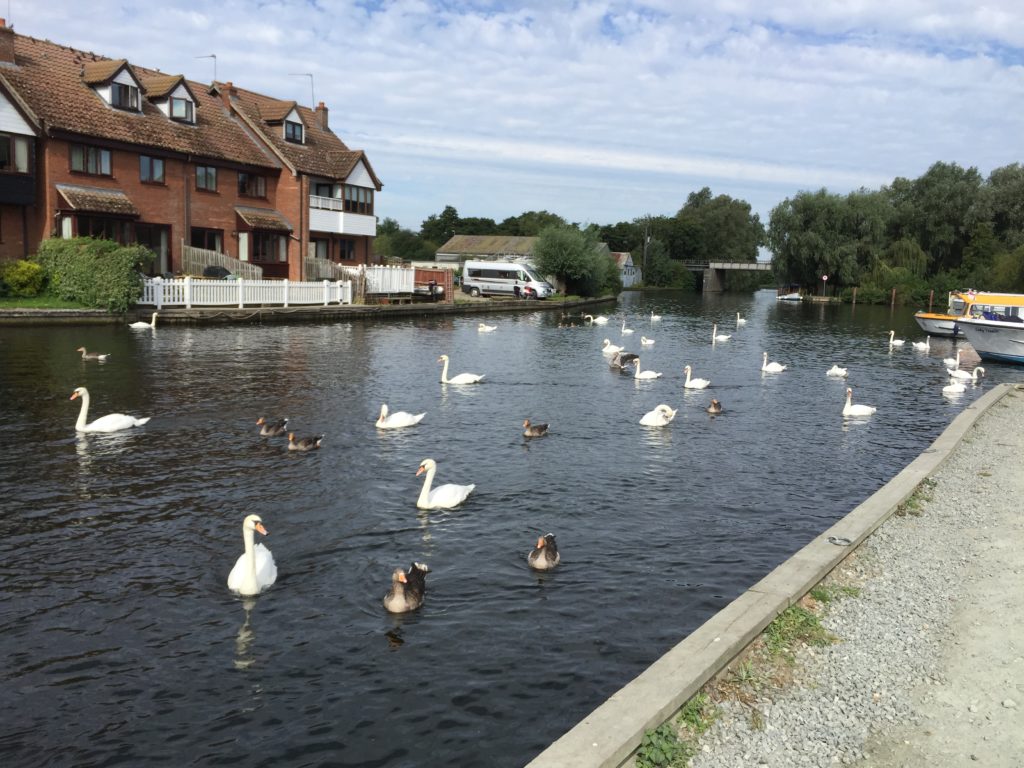 It is pretty and popular with tourists who want to explore the Norfolk Broads. While looking at the local shops I found that  it is possible to rent small motorboats here without any boating or driving licence, which I found surprising and intriguing. I ended up trying such a boat a couple of weeks later when C. visited, and it was indeed fun even though they are very very slow. My proudest moment on that trip was when I had to reverse into the parking area of a riverside pub with the boat. 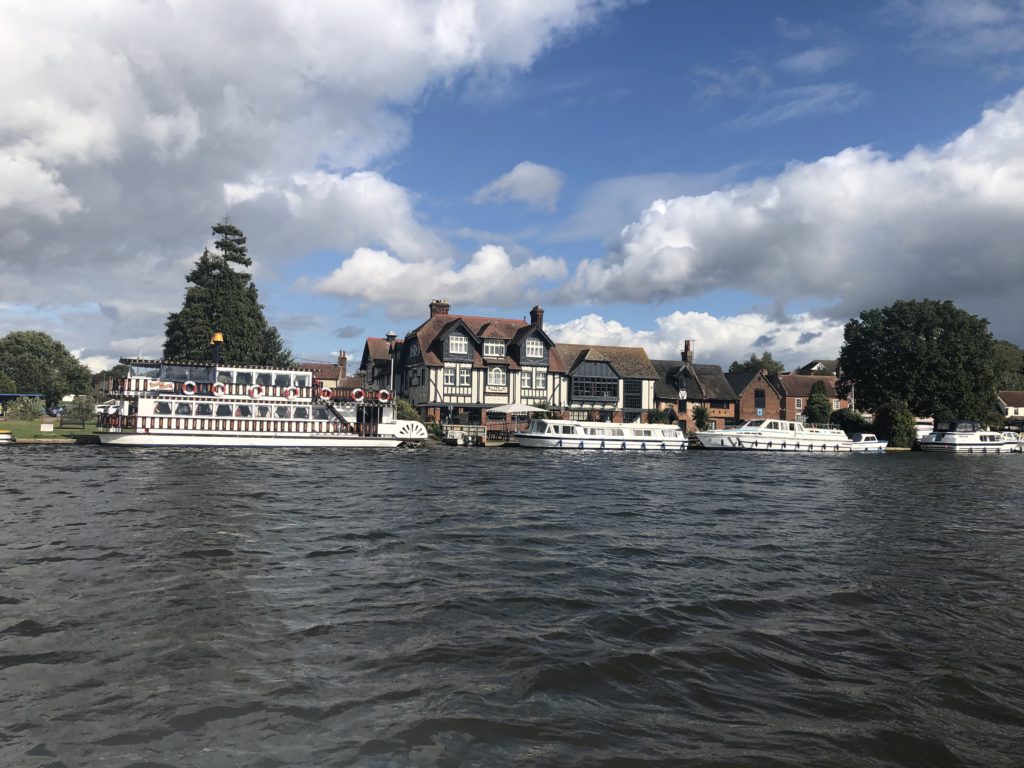 For now it was time to take the train though. I had never been on a narrow-gauge railway before, which is half the size of a regular train, and the carriages did look tiny when they drew in. 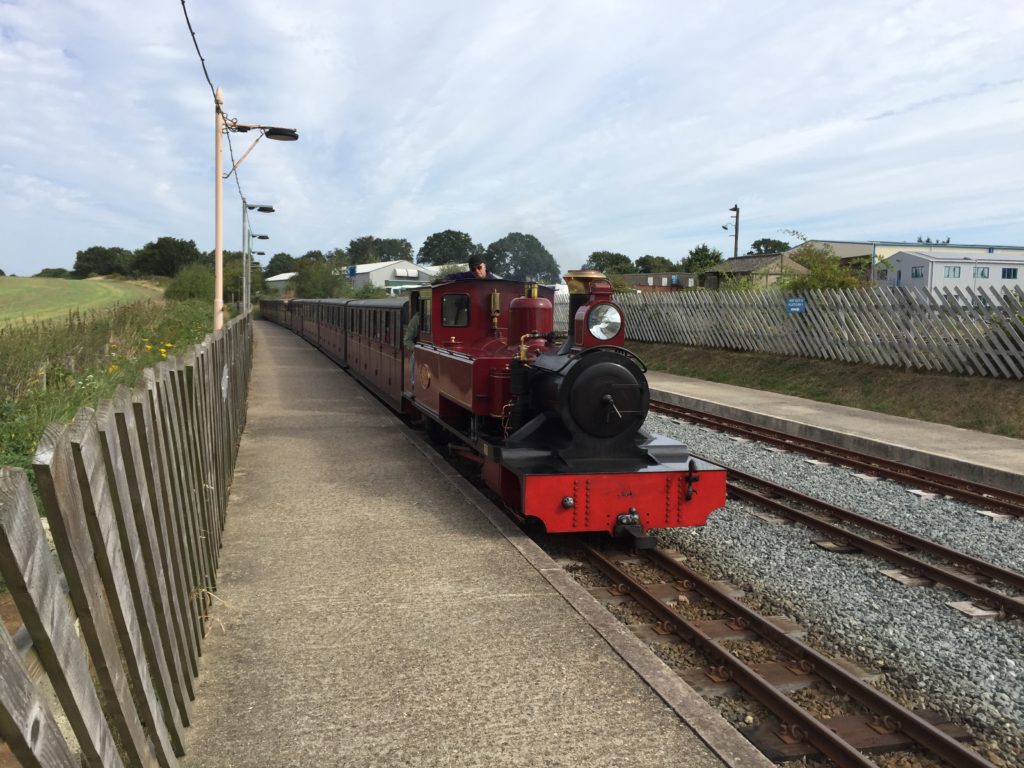 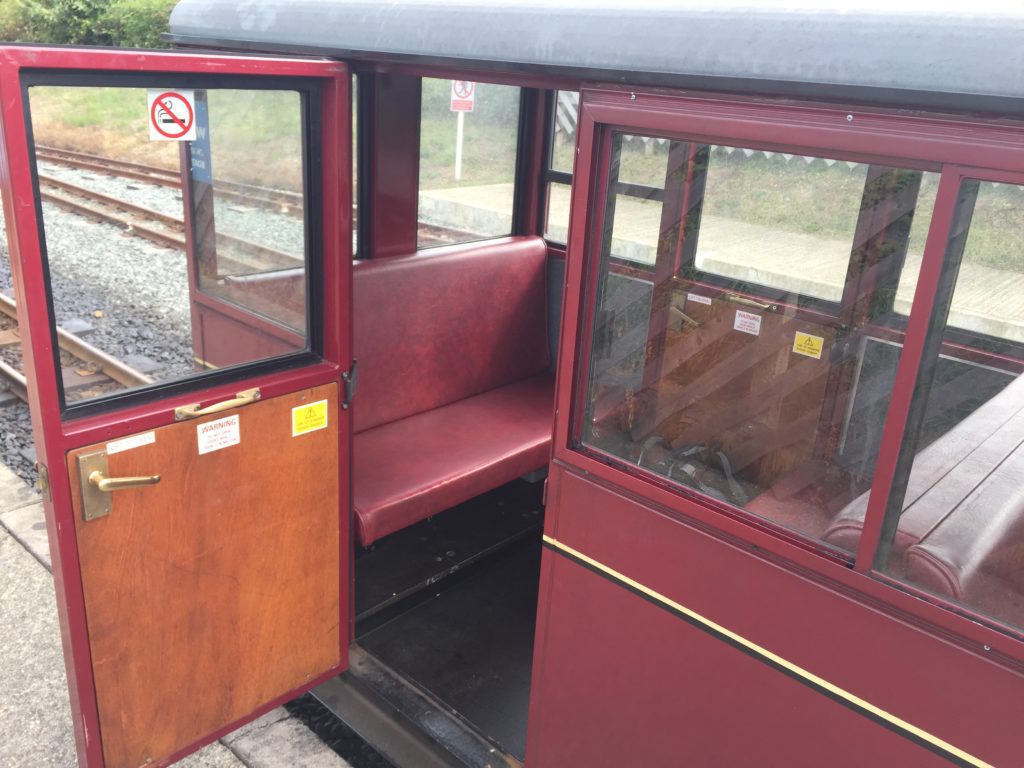 The train was very popular with families, where in many cases the parents appeared to be much more interested in the proceedings than the children. One father (who looked a bit like David Cameron) started to chat to the engine driver, and was clearly pleased when he could correctly name some of the components of the engine. I could sympathise with this excitement, and soon we started to head north. The ride was quite bumpy but enjoyable, with some nice views of the typical Norfolk countryside. 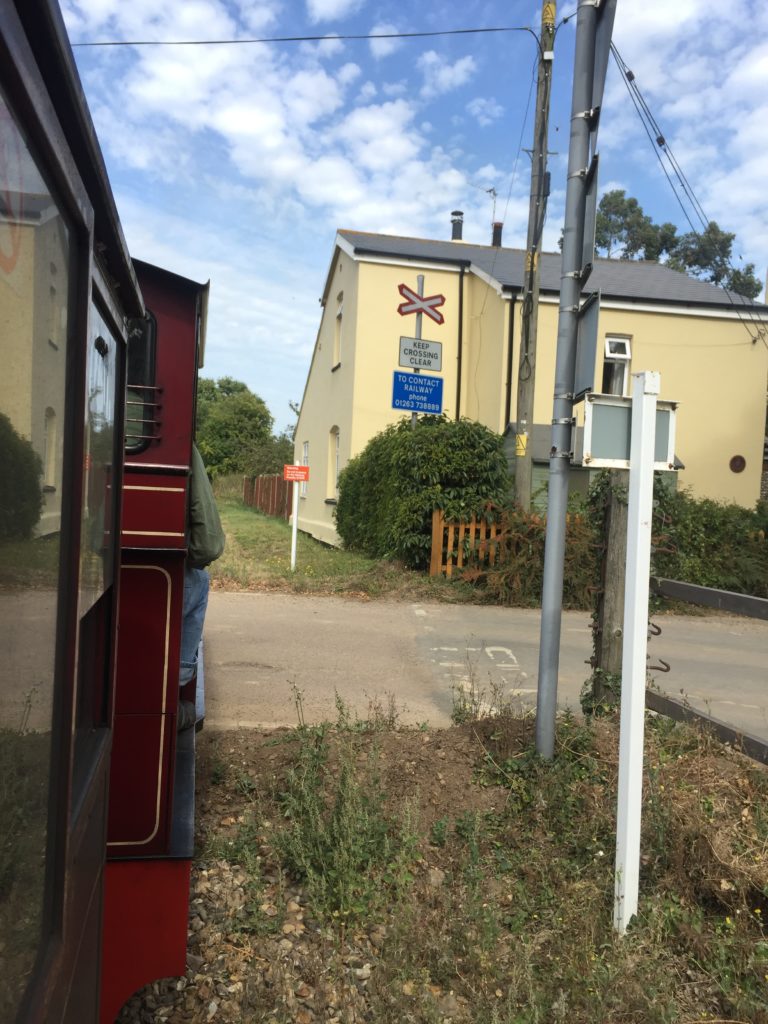 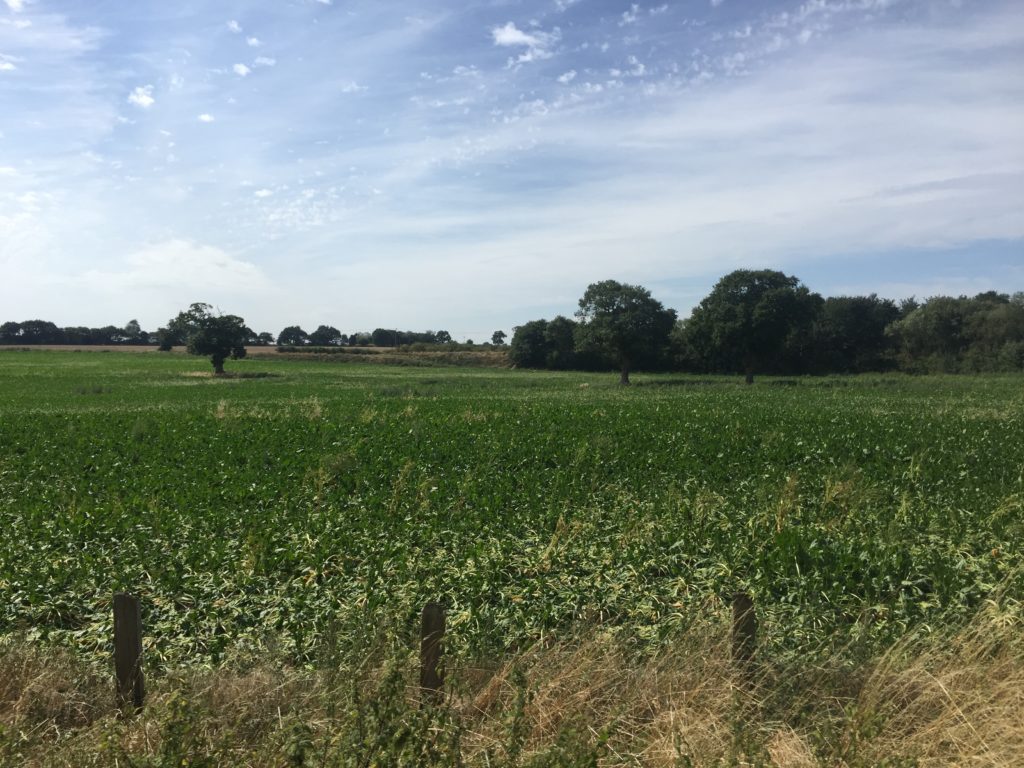 After arriving in the town of Aylsham I ate a sandwich for lunch in the shadow of the church, in order to be ready for the ~17 miles to the coast. This stretch is the northern end of the Weavers’ Way, whose southern terminus is Great Yarmouth. 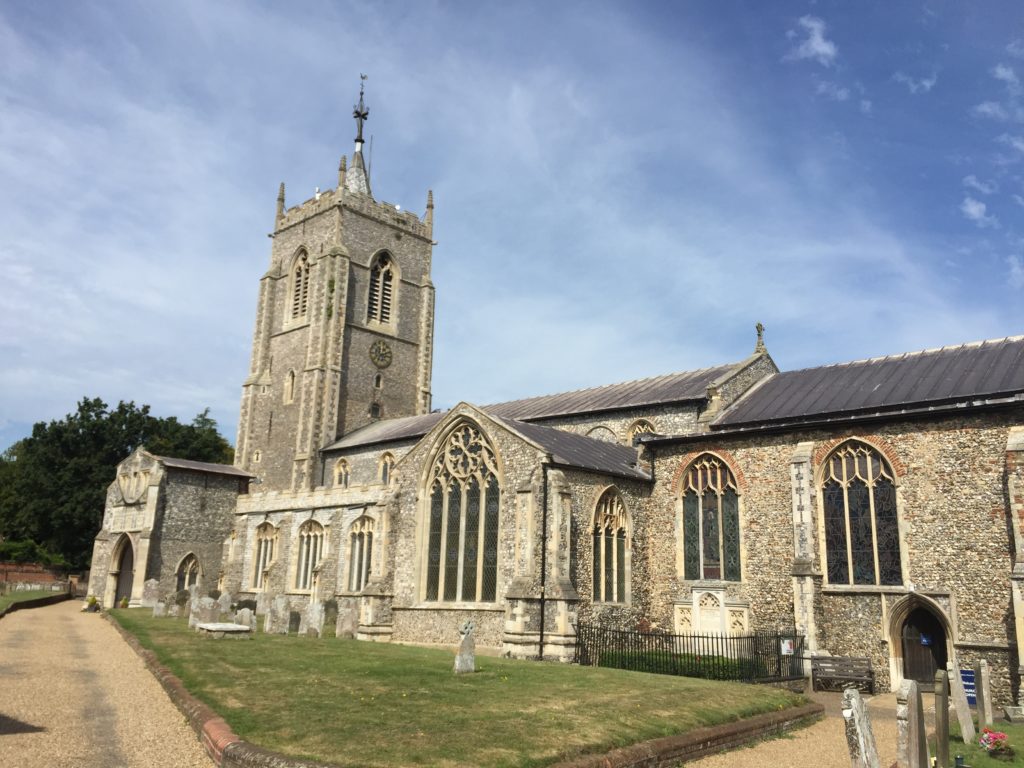 After sitting on various trains for several hours I felt full of energy and made swift progress. I soon passed Blickling Hall, one of the two stately homes on this walk. I did not pause here to have a closer look because I wanted to save time in order to reach the other stately home – Felbrigg Hall – before closing time. This was partly in order to have some tea in the late afternoon, but also because the latter was home to Wyndham Ketton-Cremer, who was known to be a great Norfolk enthusiast. I had brought his book “Forty Norfolk Essays” with me, which contains various Norfolk anecdotes from throughout the centuries. One I still remember concerned a local clergymen who became the target of vicious gossip for being too fond of custard, for instance.

The footpaths I walked along were pleasant and free of obstacles, apart from some cows blocking the way. The landscape here even featured some gently rolling hills, and I came across a church with an unusual round tower. 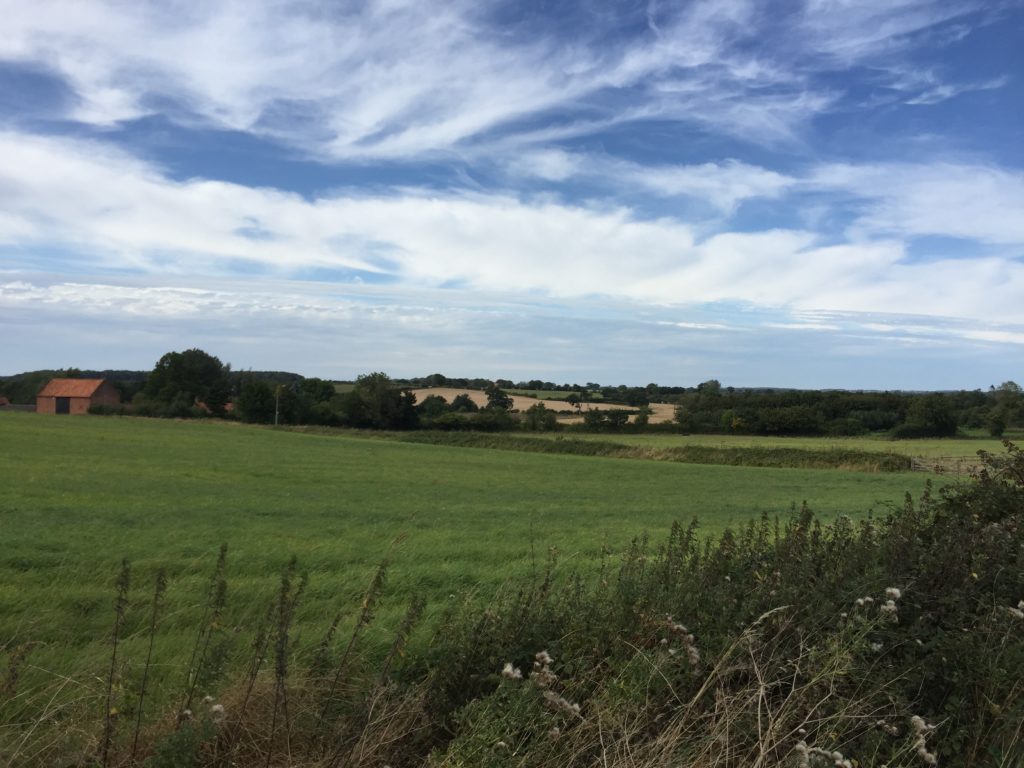 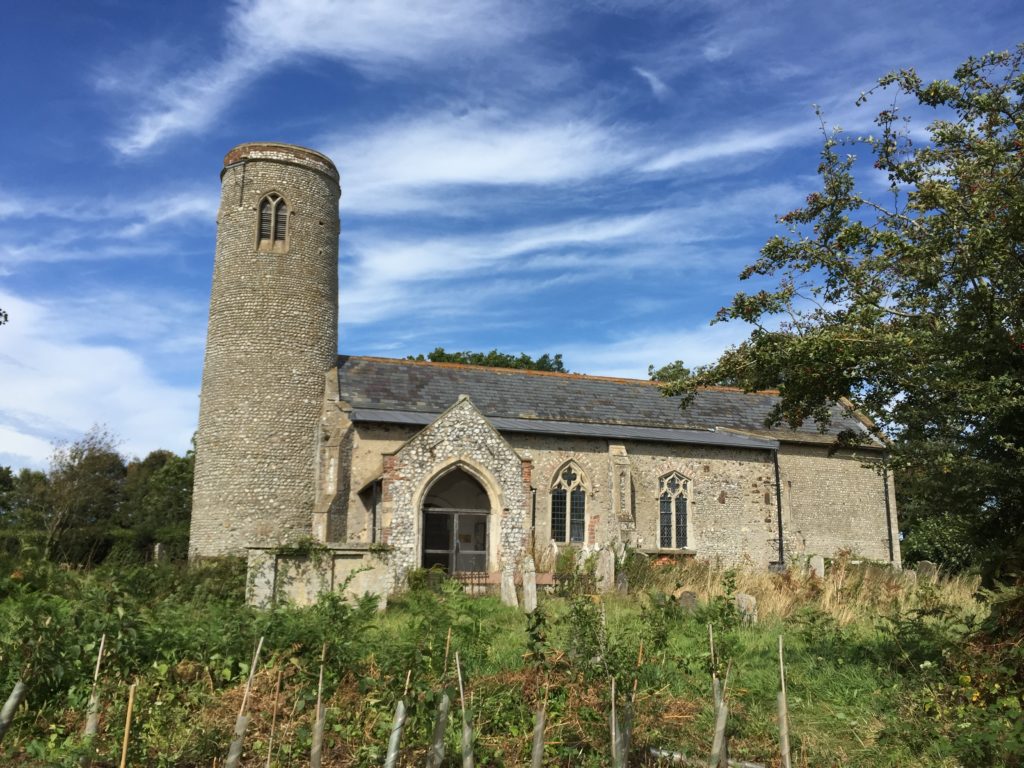 While walking along a country lane I encountered a sign that said “Slow You Down”, which struck me as rather unidiomatic (even though I’m not a native speaker). I later learned that this is an instance of the local Norfolk dialect, and apparently a number of other Norfolk villages have started to put up these signs as well.

Shortly afterwards I passed through the tiny and quaint village of Hanworth (not this one), where a village fête was in progress. Nearby I saw this milk box, and I couldn’t walk on without checking whether it contained any milk bottles (which it did). 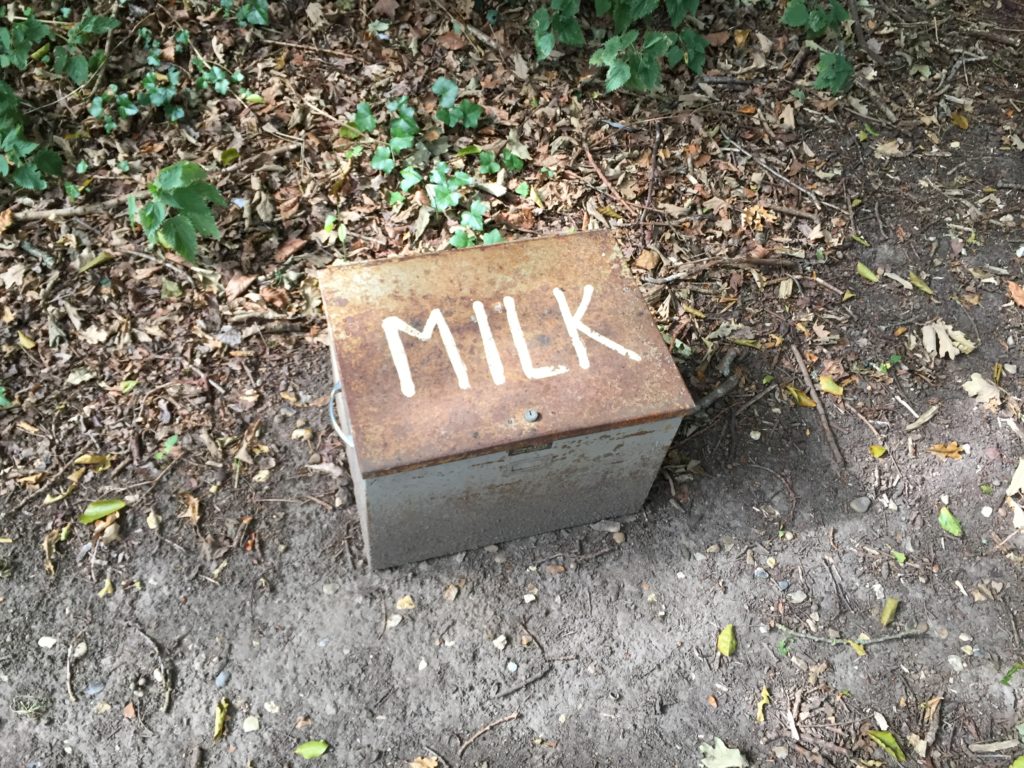 As mentioned before my plan was to have some tea at Felbrigg Hall, where the café closes at 4pm. I had lost some time after taking a wrong turn due to not reading the map carefully enough at one point, so I started to doubt whether I would make it. I increased my walking speed for the last mile and just about succeeded, ordering my tea 10 minutes before closing time. 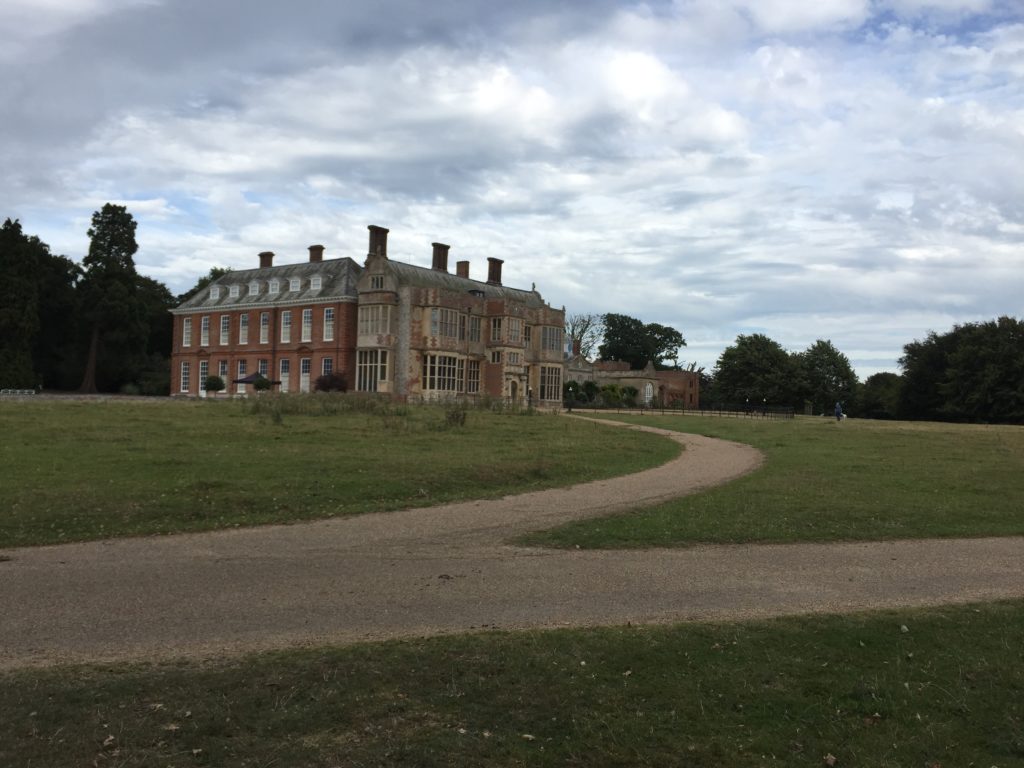 The Weavers’ Way I had been following leads to Cromer, but my intended destination was Sheringham, where I had booked the youth hostel. After Felbrigg Hall I thus left the Weavers’ Way to follow some unnamed footpaths to the coast. This was more adventurous than anticipated, for one of them led me through a variety of fields with different crops, and with each the actual path became harder to spot: 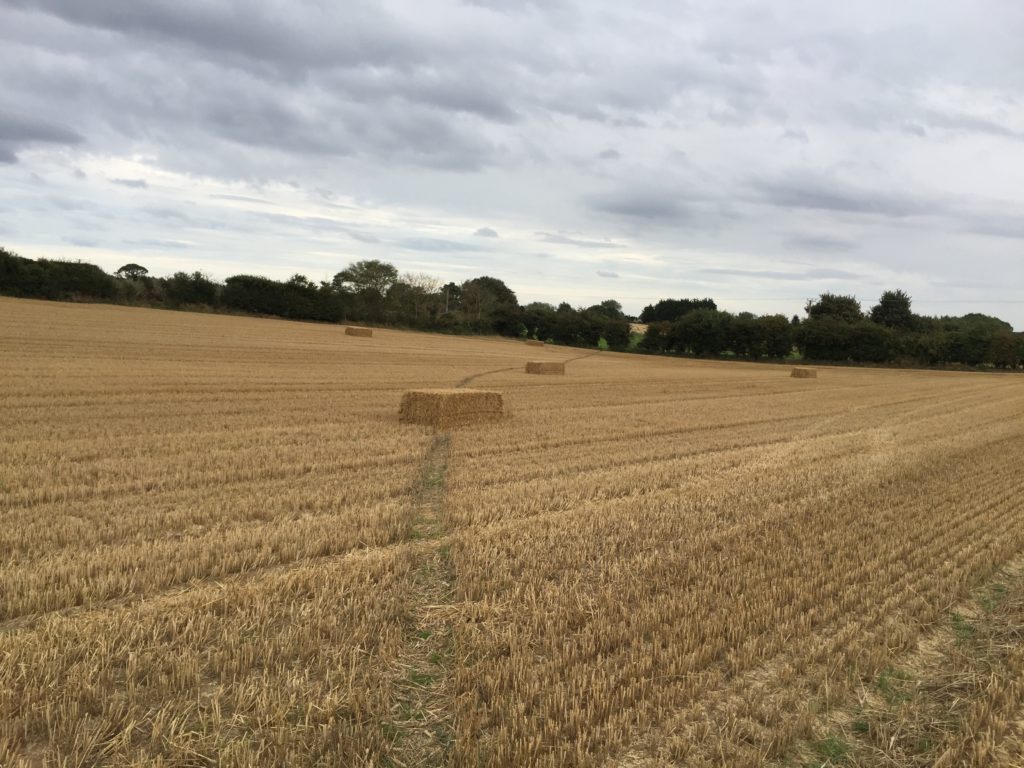 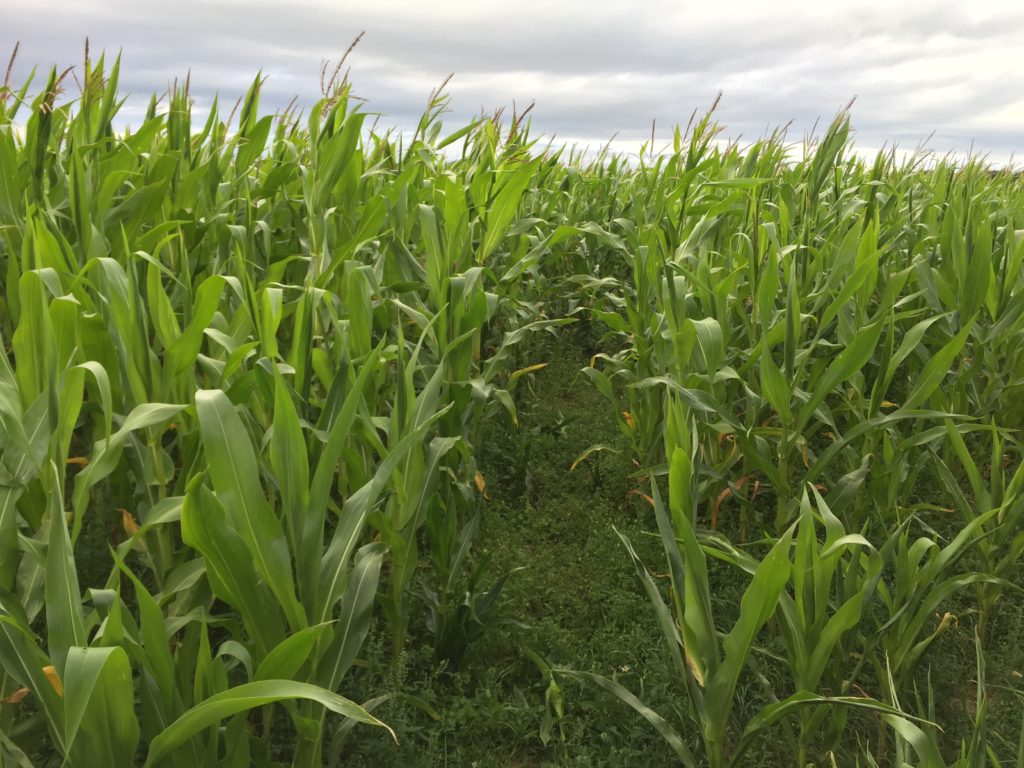 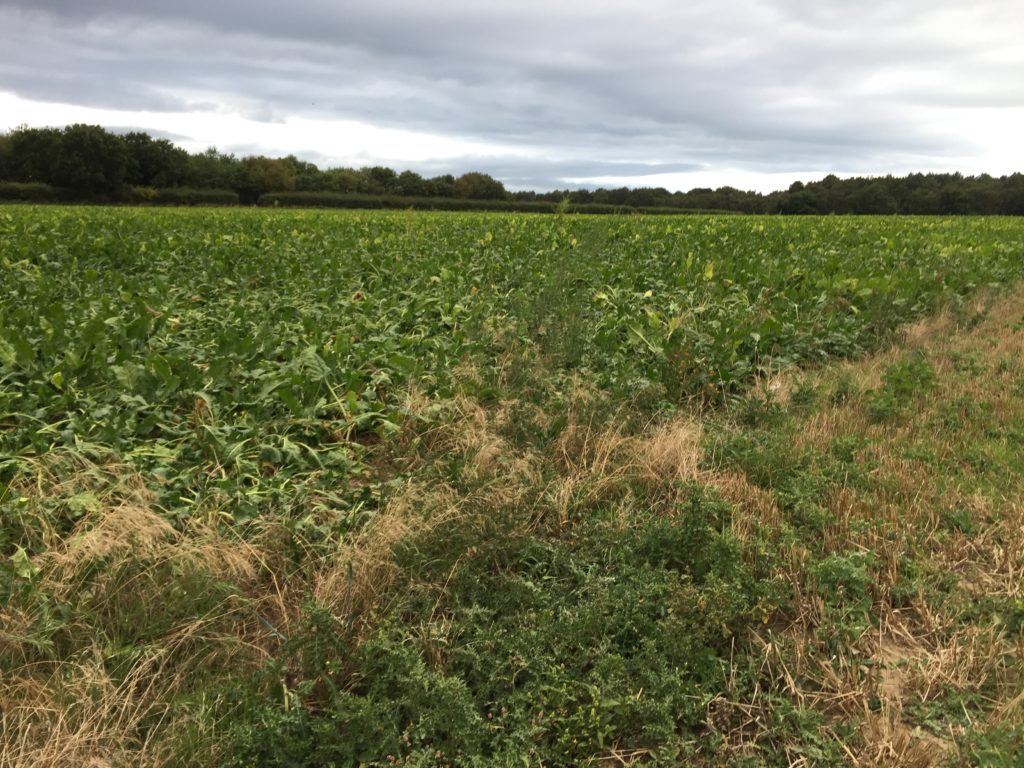 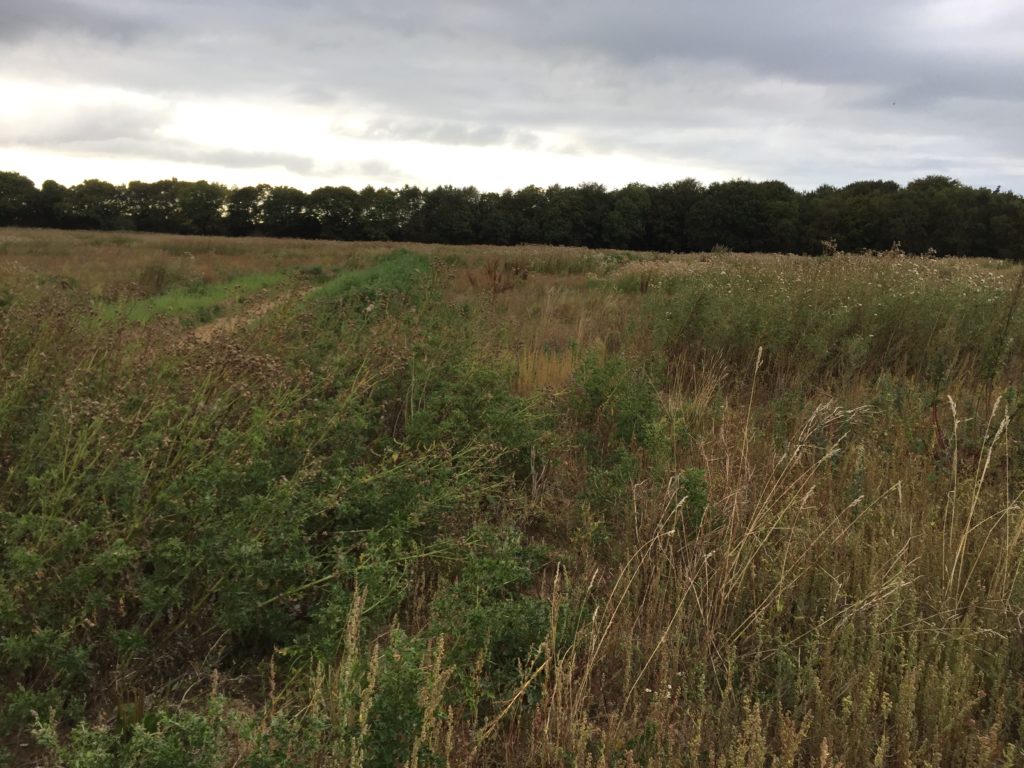 I ended up in a woodland with so many different paths that I lost track of where I was, so I walked in the direction that intuitively seemed correct. This worked surprisingly well, and I eventually arrived on Beeston Regis Heath, from where I could see the sea for the first time. 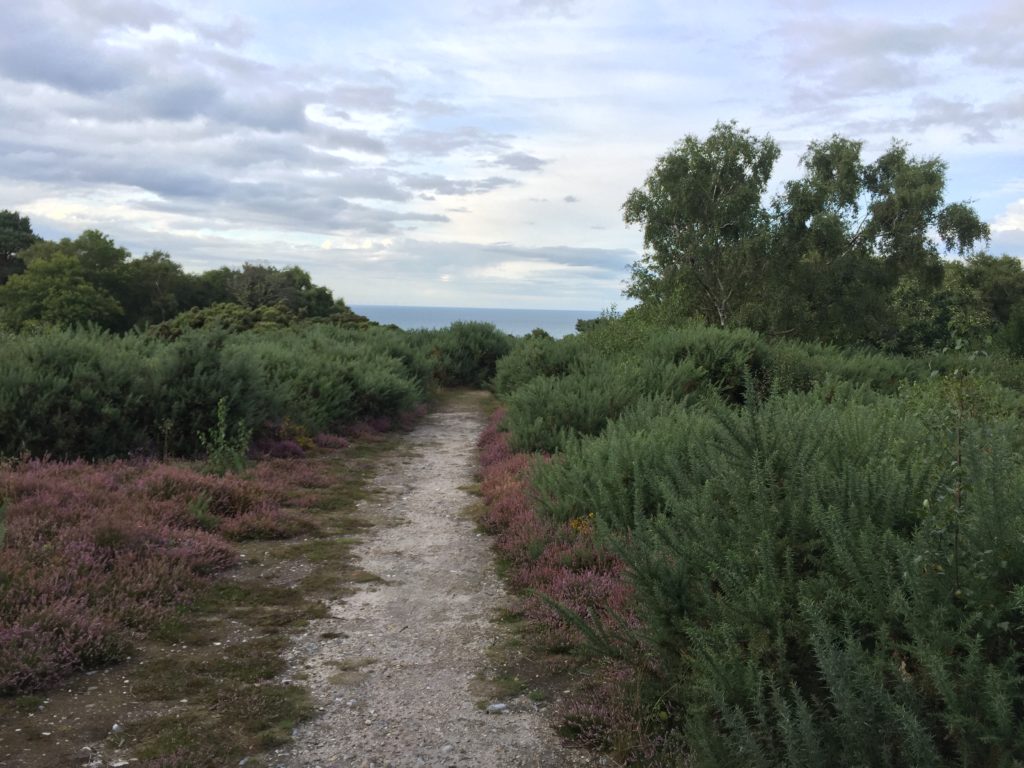 By now I had walked more than the 17 miles I had anticipated, and so instead of continuing all the way to Sheringham I went to West Runton railway station to take the train for the last few miles. After checking in at the youth hostel I was very hungry, and went into town to get some fish and chips. There were various shops, but while most were completely empty one was crowded and full of people, so I trusted the instinct of the the masses. I did not regret this decision, and enjoyed my dinner while watching the sunset at the beach. 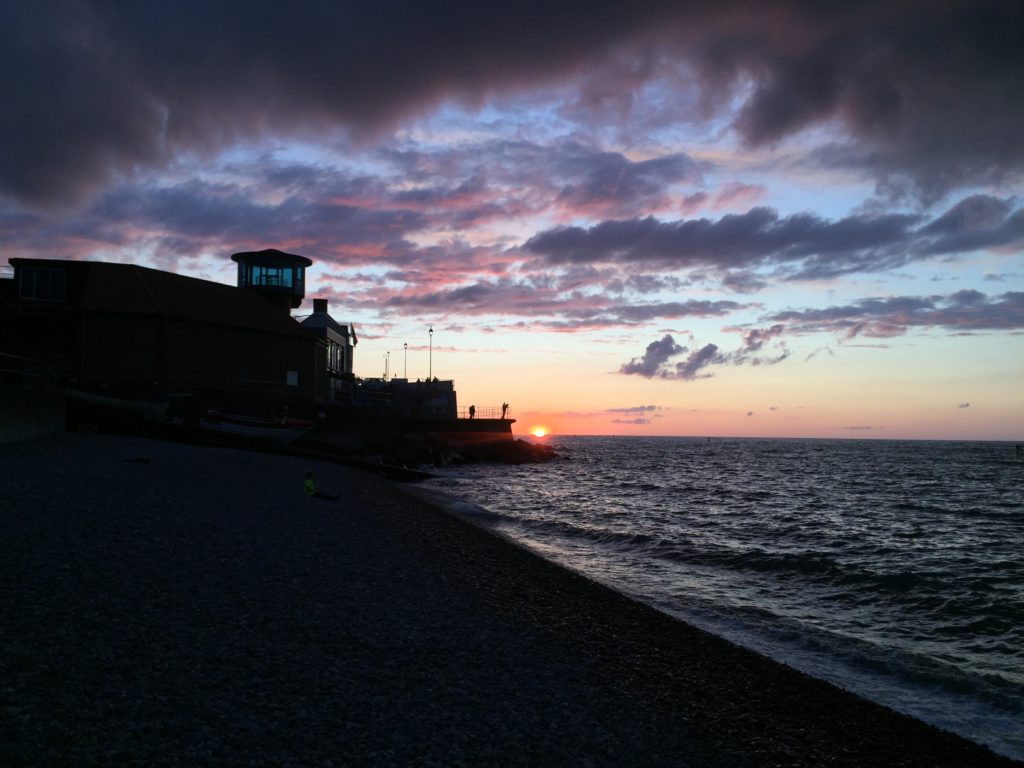 2 thoughts on “Towards the Coast by Steam and Foot”