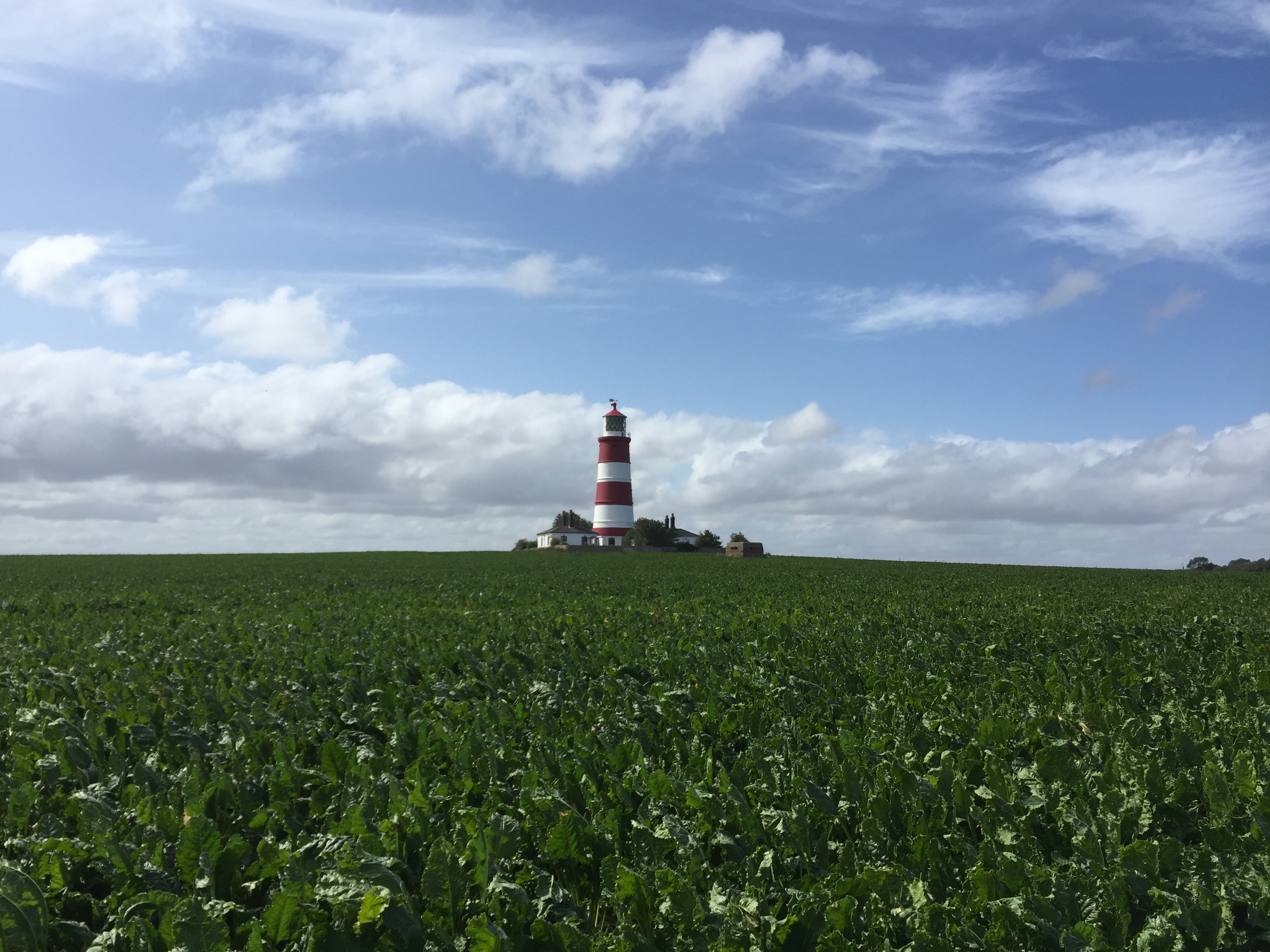 This entry concludes my three-part series on the Norfolk Coast Path, and I will describe the less popular section between Mundesley and Winterton-on-Sea. It is apt to describe this eastern route as the wild side of Norfolk for two reasons: first, the sea here is much rougher than in the quiet north of the county, and hence many coastal villages are threatened by erosion. Secondly, while in general the Norfolk coast is well served by public transport (especially compared to the Suffolk coast), there is virtually no bus running between Mundesley and Winterton-on-Sea (technically there are a few buses to Happisburgh and Sea Palling on weekdays, but not at times convenient for walkers). These 15 miles thus need to be walked in one go.

I took the train to North Walsham and made the very tight connection for the bus towards Mundesley. I had been there before in order to walk in the other direction to Cromer, which was very scenic:

Since then several instances of coastal erosion have been reported in the news, however, so I am not sure whether the route I took then is still possible. At various points the path had been quite close to the edge of the cliffs.

I also anticipated issues with the Norfolk Coast Path east of Mundesley, since I had read about a diversion due to a novel and extensive sandscaping scheme. It seemed that the work on the beach around Bacton had already been completed, however, since I did not encounter any closed sections on the way. 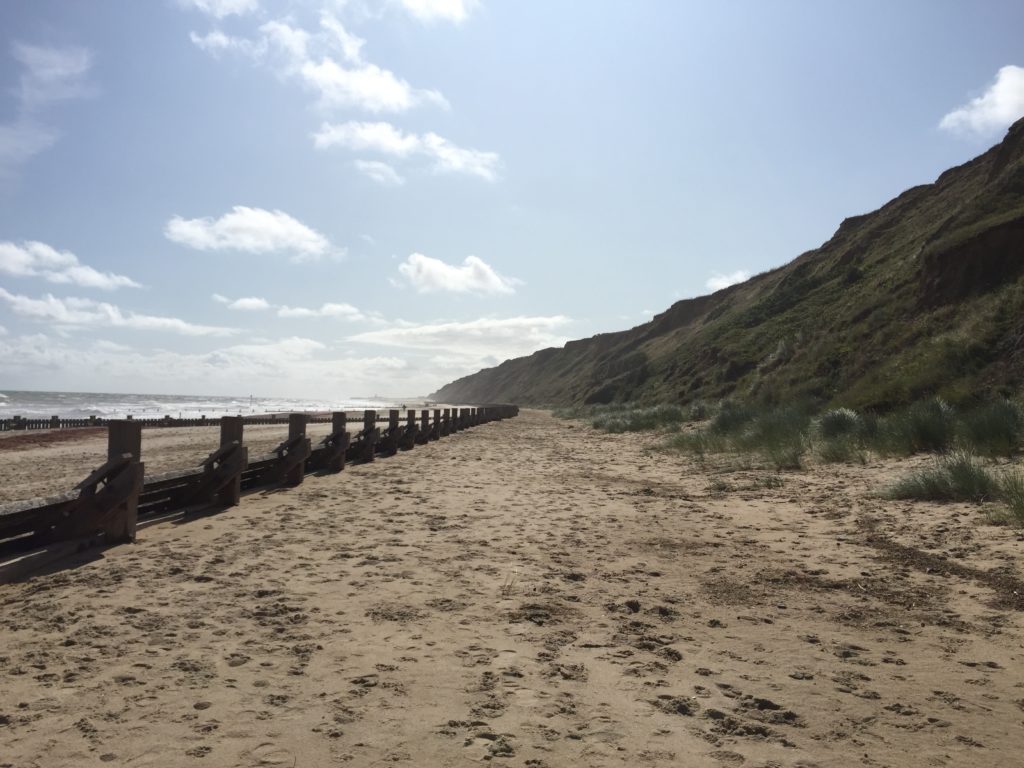 For the first few miles the path is on or right next to the beach, and I did not pay too much attention to the map. This proved to be a bad move, however, for I missed the spot where the coast path turns inland. Instead I continued to walk along the beach, which got narrower and narrower. 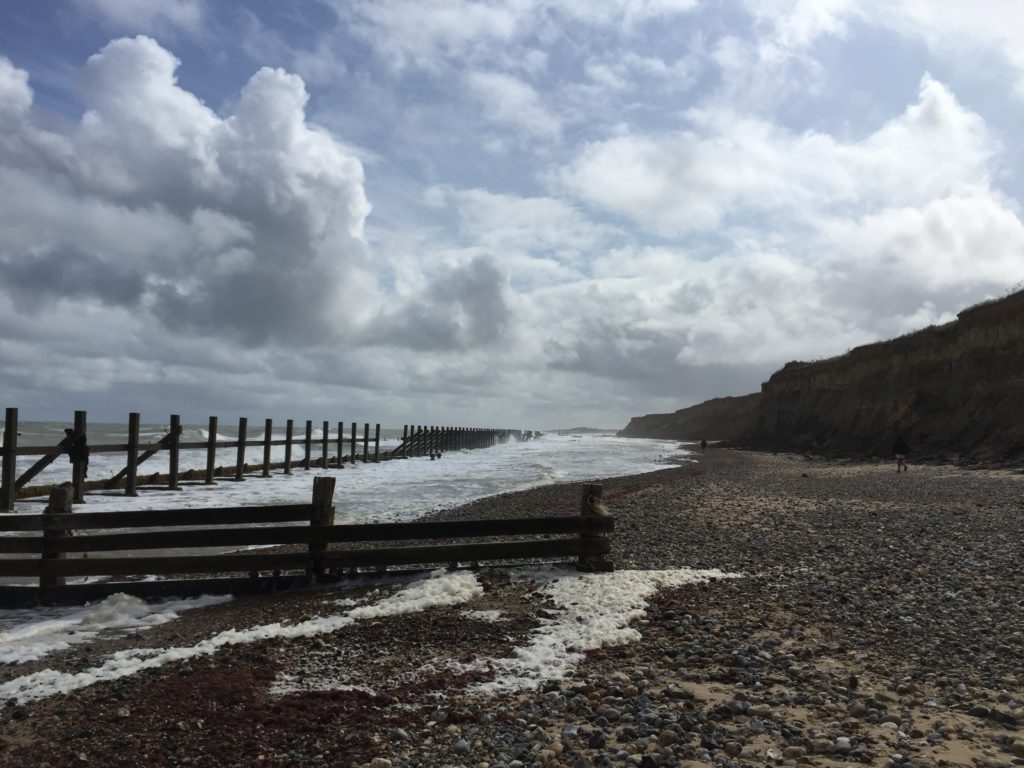 Eventually I could walk no further – the tide was also rising – and it dawned upon me that I must have made a mistake. 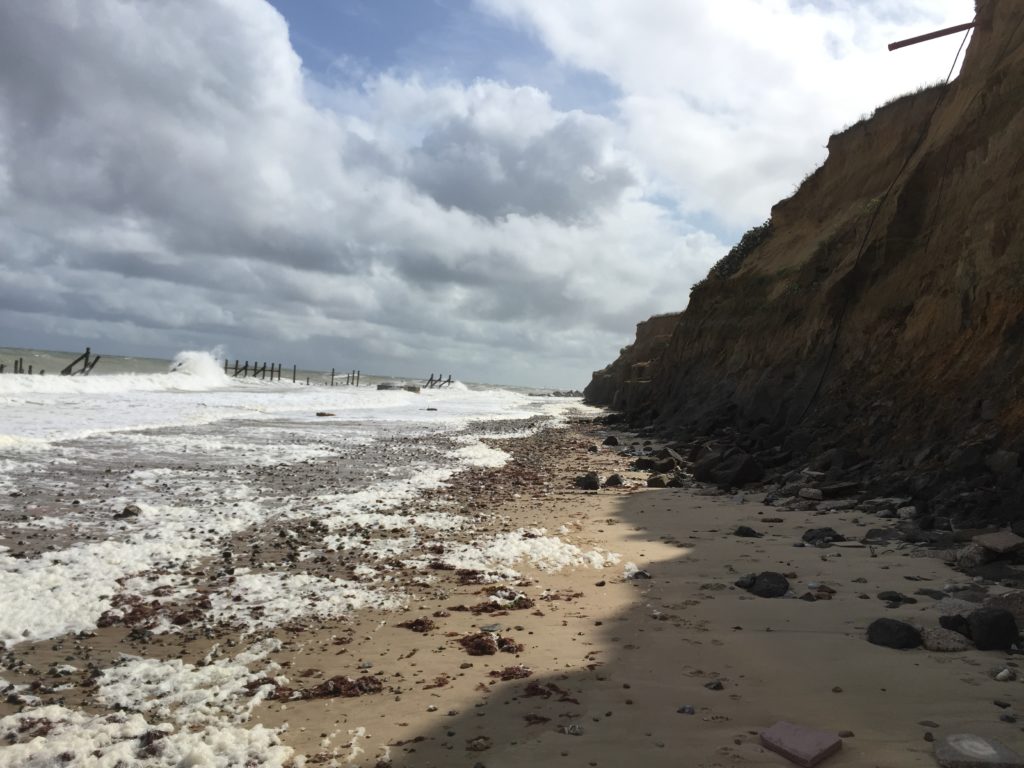 I checked the map carefully and indeed, I should be on top of the cliff instead of the beach. I felt unenthusiastic about walking back the last few miles, however, since walking on the sand was not that enjoyable. I thus seriously considered trying to climb the cliffs, but quickly abandoned this project on account of being dangerous and foolish. 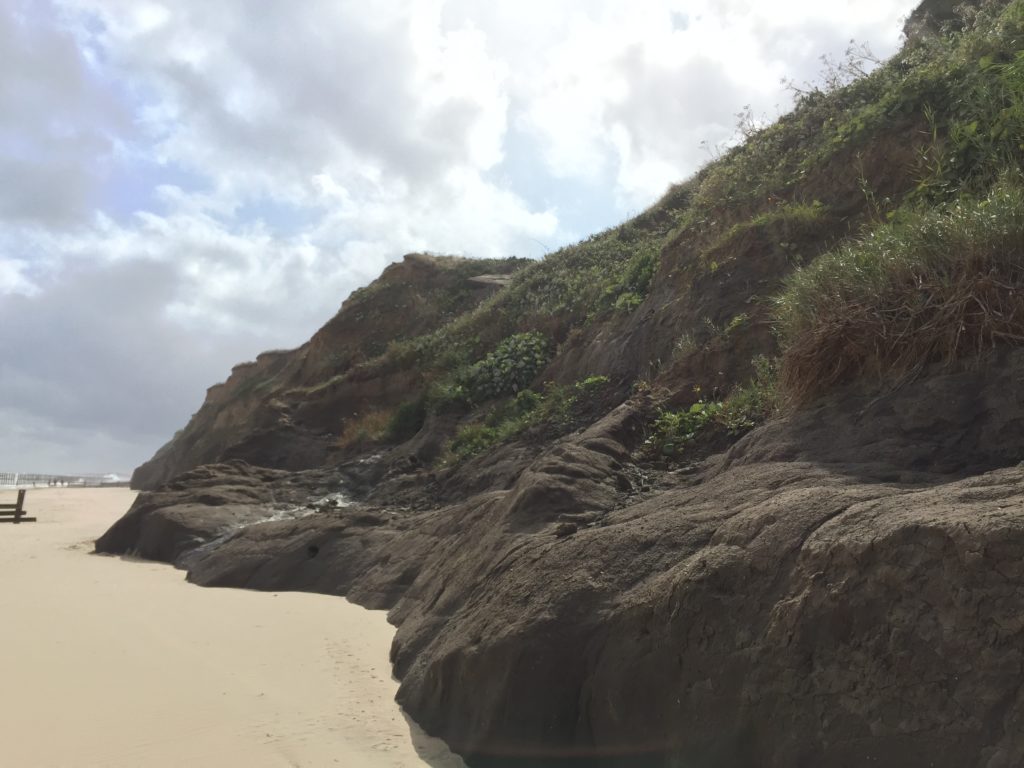 There was thus no choice but to double back, and eventually I reached the official path at Ostend Gap. 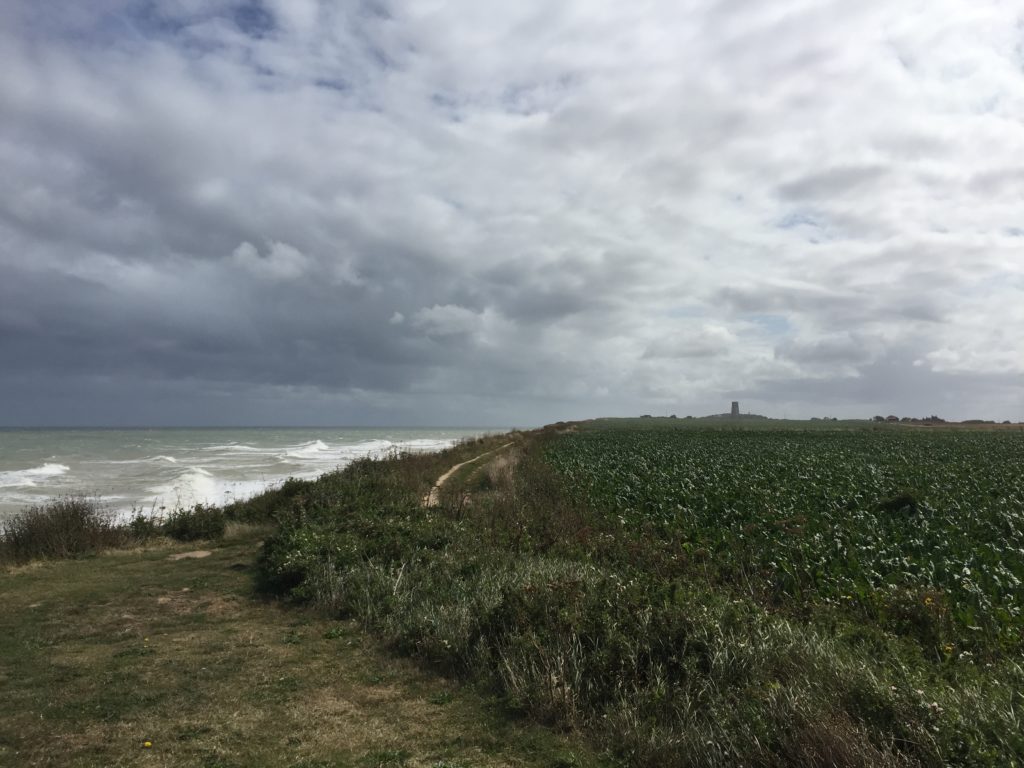 I really enjoyed this part of the walk: there were roads leading and signs pointing nowhere due to land being lost in coastal erosion. In addition, several abandoned caravans, together with high waves hitting the cliffs down below, created a unique atmosphere. 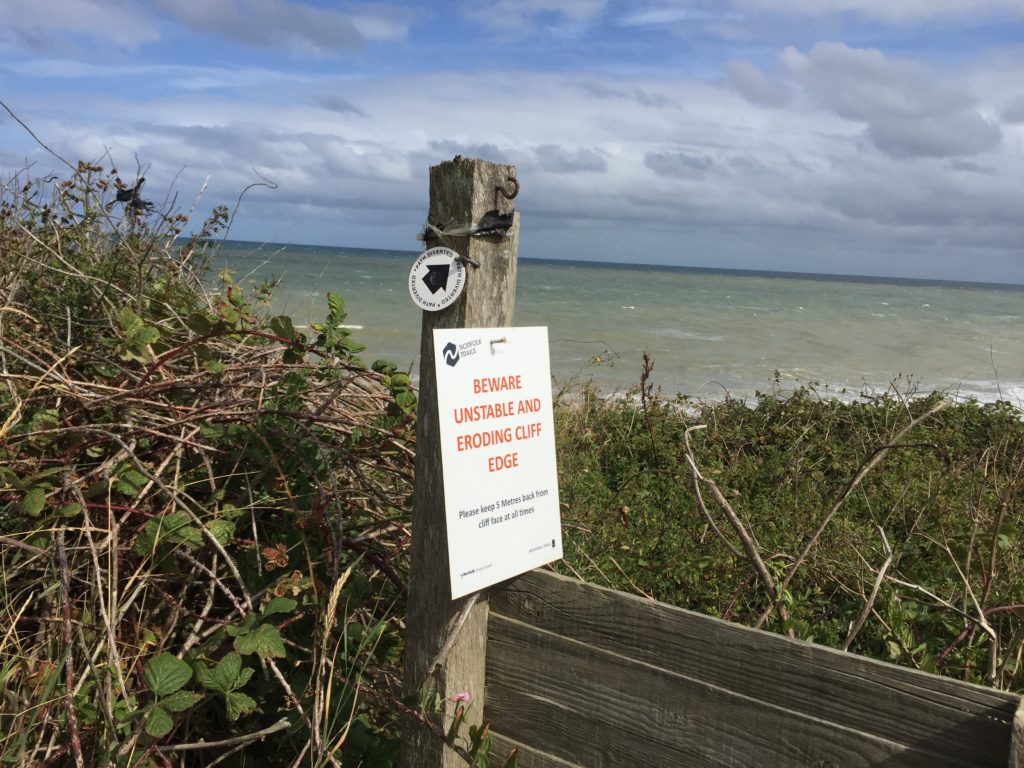 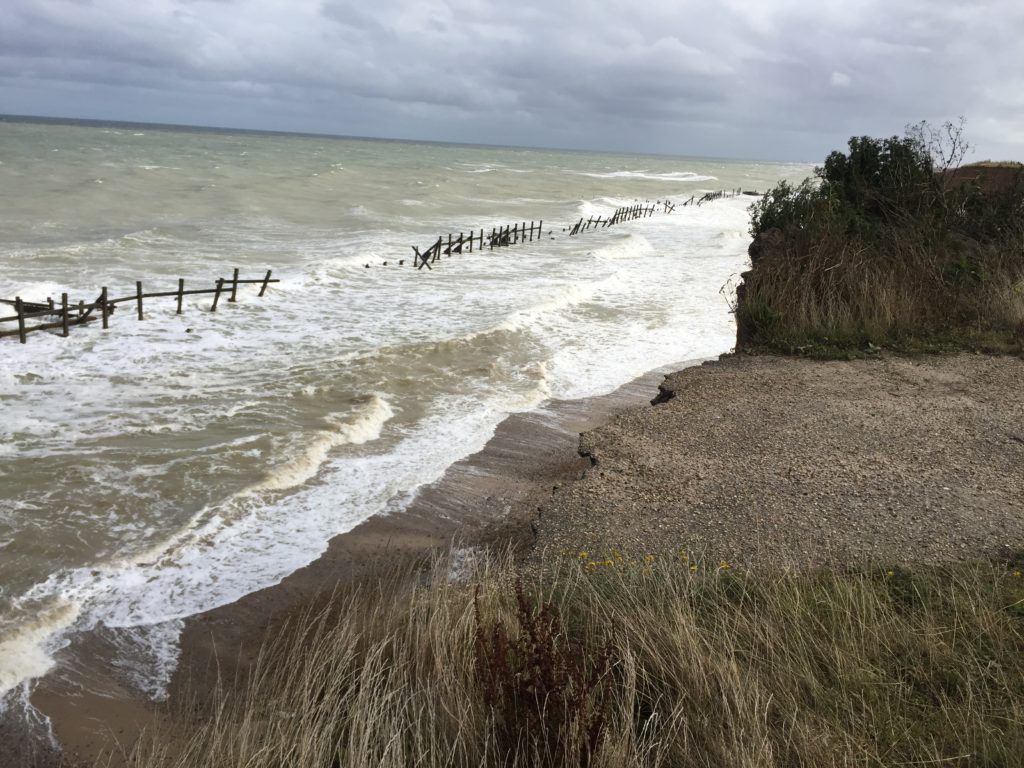 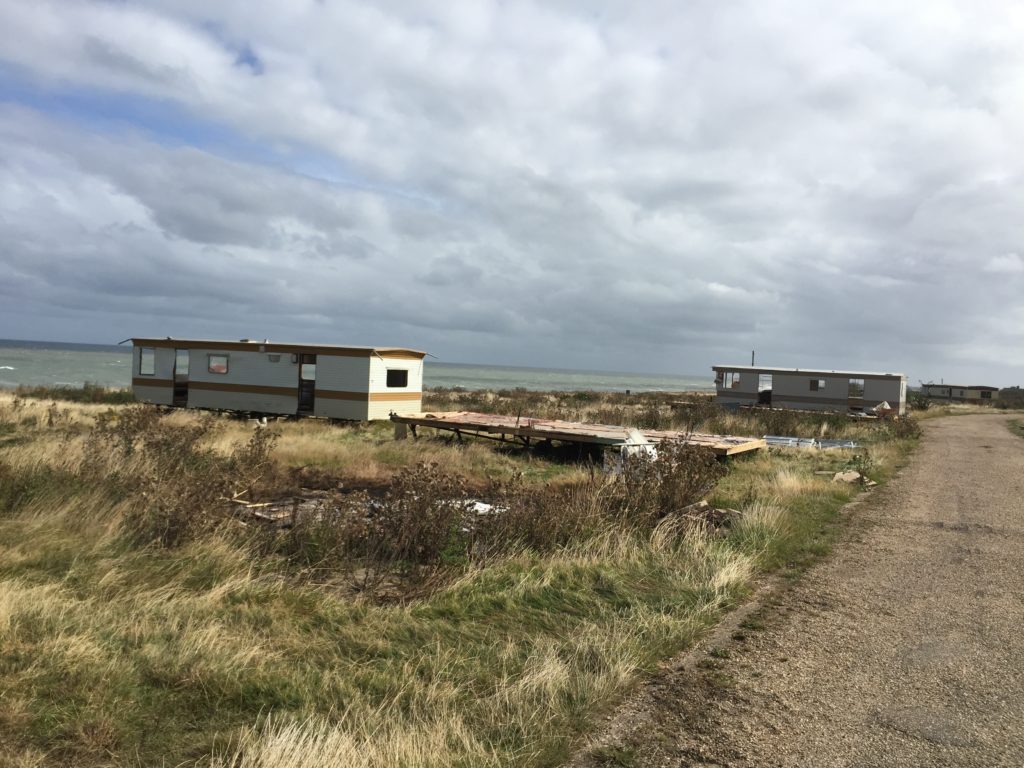 I then arrived in Happisburgh, which has a very nice lighthouse that can be seen in the header image. The pronunciation of the name of this village is surprising: Haze-bruh. Walking on the cliffs continued to be thrilling: 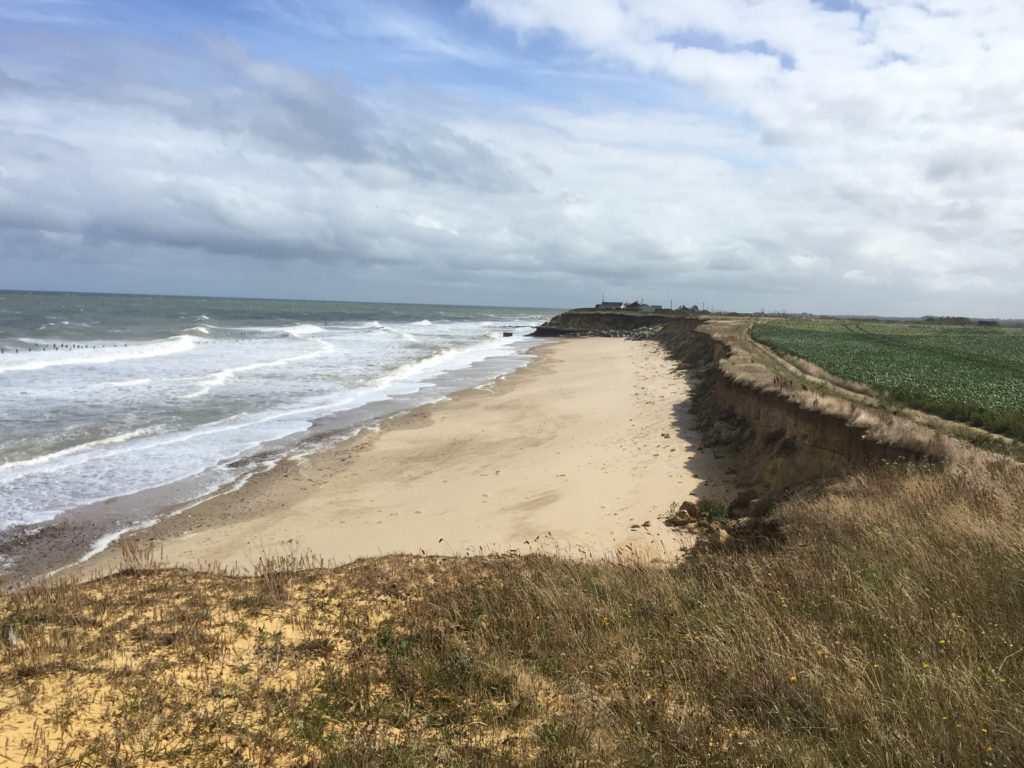 At some point the coast path rejoined the beach, however, which was worrying. The tide was at its peak now, and from where I was standing I could not make out whether walking on the beach might not lead to a dead-end as before. 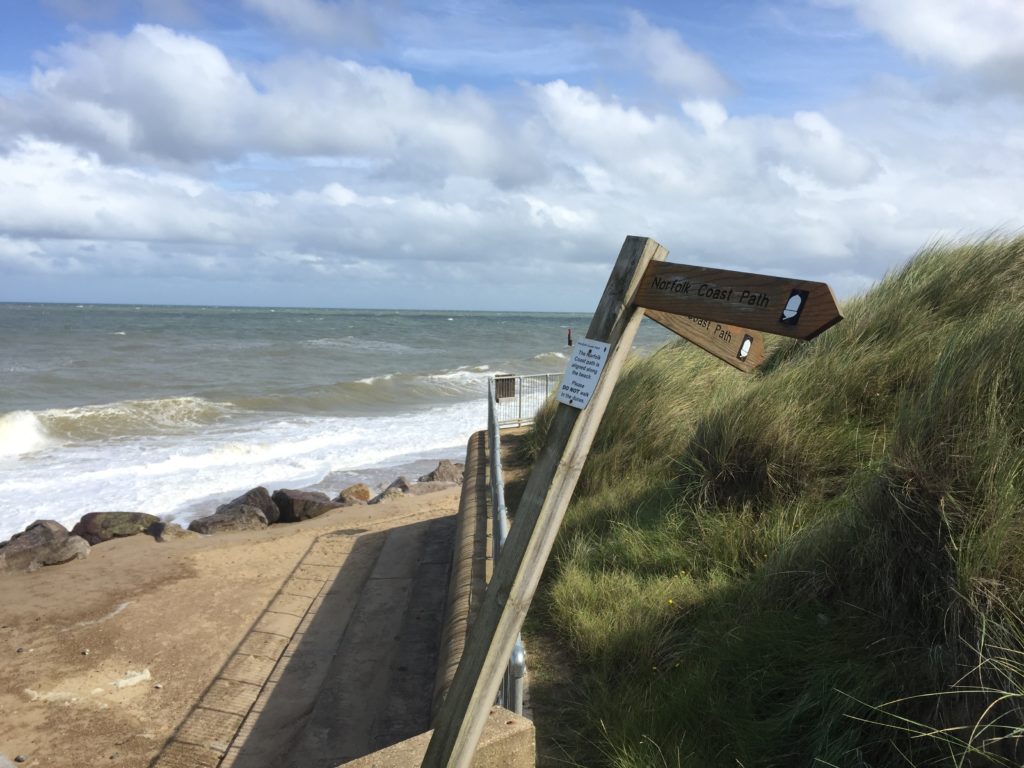 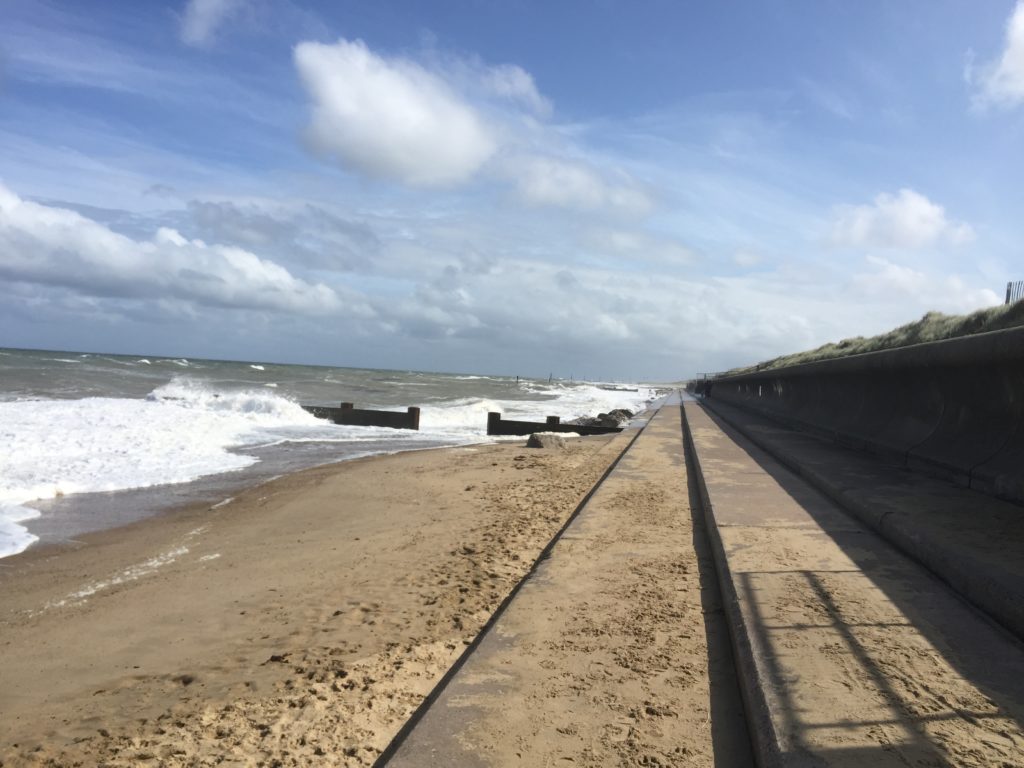 In light of the earlier experience I opted for the safe but slightly boring alternative inland route. In hindsight this might not have been necessary, as I saw some dog walkers who seemed to have made it on the beach route.

Eventually I re-joined the beach which had gotten much wider at that point. In the distance I could see some of the nine coastal defence reefs which were built in the 1990s to protect the village of Sea Palling. 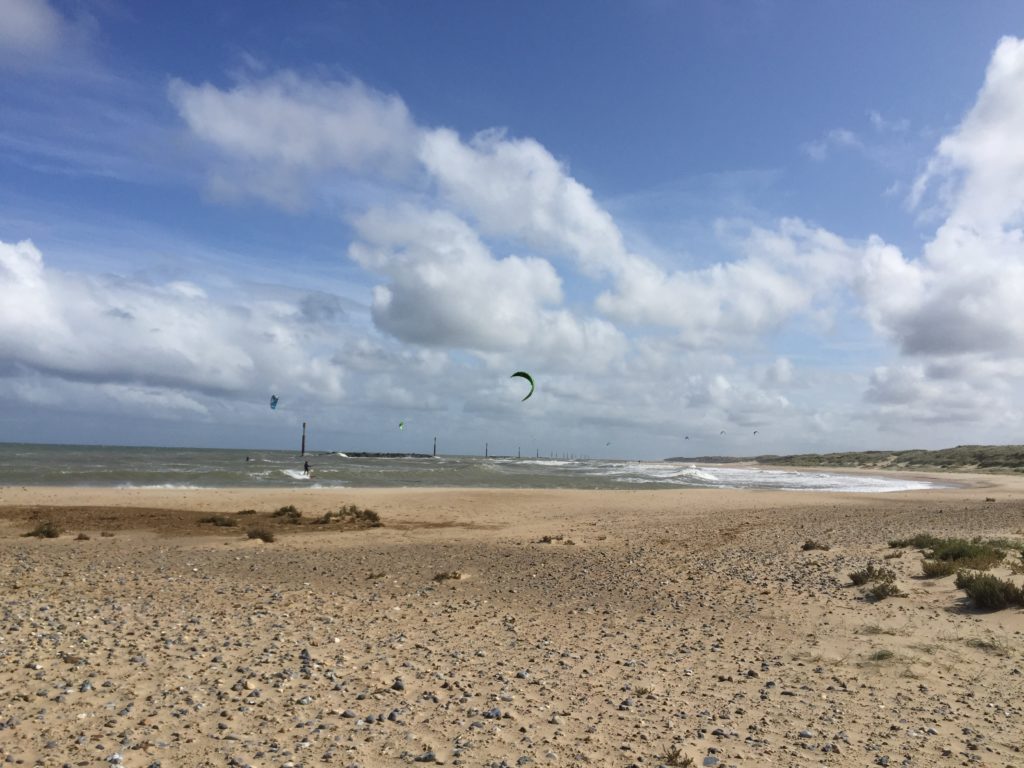 After Sea Palling the path leaves the coast and continues behind the dunes, which made this part of the walk less exciting, apart from some oddities on the way. 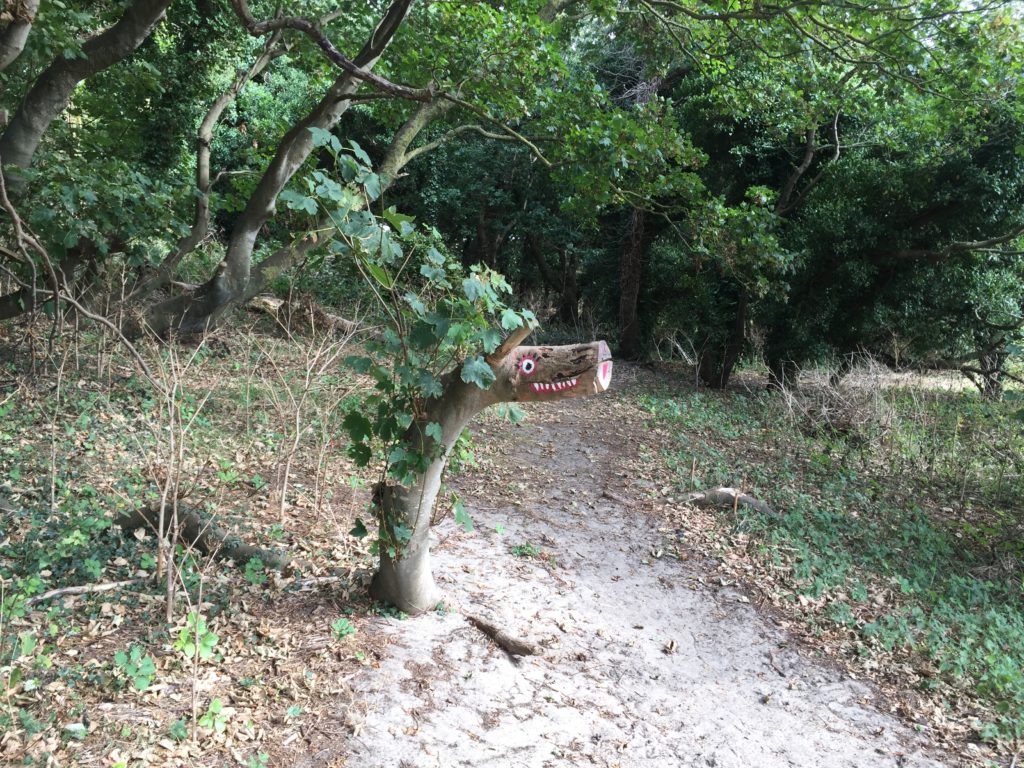 I walked quite quickly and had soon reached Horsey Gap, which is famous for its seal colony. (There’s also a good windmill nearby). I had already been here on an earlier occasion to look at the seals, and this time I followed the official path instead of going back to the beach. This was because I had planned to have a coffee break at Winterton, but time was tight because of my unplanned extension of the walk earlier that day. 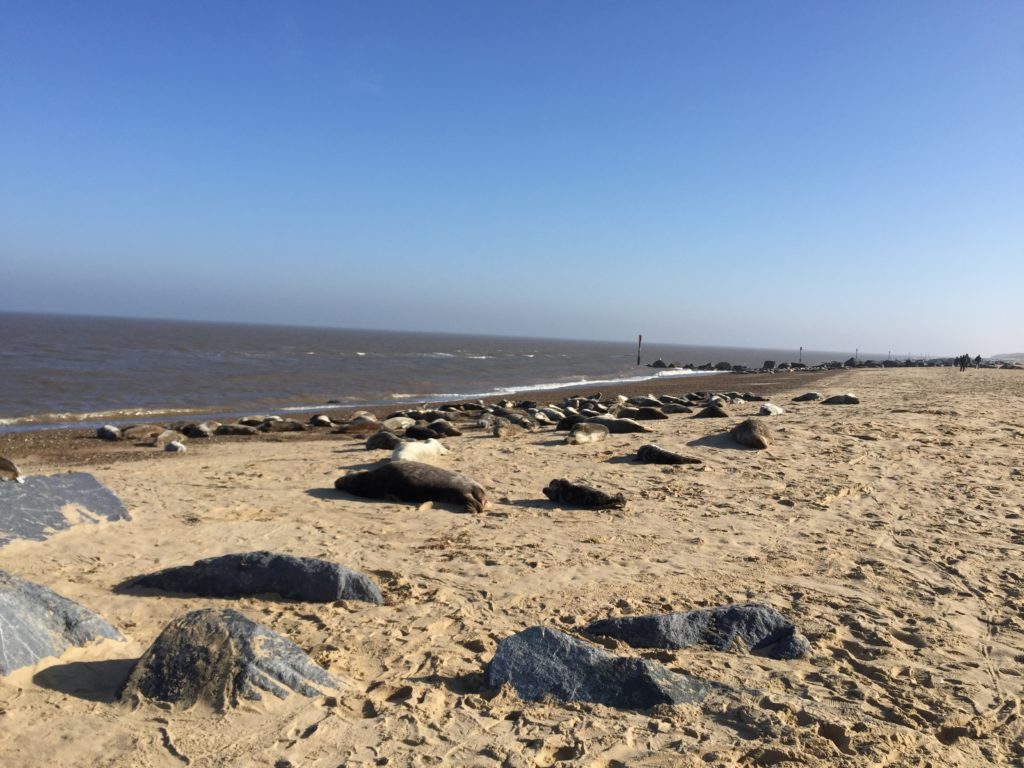 Once again I just about made it before the cafe closed, and sat down for the first time in a long while. 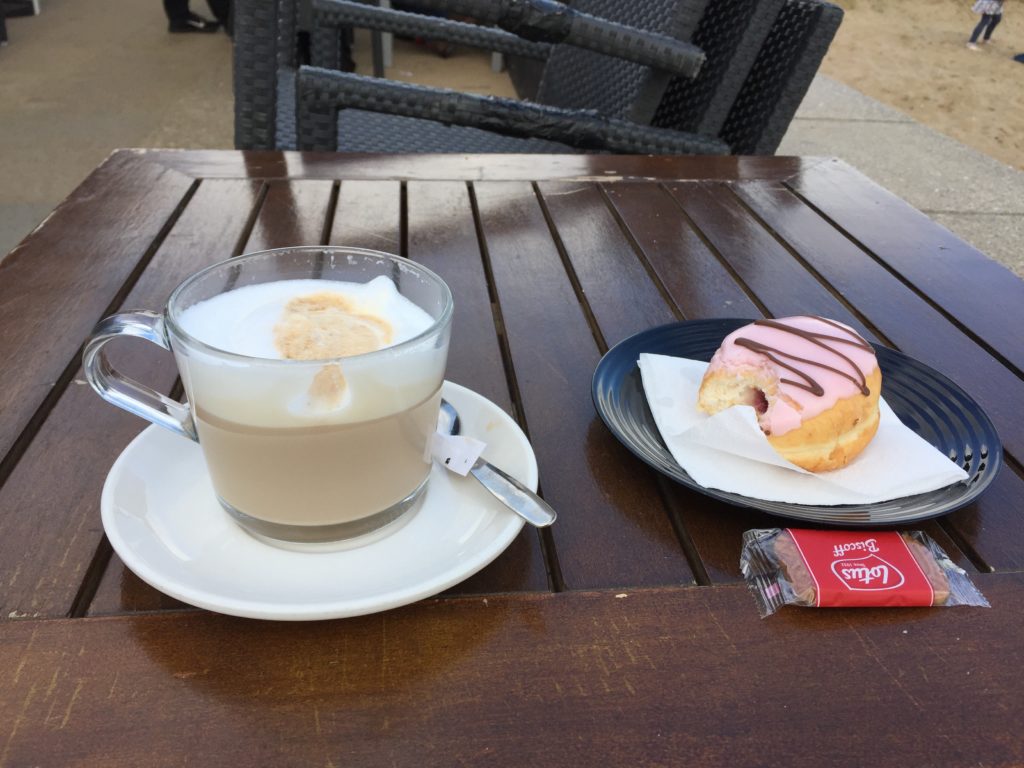 Originally I had wanted to continue from Winterton to Great Yarmouth in order to complete the Norfolk Coast Path, which is another 9 miles. But since I arrived much later than anticipated and was also more exhausted, I decided to cancel the last stretch. This is sad because I have not been able to walk this last bit – which plays a role in Robinson Crusoe – yet, and will not be able to do so in quite a while. Another trip to Winterton is thus on the todo list for 2020.