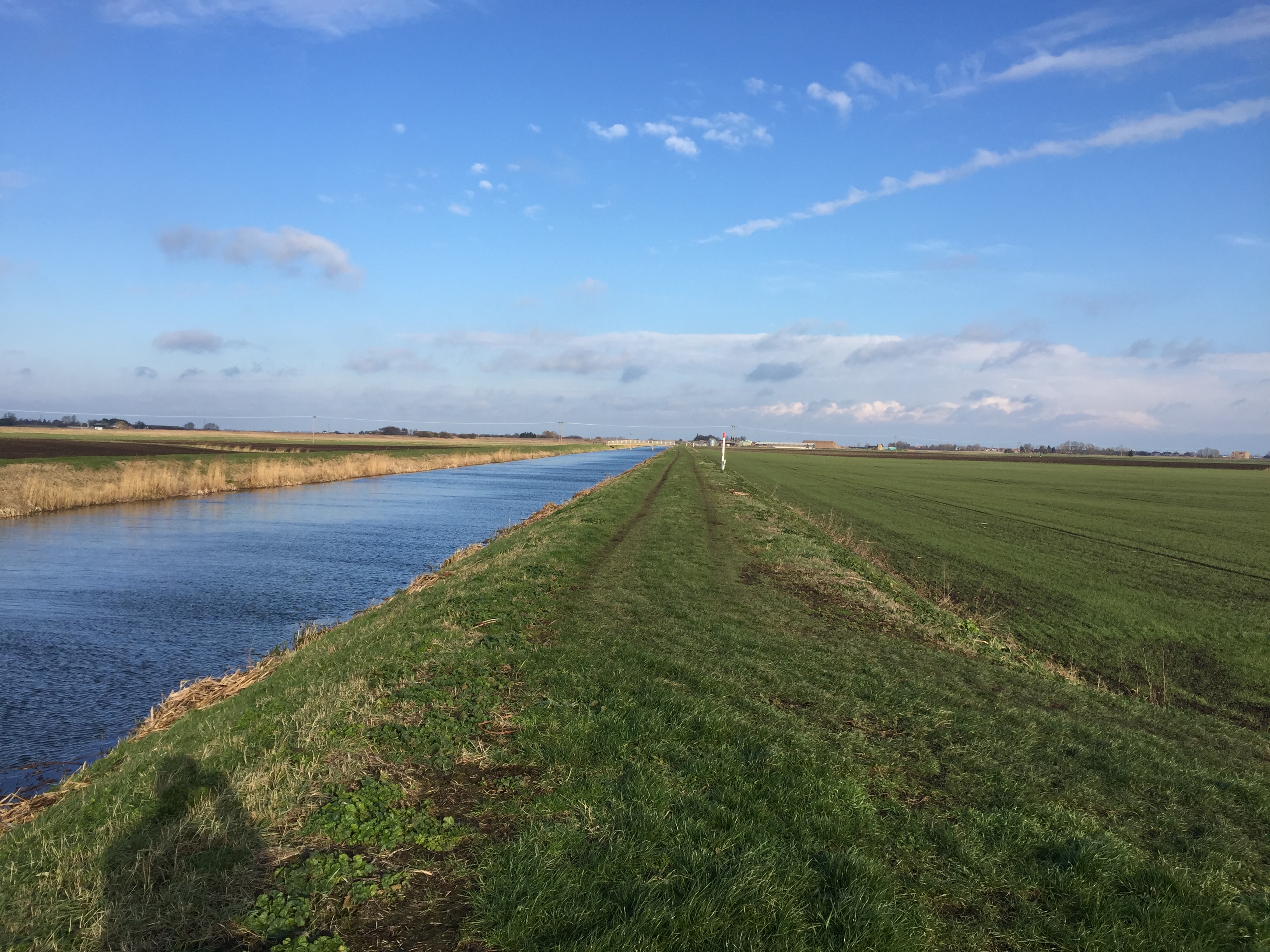 I recently read Graham Swift’s Waterland, said to be the Great Fenland Novel. It is an interesting book, but the story is rather bleak: On just over 300 pages the reader encounters murder, incest, child abduction, an unwanted pregnancy which results in a failed abortion attempt, and several unhappy marriages. After finishing the book I was certainly in the mood for some more lighthearted fiction, but nevertheless I also wanted to go on a walk in the Fens.

I had been on a Fenland walk before: The March March march from March to Cambridge, which was a unique experience but mostly involved road-walking; and that I wanted to avoid this time. I therefore decided to walk from Whittlesea to March on the Hereward Way, which is named after an Ely-based 11th century nobleman who led a rebellion against William the Conqueror. 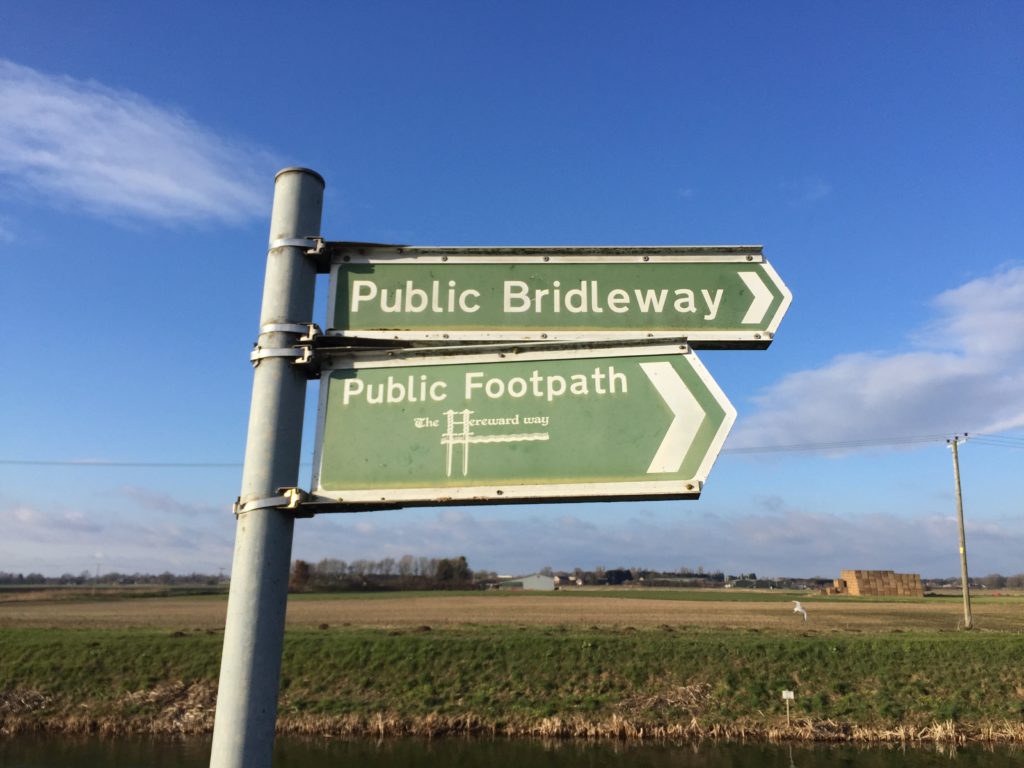 The day was cold but sunny, which is an ideal combination for this area. The first half of the walk consists of footpaths on dykes along various drains, and with no real change in the surrounding landscape this might have been a bit boring, but the sun shining on the ice made the experience pretty enjoyable. 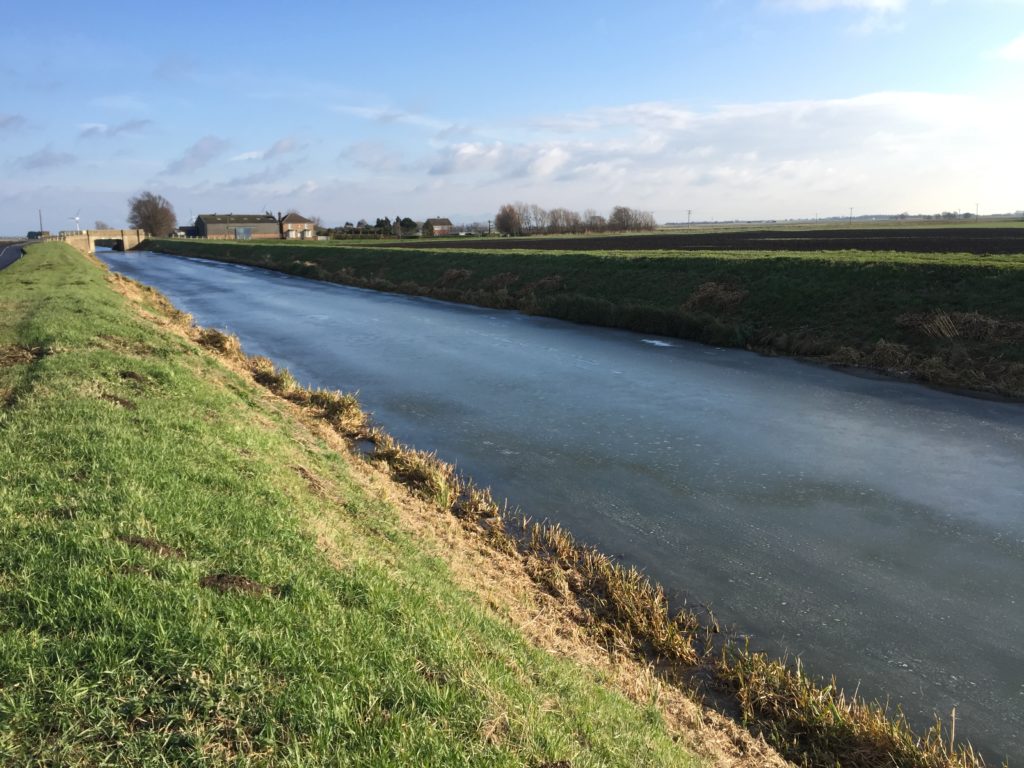 The Fens are a strange place for sure. On the walk I heard the sounds of several dogs barking and howling loudly, but could not see a single dog anywhere – and obviously this was not because a hill obstructed my view. The sounds of the freight trains on their way to and from Felixstowe were also a constant companion, which can be enjoyed at home thanks to some enthusiasts on YouTube.

Unusual things had also happened on the aforementioned walk from March to Cambridge: After taking a picture of a (not very impressive) lake my phone mysteriously crashed and the battery was suddenly completely drained – something that has never happened before or since. Keeping this in mind I brought an external battery this time, which was not needed in the end though. 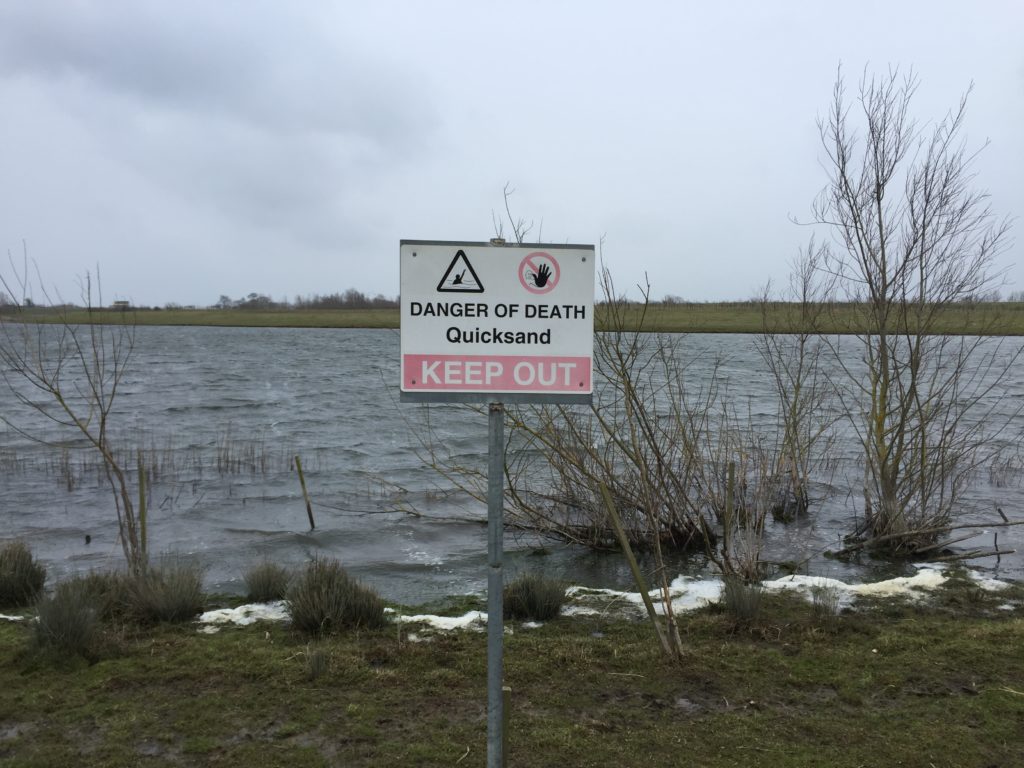 Eventually I reached the remote village of Turves, whose pub is a real-life instance of the Signs of Disrepair trope: 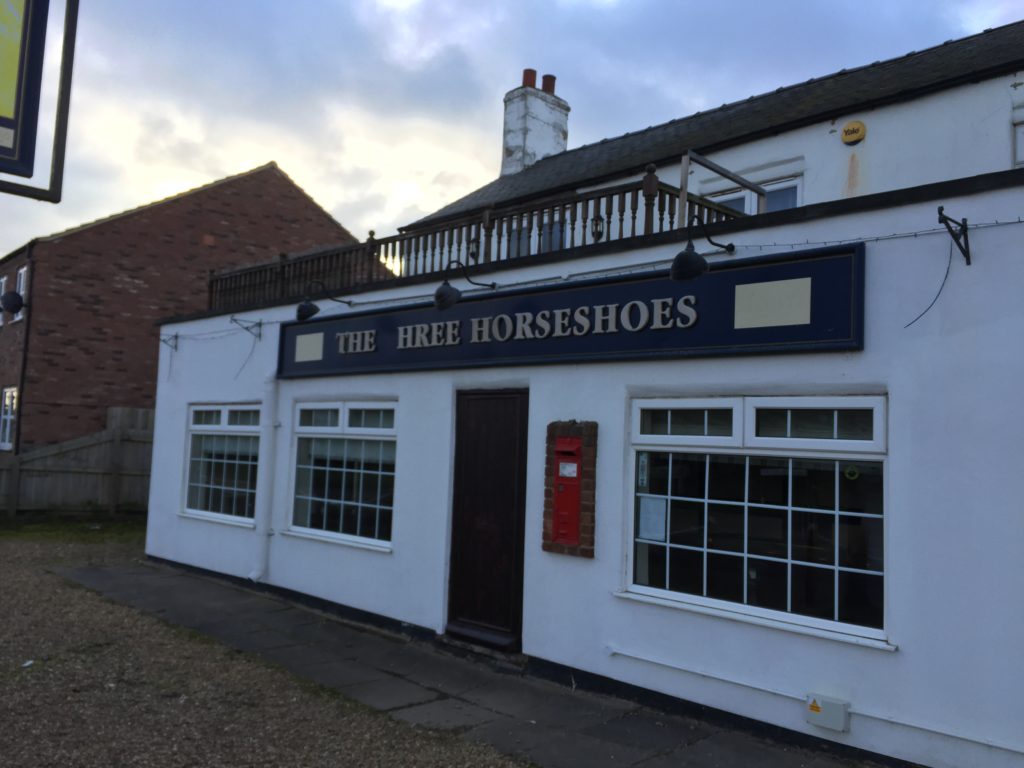 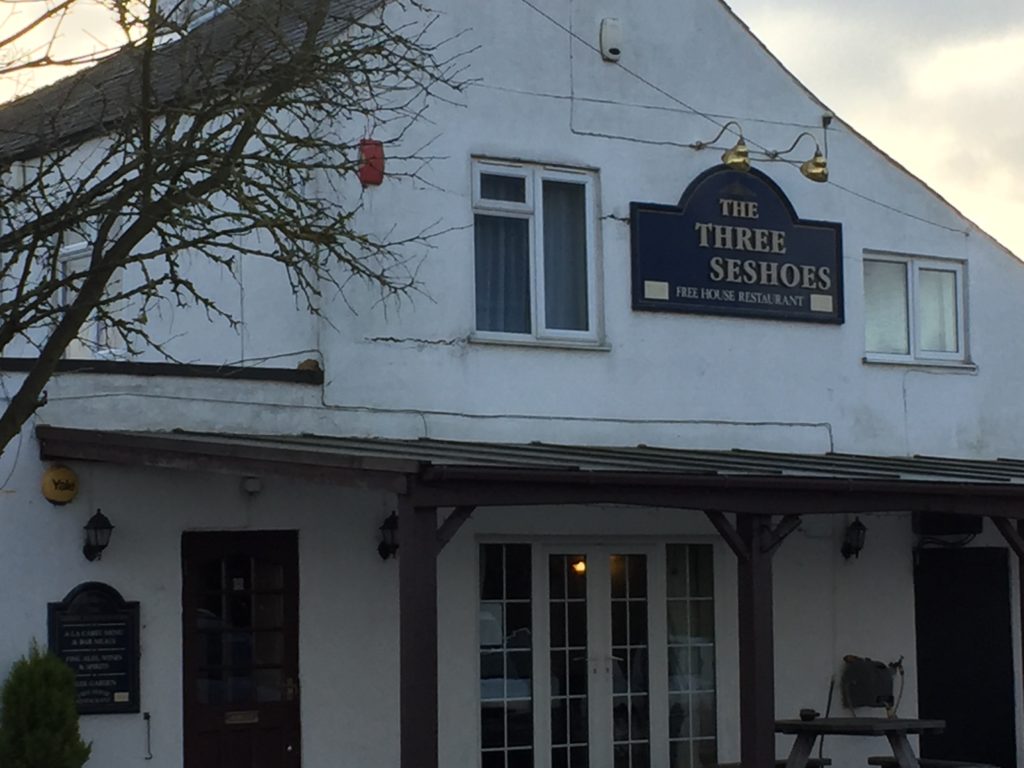 There was also a road sign which said “Park Here and Use Phone at Crossing”, which I was unsure what to make of. I still don’t know what the purpose of these signs is, since googling the phrase merely led to other people asking about their meaning without any conclusive answers. [Update: See Mark’s comment for an explanation.]

The character of the walk changed after passing Turves, and the at times very muddy footpath leads one through fields and farmland. Probably the most memorable moment of the day was encountering this creepy plastic tree shortly before leaving the village behind: 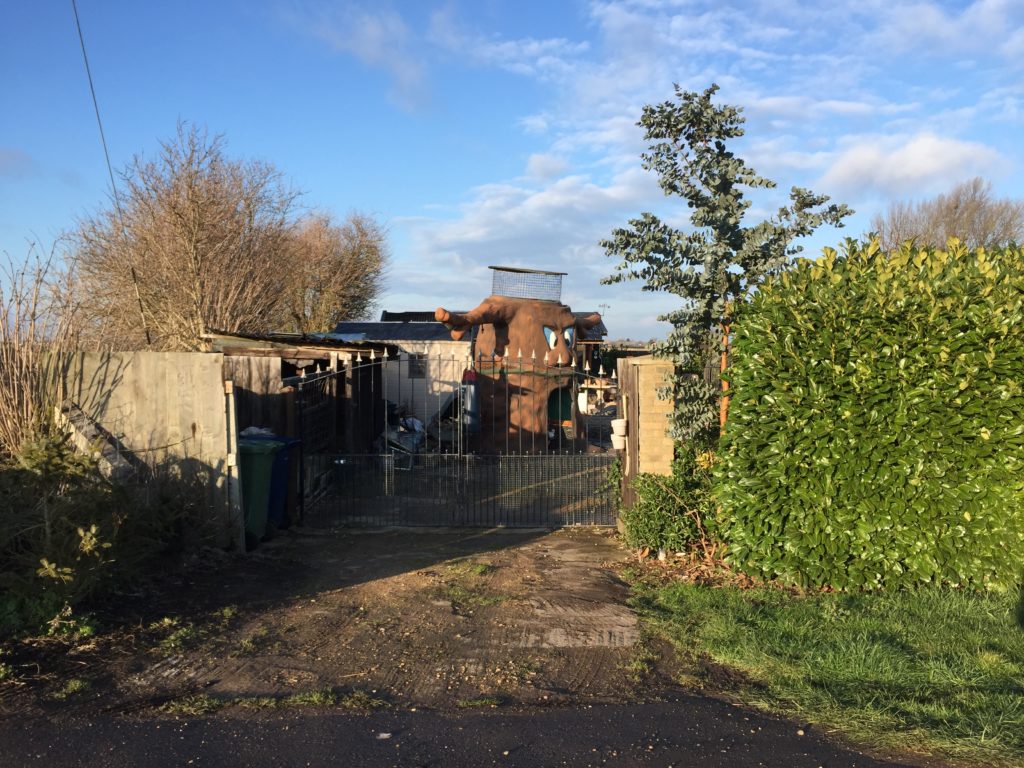 Eventually I reached the River Nene, where the Hereward Way continues along the bank until March. The footpath here leads directly through some people’s back gardens, from where I spotted two swans sitting between the ice: 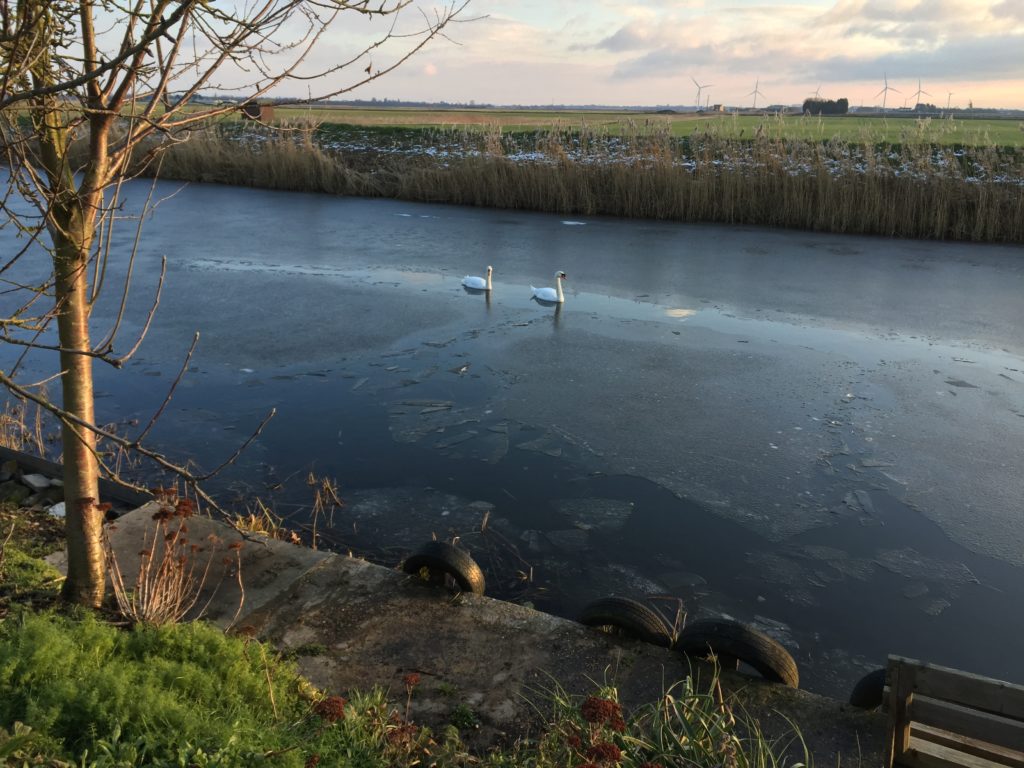 Annoyingly a very short stretch along the river – just the area between the two gates – is privately owned, which necessitates a detour via a nearby road. 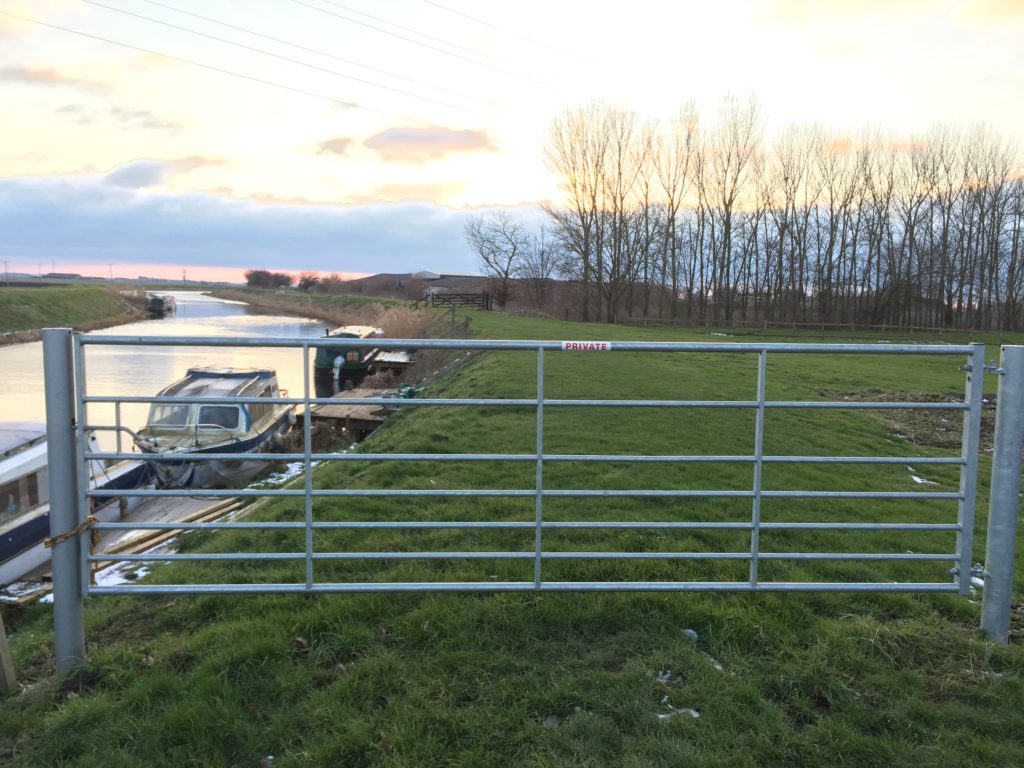 As far as I could see this was not signposted, so the map I had bought for the walk was a worthwhile investment.

I approached the town of March from the west and walked past some very nice houses – I think the Fens would really benefit from more pink: 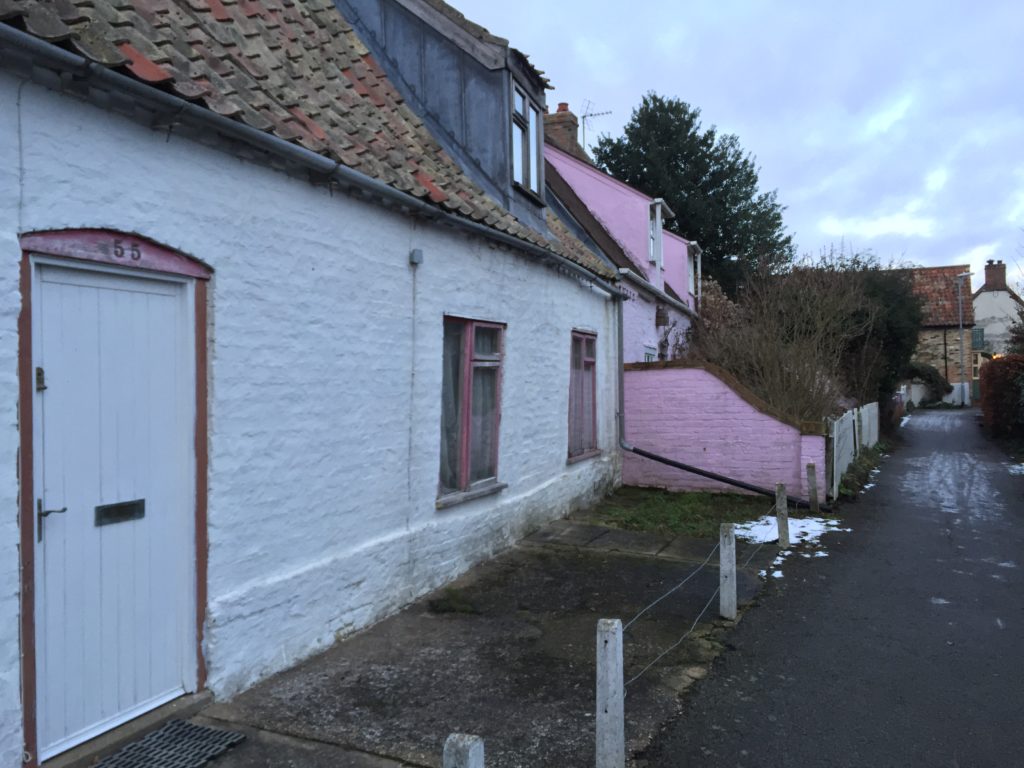 Overall the walk was much less bleak than the novel – but the weather helped, and I would only recommend it for those who truly have a taste for desert landscapes. There are other parts of the Fens I still want to see, but probably not all that soon.