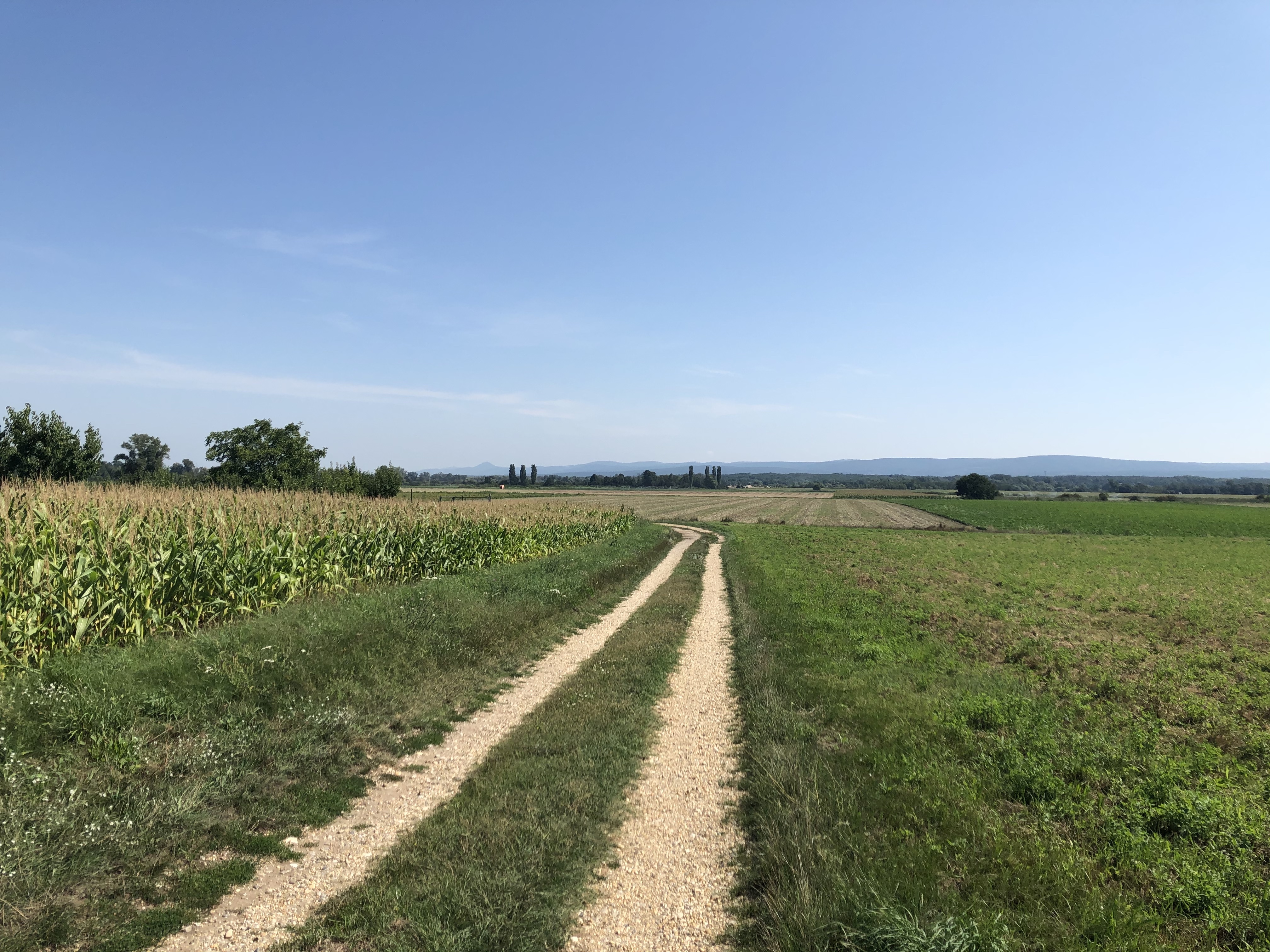 For the last few months I have been living in Vienna, which is my first extended stay in Austria. The first line of the country’s national anthem is “land of mountains”, and I have indeed gone for several walks in areas with, at least for me, impressive levels of elevation. It certainly has its own appeal, and I might actually miss mountains when I move back to flatter parts of the world. But of course I also wanted to investigate the flat parts of Austria itself.

As usual I did some thorough research on Vienna before moving there, which chiefly consisted in watching Austrian movies and tv shows. One of those movies immediately became one of my all-time favourites, and I have re-watched it several times: Indien with Josef Hader and Alfred Dorfer. It revolves around two employees of the federal state of Lower Austria, whose job it is to inspect hotels and restaurants around the state. In this role they check whether, as regulations demand, the Wiener Schnitzel is actually made of veal, and investigate the consistency of the bread rolls as well as the water pressure of the showers.

The two protagonists – Mr. Bösel and Mr. Fellner – have very different personalities, to say the least. Bösel drives recklessly while drinking beer, throwing the empty cans out of the window or into the back of the car. Fellner fancies himself an intellectual, carrying around Trivial Pursuit cards and theorising about the relationship between geography and local cuisine. The popularity of cakes and pastries in Austria, for instance, is allegedly explained by the mountainous landscape. 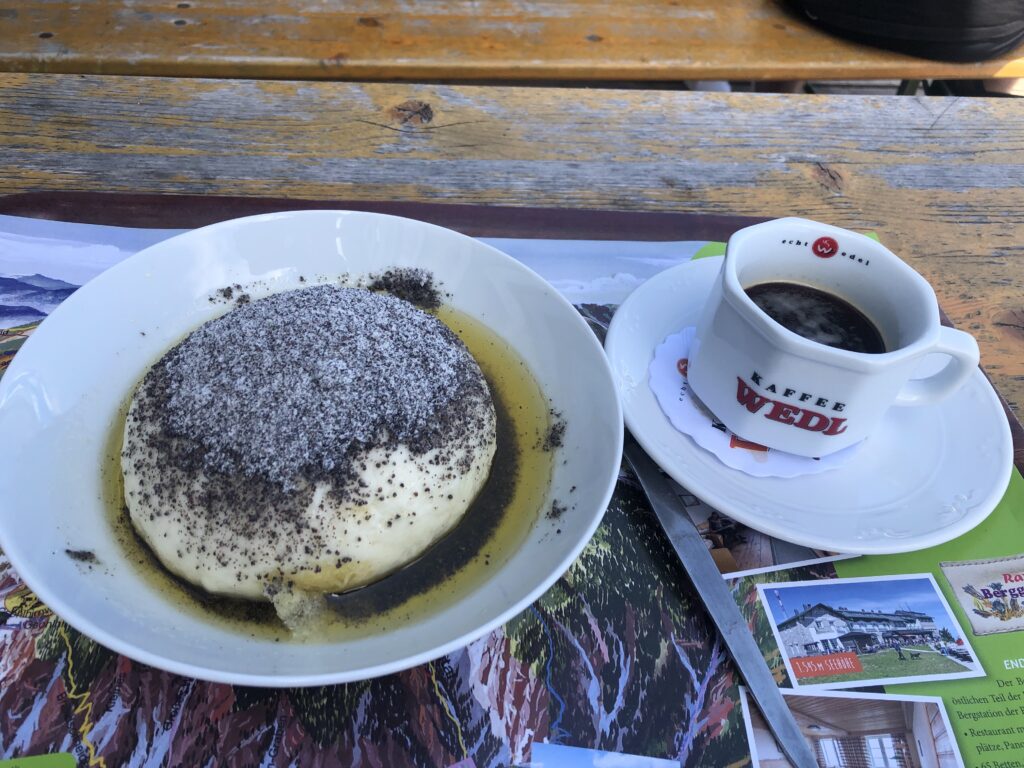 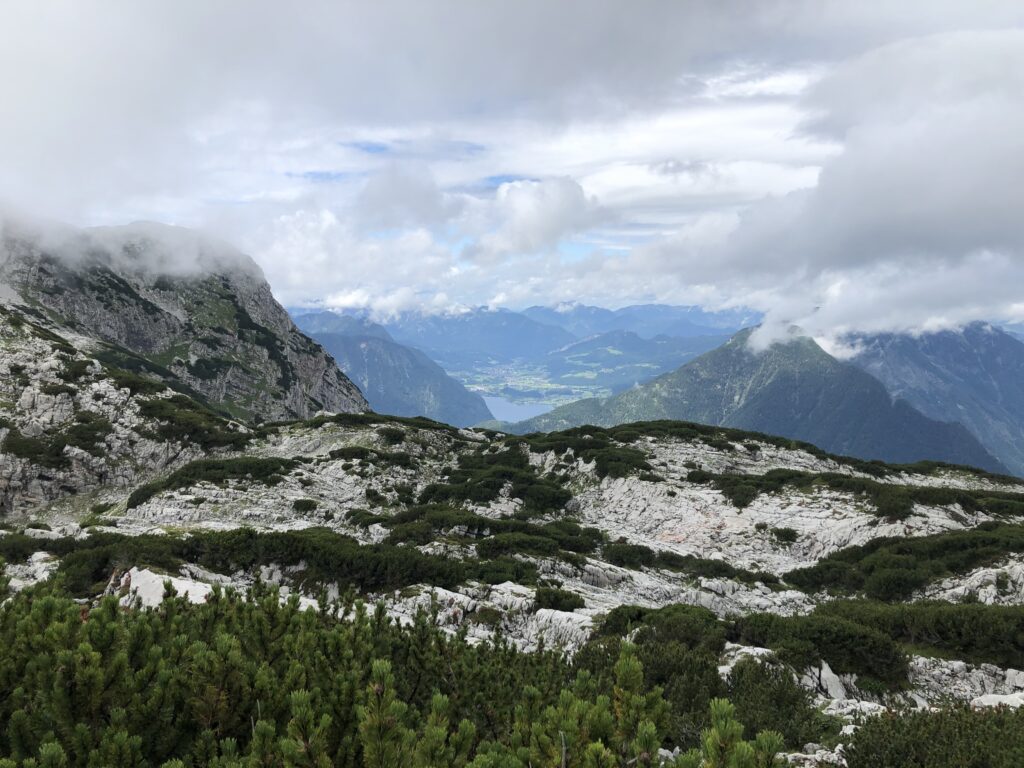 Unsurprisingly spending days together on the road quickly leads to conflicts between Fellner and Bösel, to great comedic effect. In the end an unlikely but touching friendship emerges though, and the film then takes a sad turn I will stay silent about here. (There’s a DVD which apparently has English subtitles, and in German it is available to stream).

Through Indien I found what is, in effect, the East Anglia of Austria. One scene has the protagonists driving through a completely flat landscape composed of muddy fields and long straight roads, with the occasional railway line cutting through. There were even oil pumps, like in Texas. Where could this be? By freezing the frame and zooming in on the road signs it became clear that they were in the Marchfeld, an area to the northeast of Vienna dominated by agriculture. 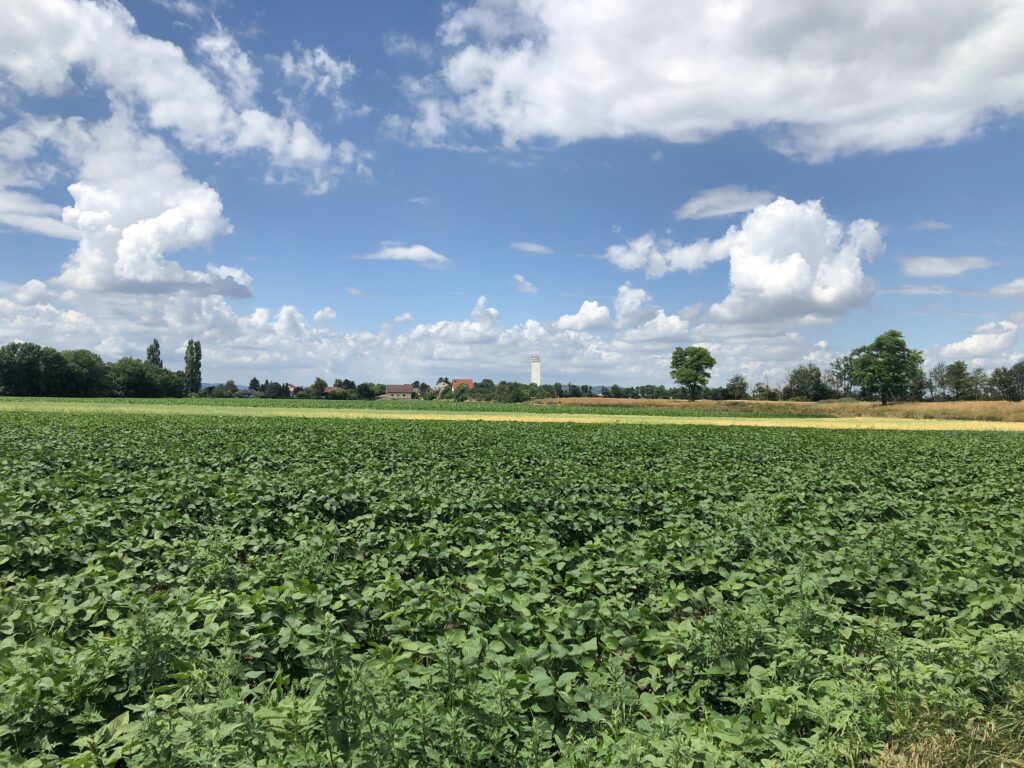 Of course I now wanted to find out as much as possible about the Marchfeld region, but there seemed little to go on initially. Eventually I came across a novel set in the area though, which in my experience is always an excellent resource: Matthias Mander’s Wüstungen (Deserted Villages) from 1985. The book was long out of print, so I went to an antiquarian bookshop in Vienna to get a copy. The bookseller was curious to learn more about the author of the book, since apparently his novels sell quite well even though he is not a household name. I said that I didn’t really know any details either, since my interest in the book was for geographical reasons. It seemed unlikely to both of us that the other buyers share my passion for flat landscapes.

My expectations about the literary quality of the book were modest, since I feared that it would be a bit dated. But I was positively surprised. It is certainly no equivalent of Waterland, the Great Fenland Novel discussed on an earlier occasion, but I enjoyed reading it nevertheless. The plot is roughly as follows: the protagonist Zwigott is frustrated with his high-profile industry job in Vienna, and quits in order to work as a school teacher in the Marchfeld town of Gänserndorf. His life gets entangled with that of other inhabitants, such as the troubled bank director Siegl, who is trapped in an unhappy marriage and finds a tragic end. He also develops an interest in the history of the Marchfeld. Towards the end of the book he goes on a long, lonely walk to look for an abandoned village, even though it is an unusually hot summer. This walk leads to “character-forming insights”, so the chronological summary at the beginning of the book, and in the end Zwigott returns to his industry job.

Some aspects of the novel felt a bit gimmicky, such as that the teachers are using a computer to write something like an interactive history of the Marchfeld – although in some sense putting hypertext in a book from 1985 is of course quite original. But I did enjoy the detailed descriptions of travelling on commuter trains, and learned various interesting facts, such as that Ernst Mach grew up in the Marchfeld, or that the construction of the now existing canal through the Marchfeld was a controversial issue at the time. And the following remark, translated somewhat freely, certainly resonated with me:

The oppressive absence of the sea! We’re in the middle of a scorching hot continent, with a few shallow ponds as our only relief.

For while I like Austria’s mountains, I do not enjoy it’s lack of ocean access. All the land surrounding me does sometimes feel oppressive. But luckily the lakes and rivers are much more than mere ponds. 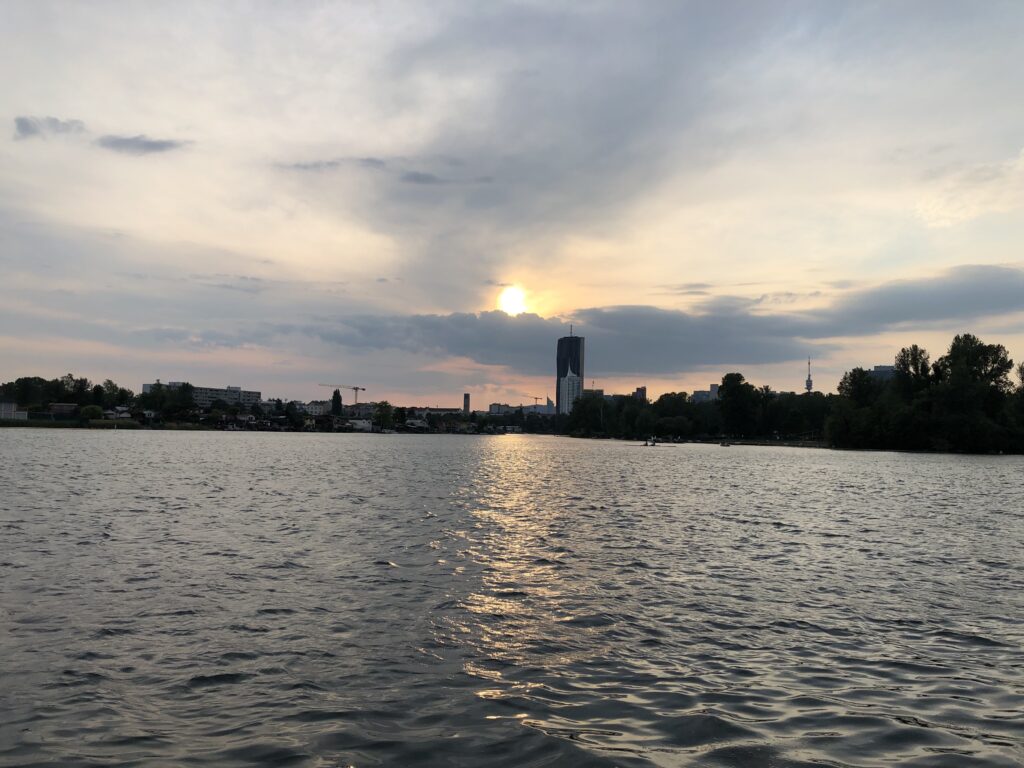 After all the cultural input I obviously wanted to experience the Marchfeld in real life. Unsurprisingly there were not many descriptions of walks in this area available online, as people usually head out of Vienna because they find it too flat already. But I found a promising route on, of all places, a mountaineering forum. I was a bit unlucky during this walk though. For one thing, I really wanted to take the most direct route to Marchegg, the starting point, since it features Austria’s longest stretch of completely straight railway tracks (~30 km). When I read about this I was reminded of the railway to Great Yarmouth parallel to the Acle Straight, only that at the end there is Slovakia rather than the sea. But it was not to be, as there are constructions works on the line all summer. 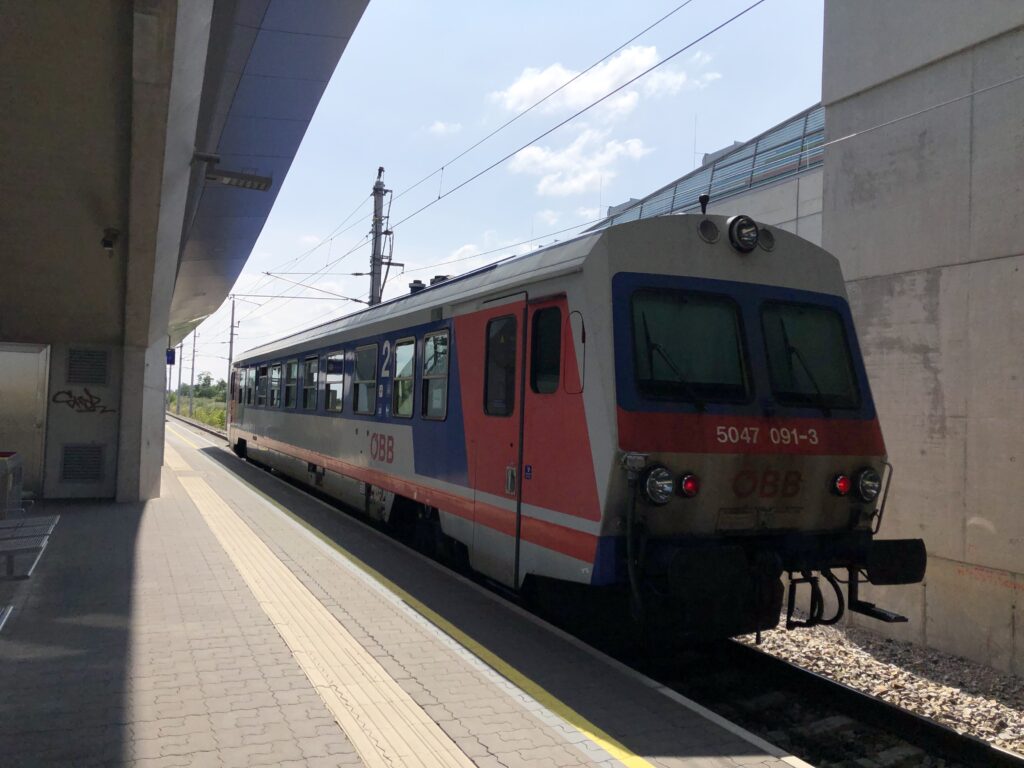 I made it to the starting point anyway, on a day that was definitely as hot as that on which Wüstungen’s hero Zwigott gained his life-changing insights. This would have been fine, as I was well equipped with a hat and lots of water. But part of the walk also lead to a jungle-like area with thick vegetation and lots of water, the perfect terrain for aggressive midges. The intended route right through the middle of this jungle was closed due to some unspecified “imminent danger”, which was maybe for the best. The alternative route around was less scenic, but also had fewer mosquitos. 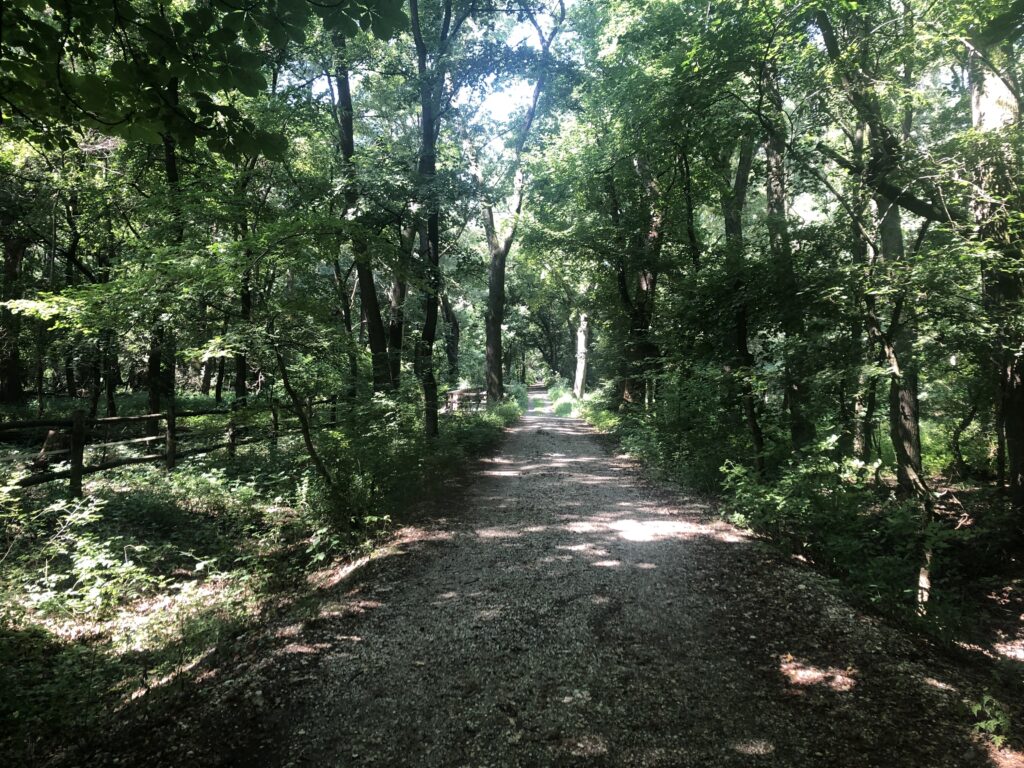 Despite these setbacks and the heat I was happy with the walk. At the endpoint in Angern there was an inviting bench in the shade right at the river March. I sat down to recover, drink water, and watch a ferry operating between the Austrian and the Slovakian sides of the river. 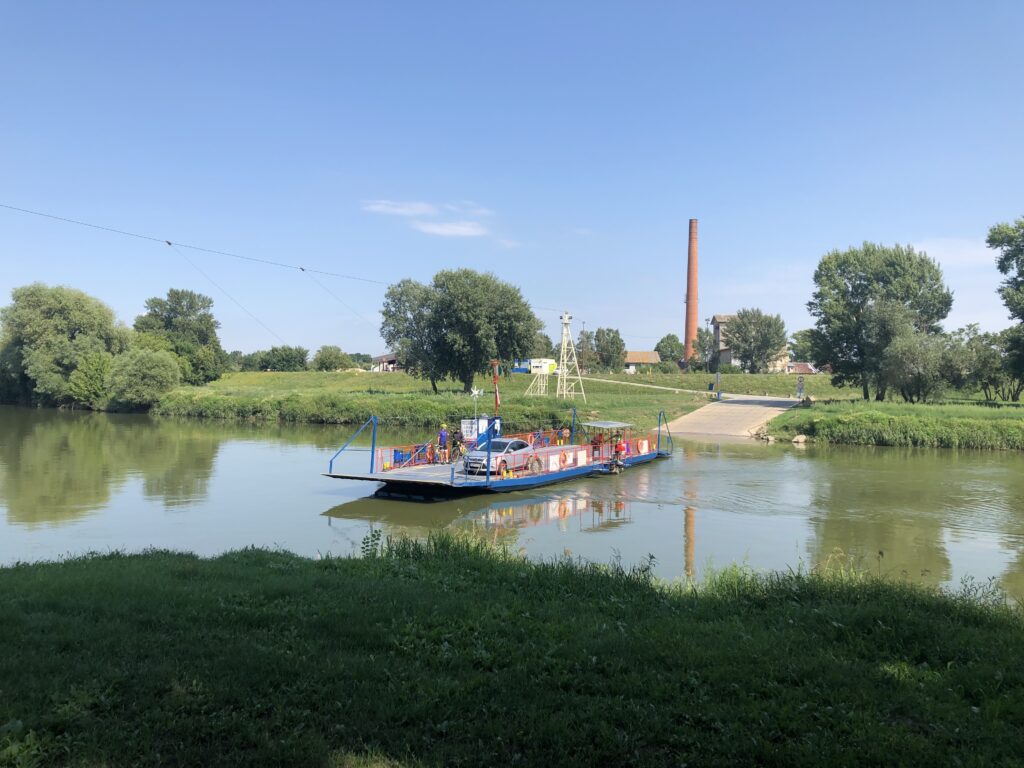 The border between Austria and Slovakia along the March is 91km long. Until 1989 this was also the border between the Western and Eastern blocs, which explains why there are very few bridges over the river: three in total, and just a single one for cars, in the very north. There were plans to build a new road bridge in Angern, replacing the leisurely car ferry, but in 2014 a large majority of the population voted against the proposal. Not because of a general dislike of bridges, apparently, but out of a fear that too much traffic through the centre of town would result. Plans are now being drawn up for a bridge in a different, less central location, which might be built in a couple of years.