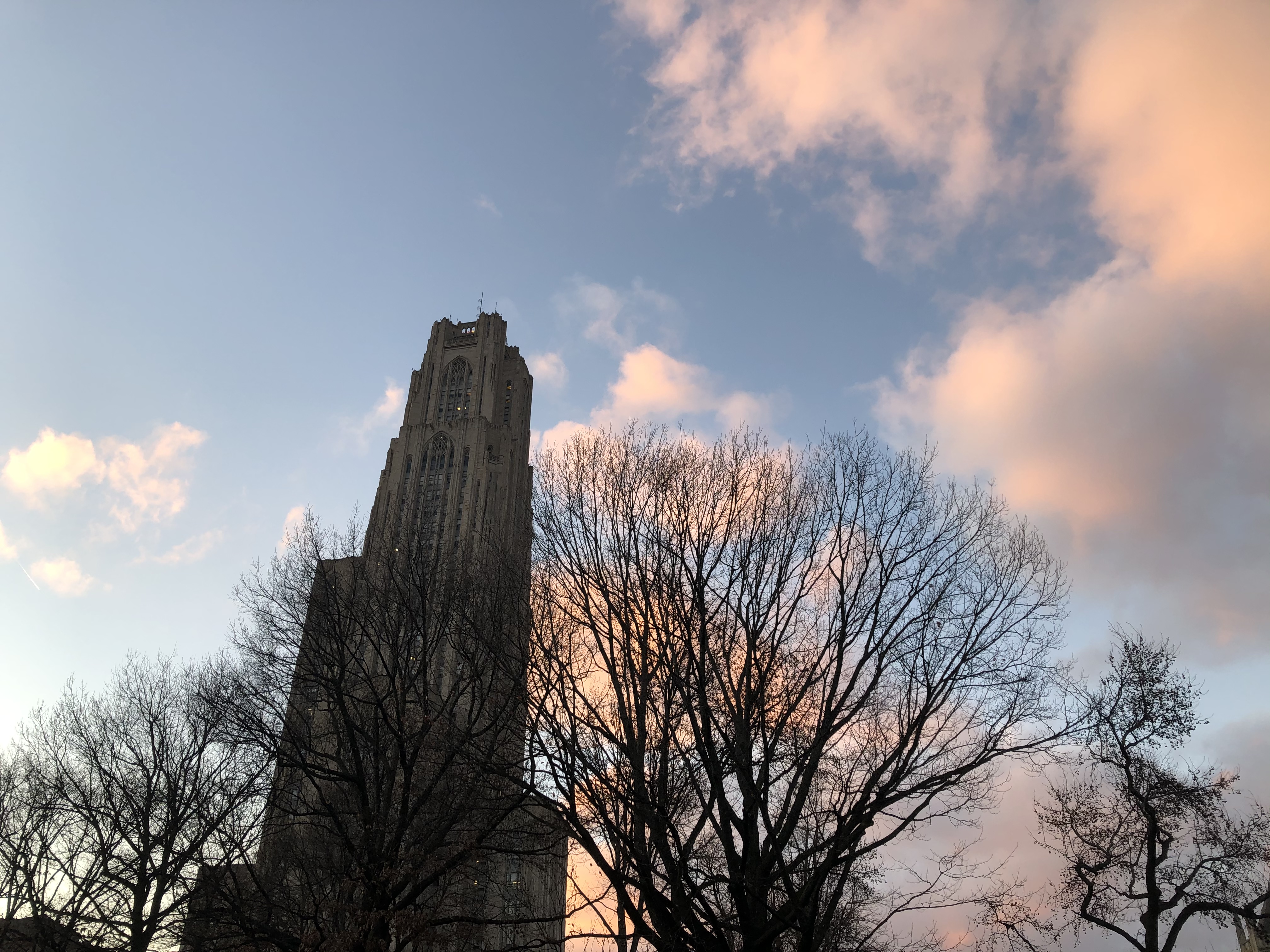 On the first day of 2020 I got up early in order to catch a flight to the US, where I had never been before. I was to live in Pittsburgh, Pennsylvania for a couple of months in order to do some research (the visit ended a bit earlier than planned though due to current events). This was an exciting way to start the new year, and I was was very curious about how living in Pittsburgh – a hilly post-industrial city – would compare to Cambridge – a flat medieval university town.

I had not lived in a city with hills since leaving my hometown in Germany, and was quite intrigued by the frequent changes in elevation. I randomly walked down a road near to where I was staying, which suddenly became quite steep and provided a nice view of the neighbourhood: 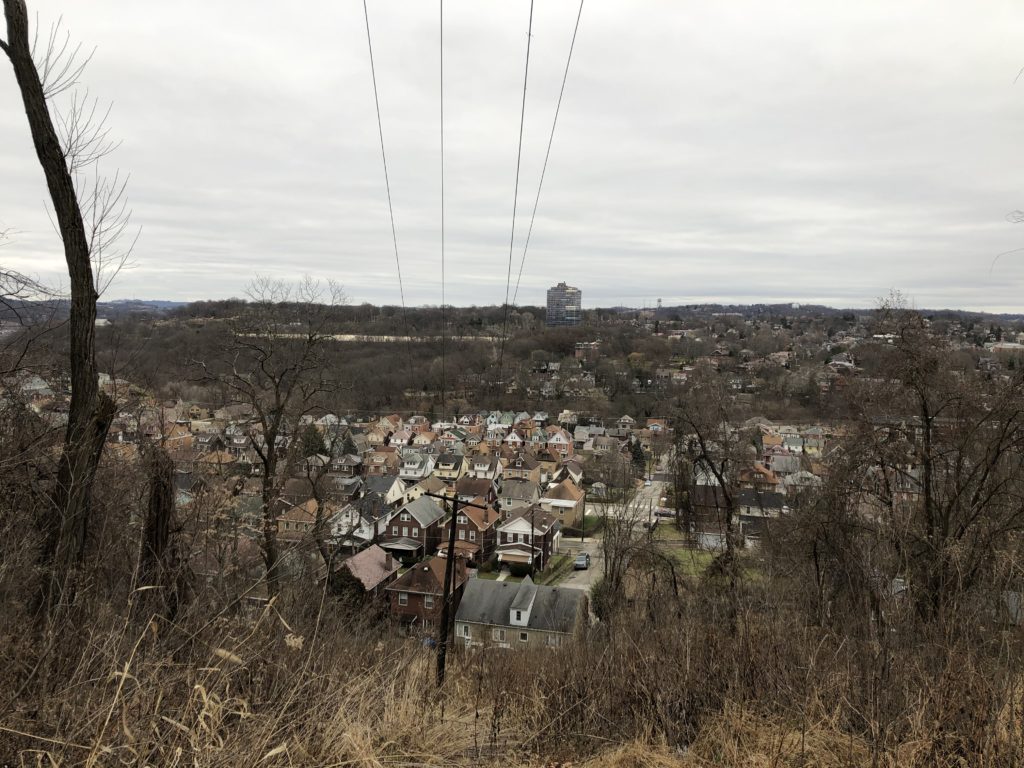 Unfortunately this very road – which also went downhill again towards the other end – also connected me to the nearest supermarket. Since I did not want to make a habit of walking up and down a hill on a regular basis I thus ended up using the second-nearest supermarket instead, which was a much flatter walk.

Of course I had read and heard many times that public transport in the US, with a few exceptions, is much less developed than in Europe. Luckily the buses in Pittsburgh were frequent and reliable, so I had no trouble getting to places within the city. Going out to the countryside was a different matter though: apart from very infrequent commuter buses there was hardly a way to leave Pittsburgh without a car, unless one wanted to go to another city rather than rural areas. I nevertheless managed to go on a number of interesting excursions, some of which I will describe here.

The city itself has a number of scenic spots. The standard place to go for a view of the downtown is Mount Washington. I follow a couple of Pittsburgh-based accounts on Instagram and get to see photos taken from this perspective on a very regular basis: 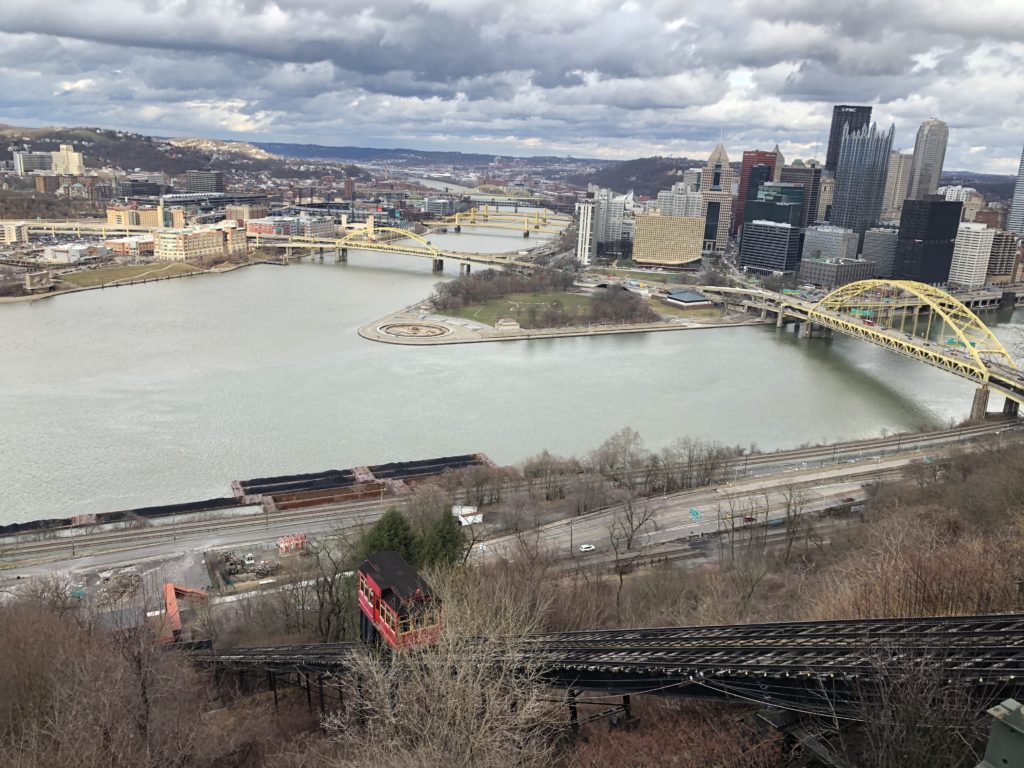 The red vehicle is one of the two inclines which run up and down Mount Washington, and they are a highlight for all fans of transportation. Furthermore there are also some large parks within the city. Here’s for instance Schenley Park as seen from the Cathedral of Learning (the building in the header): 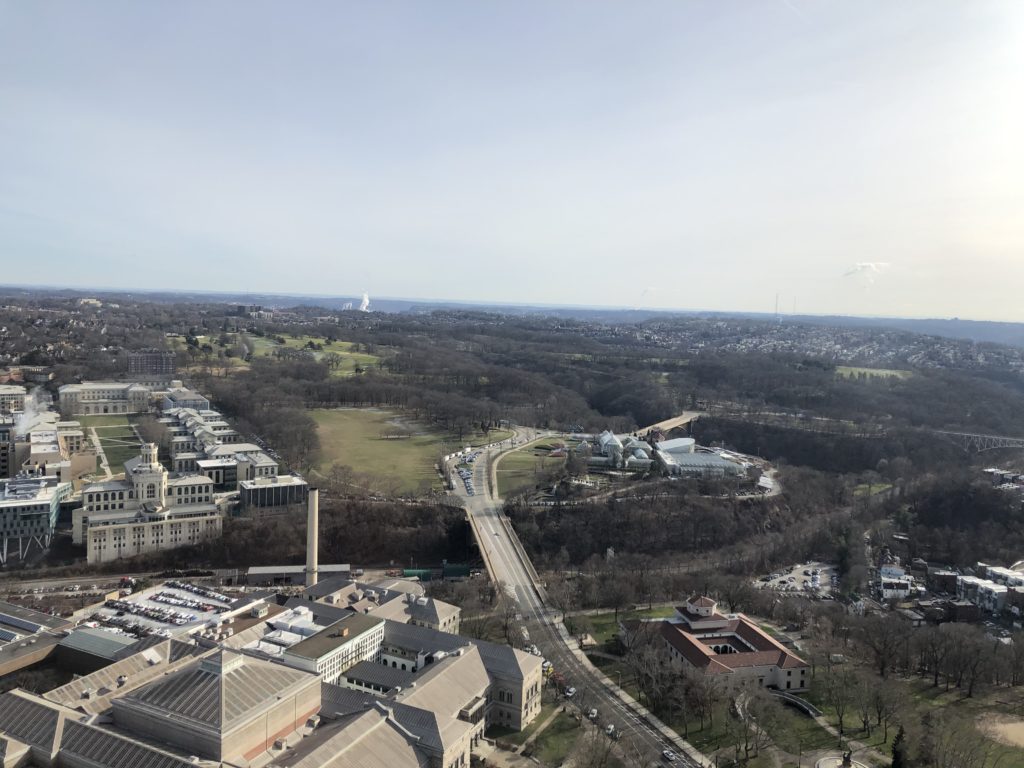 I find it helpful to leave the place where I’m living from time to time, however, and hence started to look into the feasibility of day trips. Luckily I found two hiking and cycling trails on the outskirts of Pittsburgh, parts of which were accessible by bus: the Steel Valley Trail and the Montour Trail. I decided to try the former first, starting the walk in Homestead, a former steel town immediately south of Pittsburgh which is famous for a strike that ended brutally.

The day I had chosen was not exactly ideal, for it ended up being the coldest of my whole stay. Hat, scarf, and gloves would have been convenient but I did not own any. I struggled to eat my sandwich since my fingers got too cold while holding it, and towards the end of the walk the water in my bottles was nearly completely frozen.

Until the 1980s the Pittsburgh area was dominated by the steel industry, and the local steel mill was often the main employer of the towns among the Monongahela river,  whose route I was following. The deindustrialisation of recent decades has left many of these river towns in poor economic shape, and it seems that life there is rough. On Google Maps I read reviews of apartment complexes in the town of McKeesport, for instance, and one reviewer (who gave three out of five stars) wrote that over the years there had been 15 murders in their apartment complex.

There is still one working steel mill in the vicinity, however, namely the Edgar Thomson Steel Works in Braddock. For various reasons Braddock has received a lot of attention in recent years, and I can recommend this short documentary with much better visuals than my wintry photos deliver. 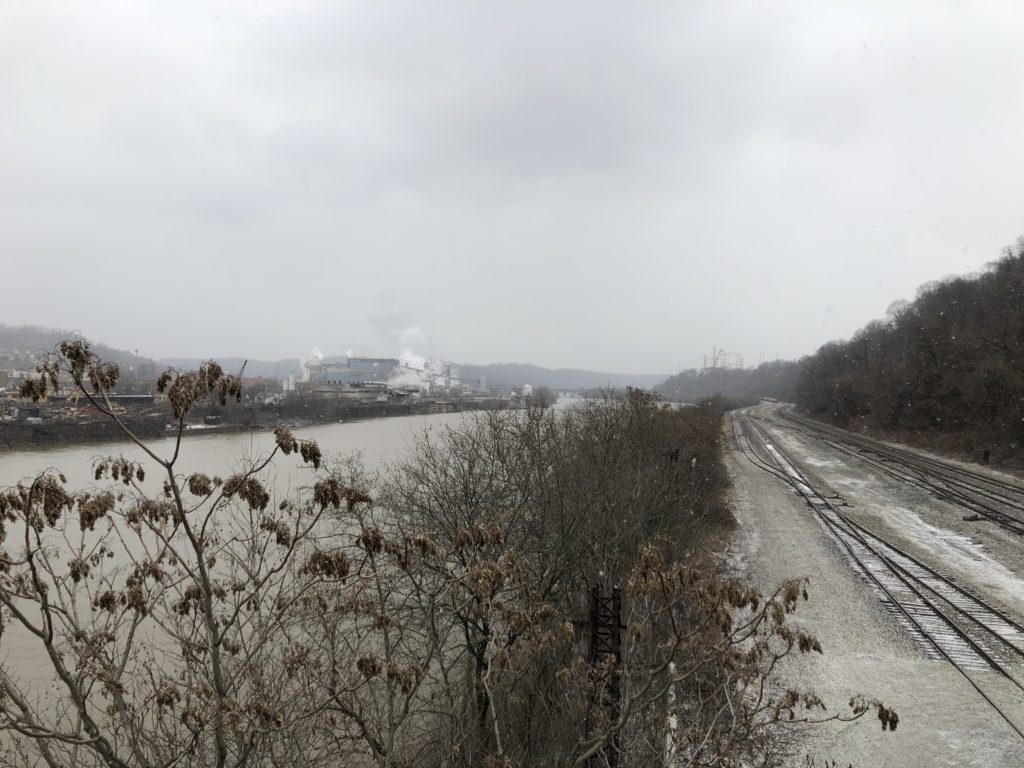 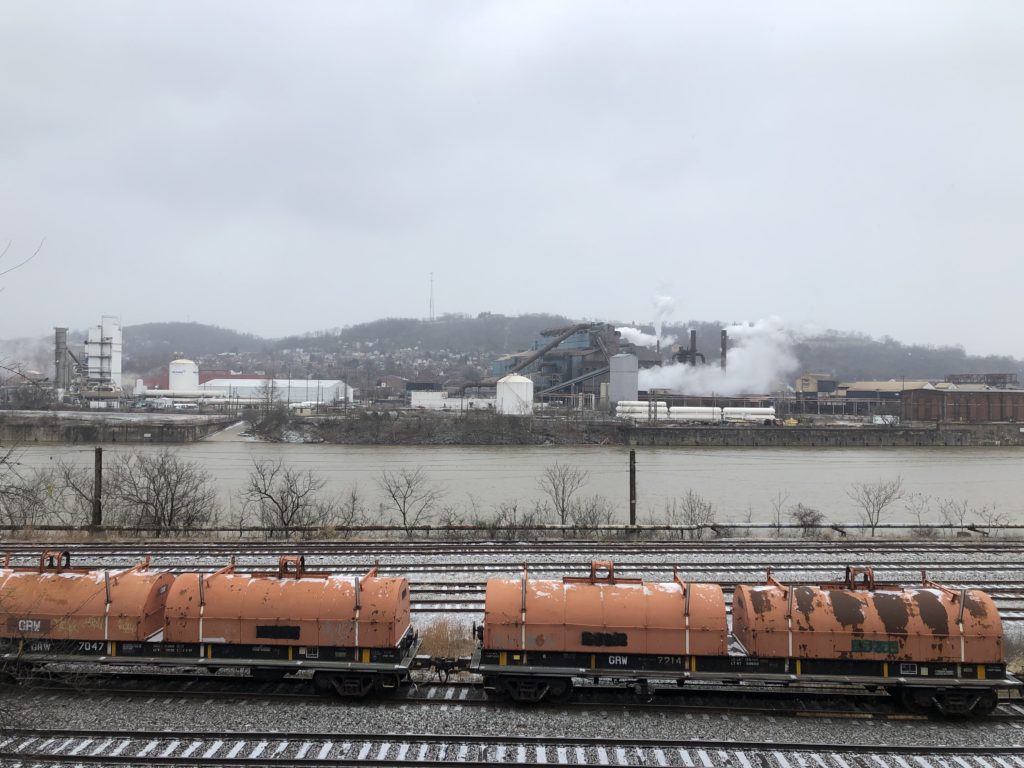 While the steel works are hard to miss, there is another Pittsburgh attraction on the opposite side of which from my position one could see very little: the Kennywood amusement park. Non-Pittsburghers might know it from the film Adventureland, which even has a scene where the protagonists look down onto the glowing steelworks at night. 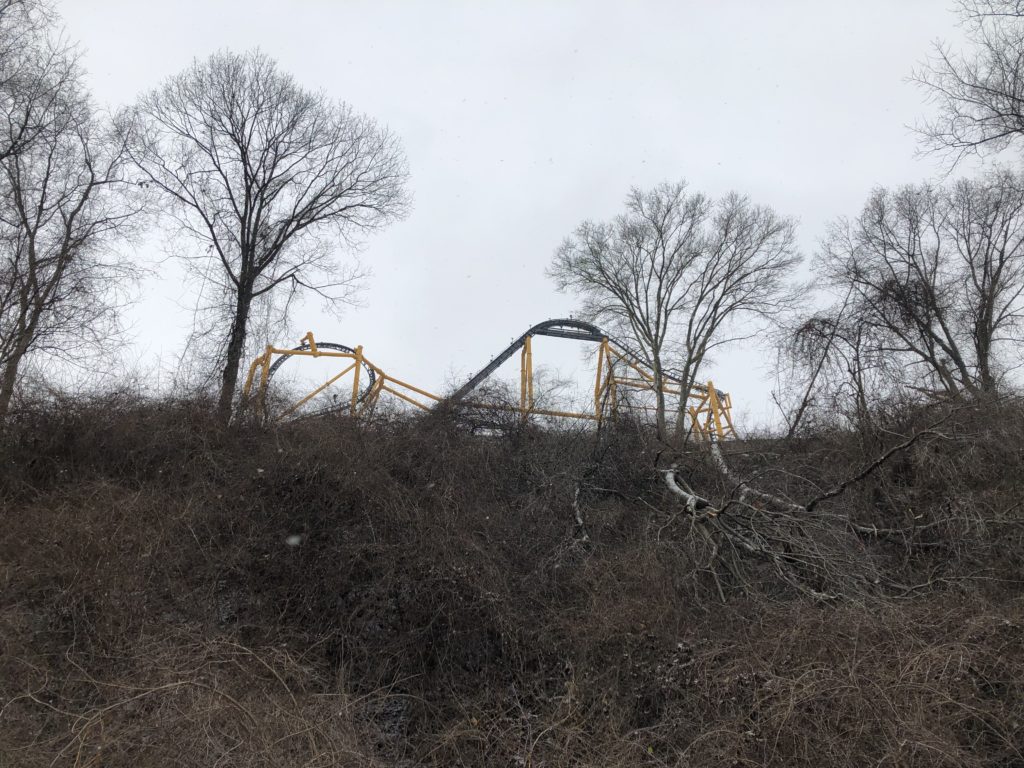 Despite the freezing cold my first expedition was completed successfully, and after warming up I was ready for more. I decided to do a walk along the Montour Trail starting in Clairton, for which I had to take a bus nearly to the end of the line. This felt slightly strange since I was pretty much the only passenger going this far, and the streets outside were deserted. I was thus reminded of the scene from the Simpsons in which Lisa takes the 22A instead of the 22.

Clairton is home to a coke plant which emits a lot of steam, unfortunately I couldn’t adequately capture this since it was a grey and cloudy day. 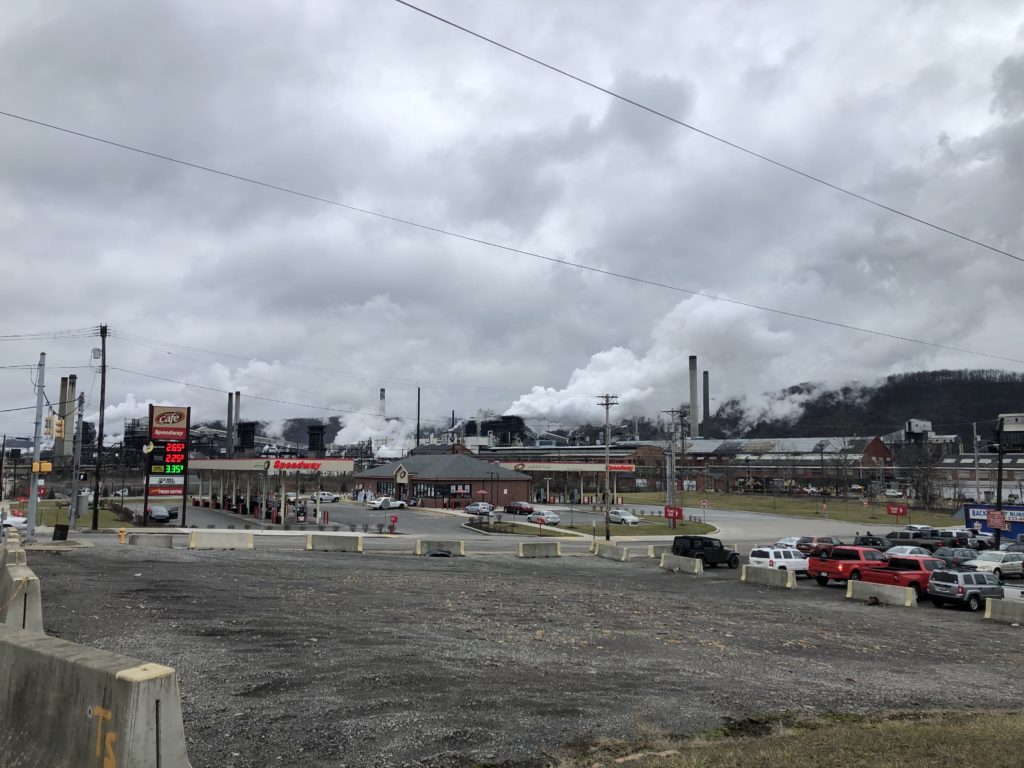 Fortunately it was not as cold as the last time. Along the way I found a place where school buses spend their weekend: 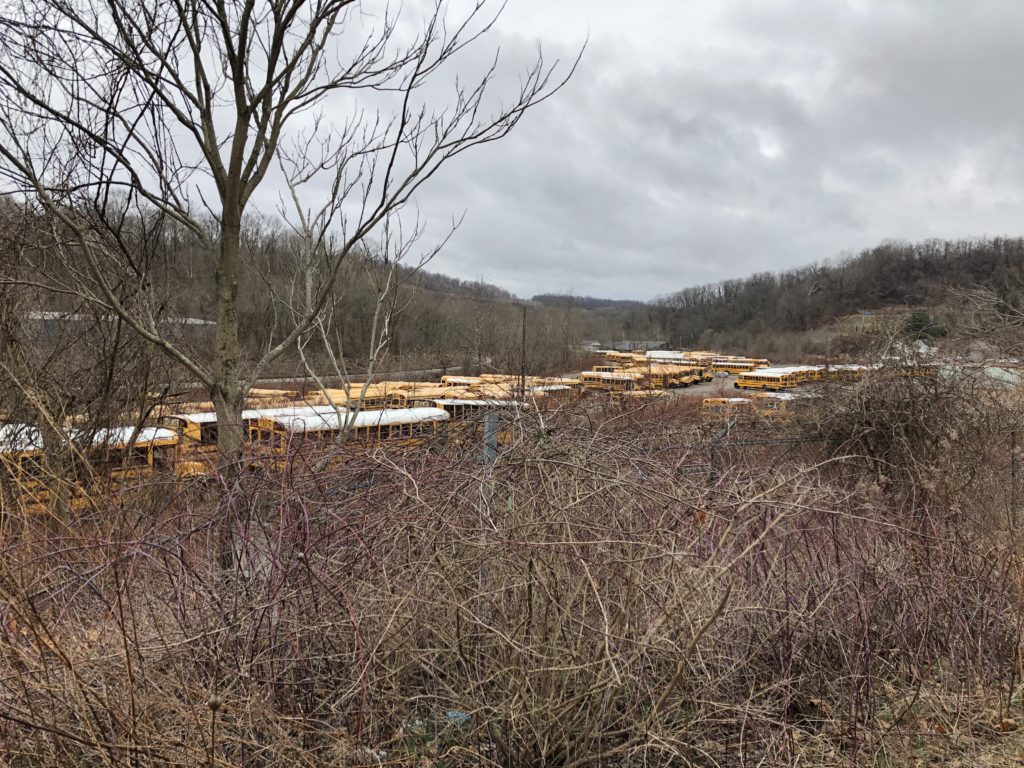 At times this walk gave me an eerie feeling, for instance when passing a remote house with a skull in the window. 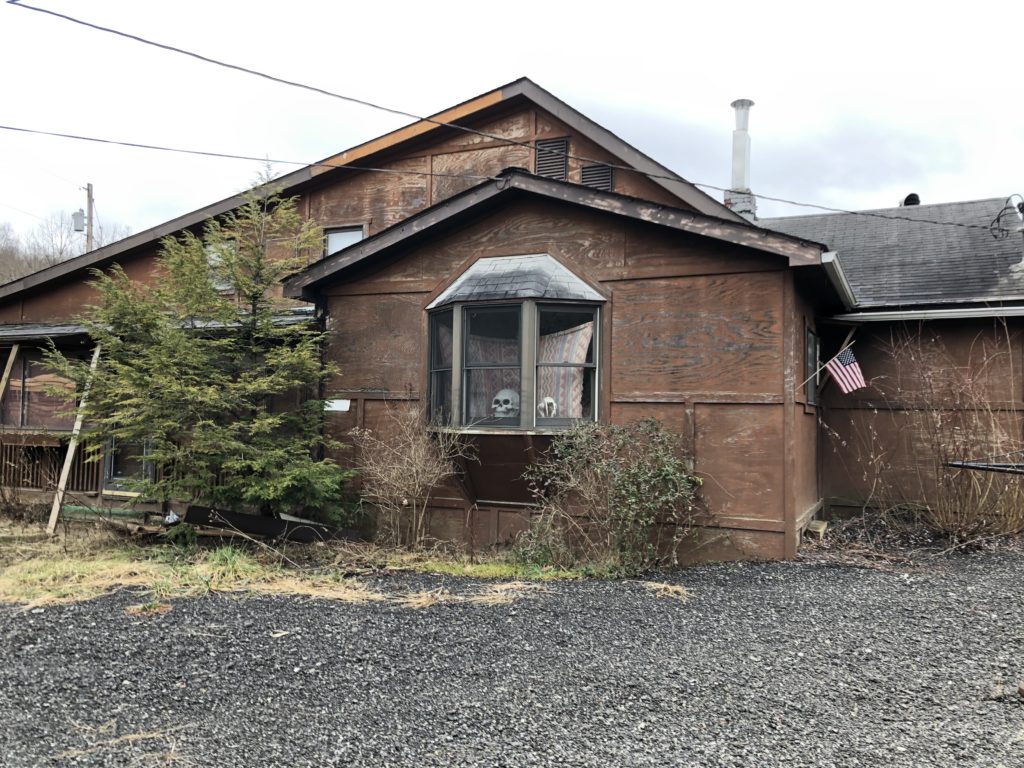 Thankfully I only later learned that according to legend one of the tunnels I encountered is the Green Man’s Tunnel, which is said to be haunted by the ghost of an electrical worker whose face was disfigured in an accident. 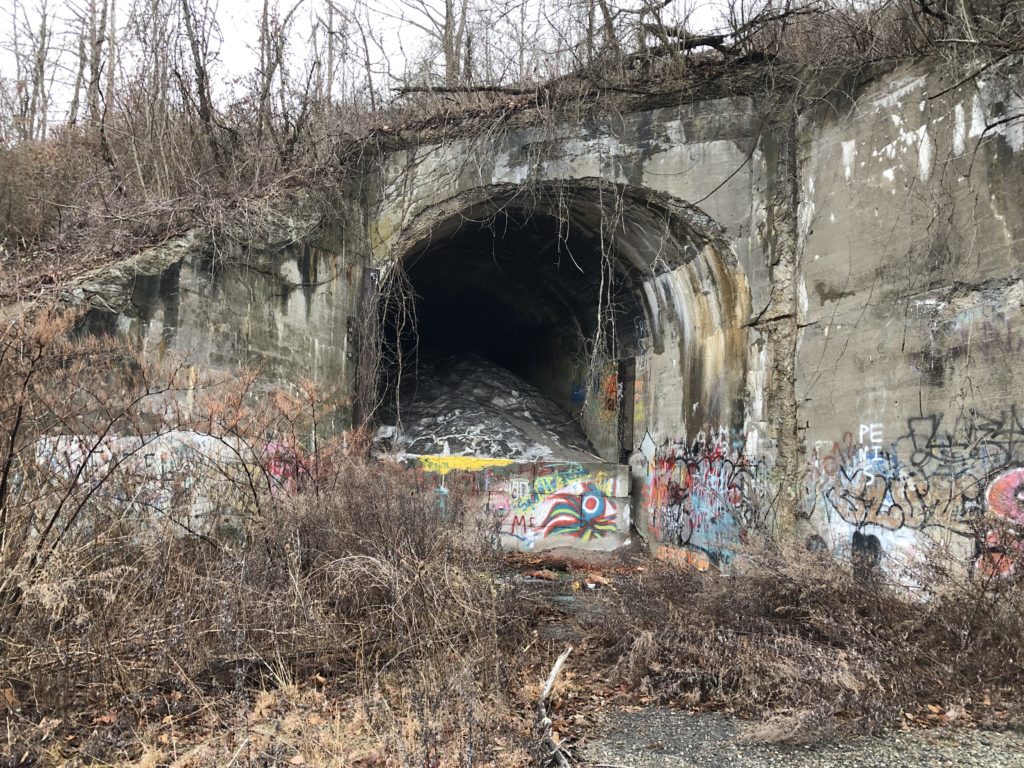 I was, however, intimidated by the tunnel right next to the Green Man’s Tunnel, since it was narrow and curved, and I had to walk through it. Luckily there was the convention that approaching cars honk their horn multiple times when entering, so that I could safely make it to the other side. 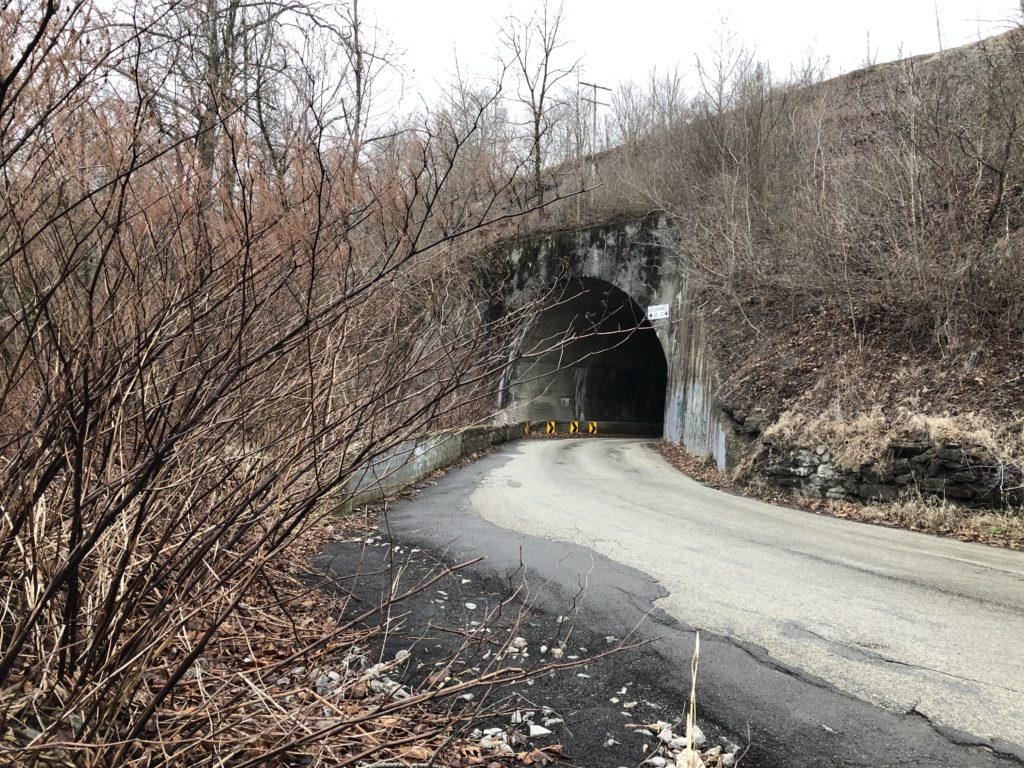 There was one other occasion on which I was scared to be run over by a car. I walked another section of the Montour Trail which ended at the Pittsburgh airport, and towards the end I suddenly faced a major road which had entrances and exists to the motorway. That was unwelcome enough, but moreover there were signs which said “No Pedestrian Access”. 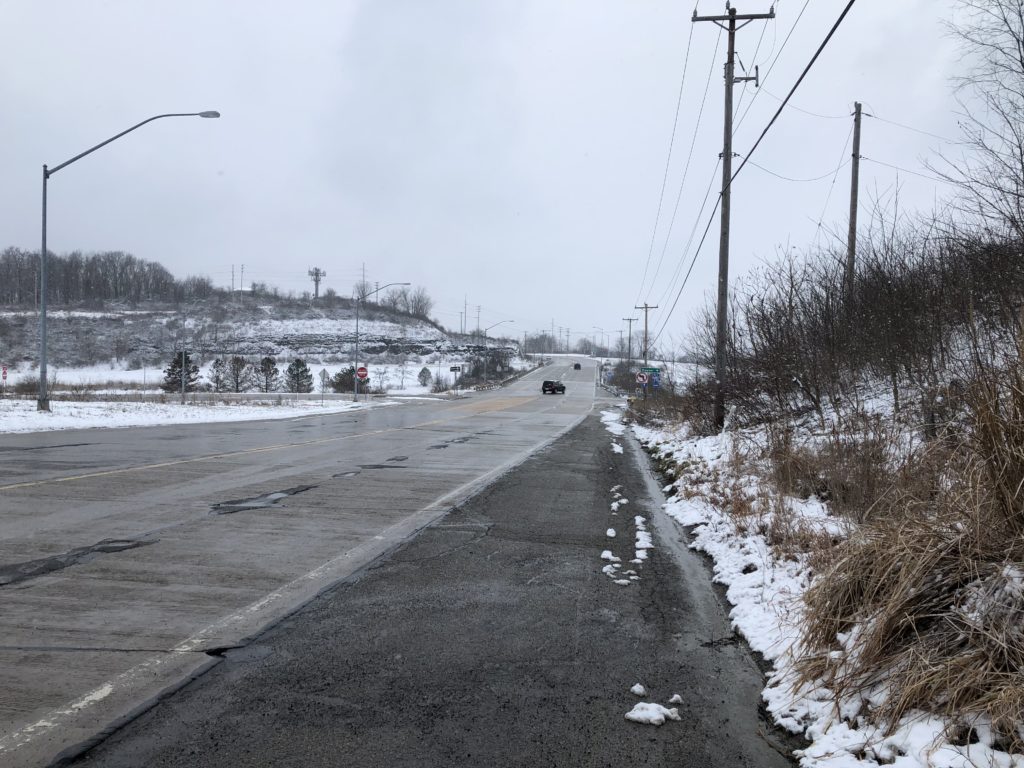 Since there was not alternative route I had to venture on anyway. I was lucky since there was relatively little traffic at the time, and so I made it to the other side without problems. This is not an experience I would like to repeat though.

Overall these walks were very different from the ones I do in England, but interesting and enjoyable in their own way. The pictures so far suggest that the weather was always bleak, but this was not actually the case. Especially from the second half of February on there were many days with sunshine – not a surprise at all, since Punxsutawney Phil had predicated an early spring. As proof I end this relatively long report with a picture of another Pittsburgh park – Frick Park – on a beautiful spring day.