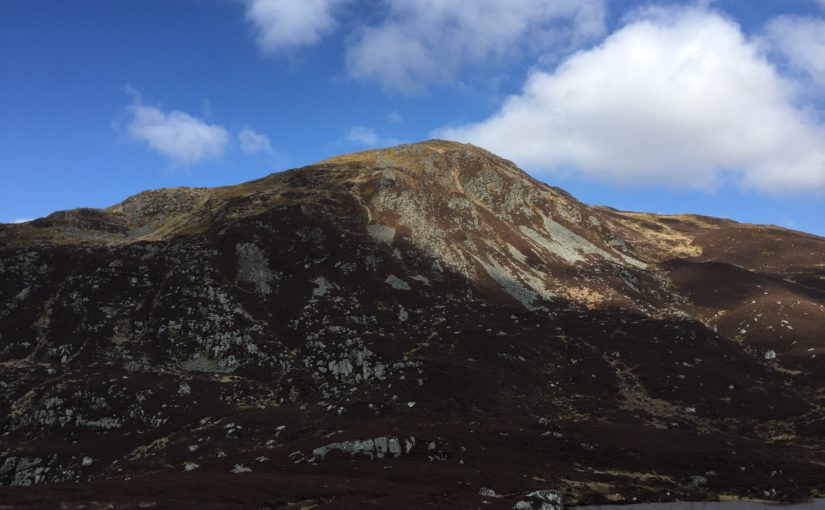 I recently visited my friend X. in Scotland and wanted to use this opportunity to climb up a hill, in order to see how that compares to the flatland walking I usually do. I have lived in Scotland myself for a whole year but did little walking there. The reason for this was that although I had bought hiking shoes before moving specifically to get into walking, these shoes had no ankle support, and unfortunately I discovered after arriving that the local walking club demanded shoes with such support – so I could never join them. In East Anglia this was not necessary though, and so I started going for walks only after moving away from all the hills.

I lacked the local knowledge when planning the trip, but luckily there is a very good database for the Scottish Highlands. X. and I thus decided to climb Ben Vrackie, as this can be done easily using public transport by taking the train to Pitlochry. To get the most out of the day we got up early to catch one of the first trains, but unfortunately this was cancelled – X. luckily checked before leaving the house, and so we could extend our breakfast. Things did not go so smoothly after that either: On the platform at Perth there was large crowd of (partially quite disgruntled) people waiting for the train to Pitlochry (and Inverness), and the dot-matrix indicator displayed the unpromising message “This train is formed of two coaches – Standing room only”.

Naturally this made us concerned about not fitting into the train at all, but miraculously nearly everyone managed to squeeze in. The journey not very comfortable and the train crew were extremely apologetic about the whole situation, but in the end we successfully made it to Pitlochry. The walking could thus begin. 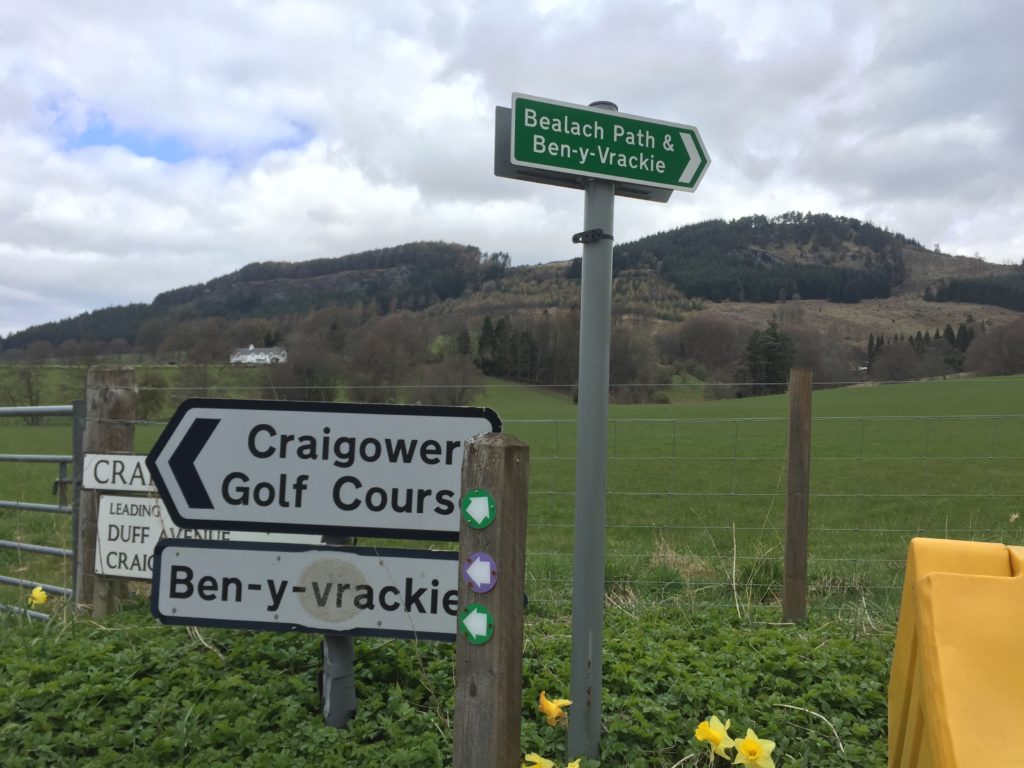 The way to the top of Ben Vrackie can be divided into two stages: The first part leads one from Pitlochry (which is around 150m above sea level) to a lake called Loch a’ Choire at 523m, and – even though I have never experienced anything like it during my travels in East Anglia –  the incline here is relatively gradual. The second part, leading up to the 841m high summit, however, is much steeper and presumably qualifies as hillwalking proper.

The height was not the only thing that made this walk unusual. Scotland’s colour scheme is very different from that of (the south of) England as well, with lots of brown and other dark tones dominating. Furthermore there were many other walkers, roughly two-thirds of which also seemed to be German, whereas on the flatland walks I do one hardly meets anyone apart from a few dog walkers. And finally the wind was pretty strong and cold, so I can now see why many people like hats, scarves, and so on. (I did not get ill though despite lacking all the equipment!) 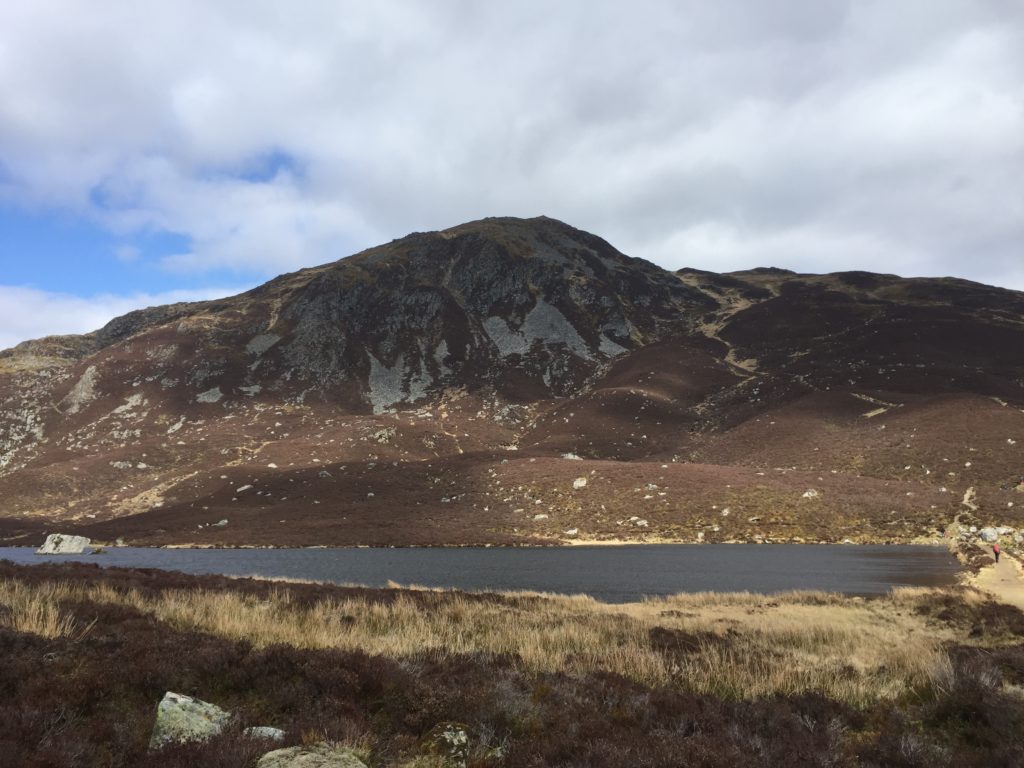 As we reached the lake and prepared ourselves for the final stage of the ascent the wind became considerably stronger, which made the climb to the top quite the adventure. We did eventually reach the summit though, where the views were spectacular (and there was even some snow). 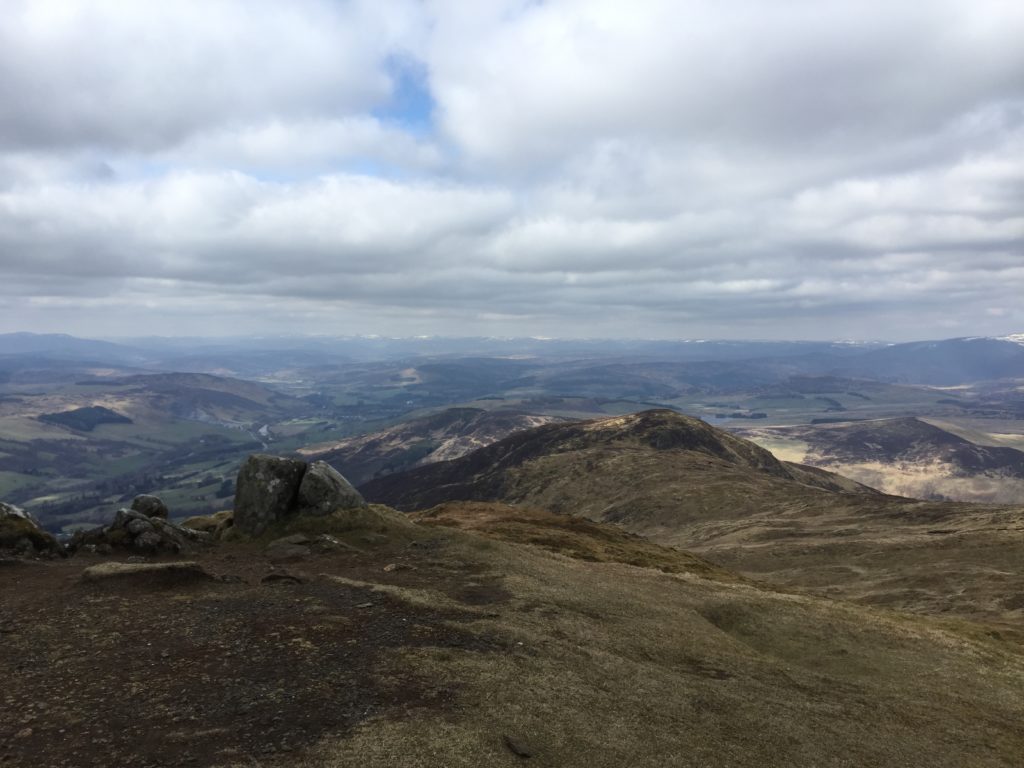 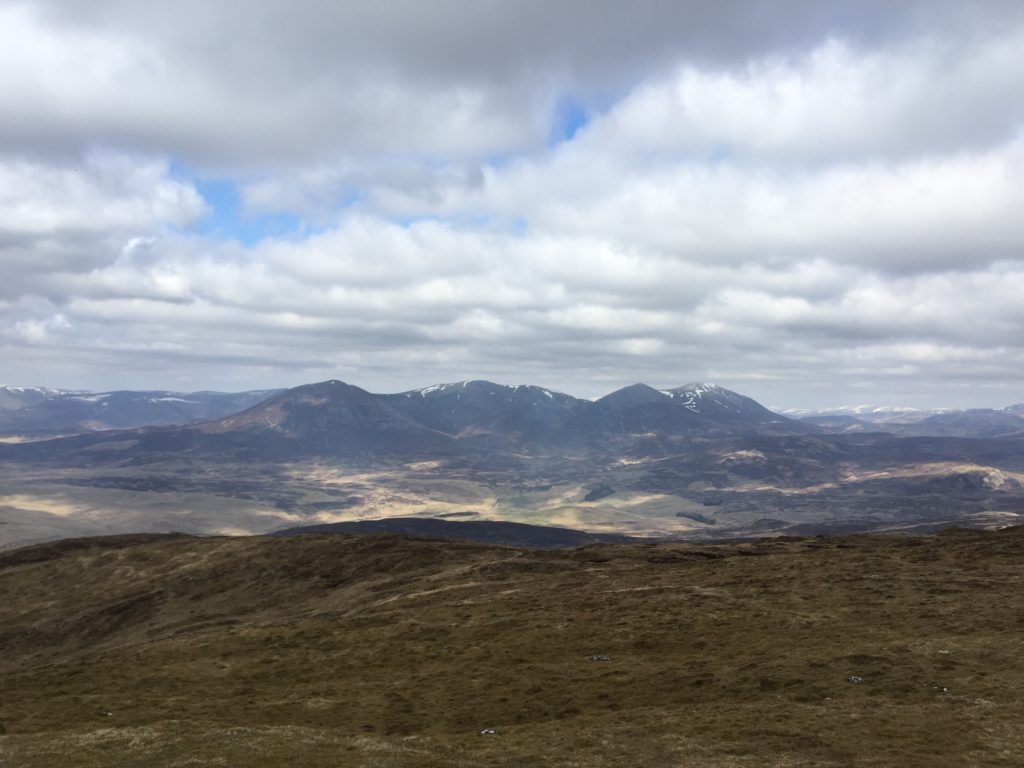 At this height the wind was so strong that it felt like we might be blown away any second, and I had to hold my glasses because I was afraid that the next gust might send them down the mountain. Since this made staying on the summit rather unpleasant we started to climb down again soon after we had taken an appropriate amount of pictures, although at times we had to stop because the wind made it impossible to move in the direction we wanted to go. Overall the way downhill appeared surprisingly long, and I was thus very impressed with ourselves that we had actually managed to make it uphill.

Back at the lake we rested for a bit, and then decided that we had sufficient energy left to extend the walk some more. Instead of going back the way we came we headed west towards a village with the interesting name Killiecrankie, from where we would walk back to Pitlochry along the river Garry. 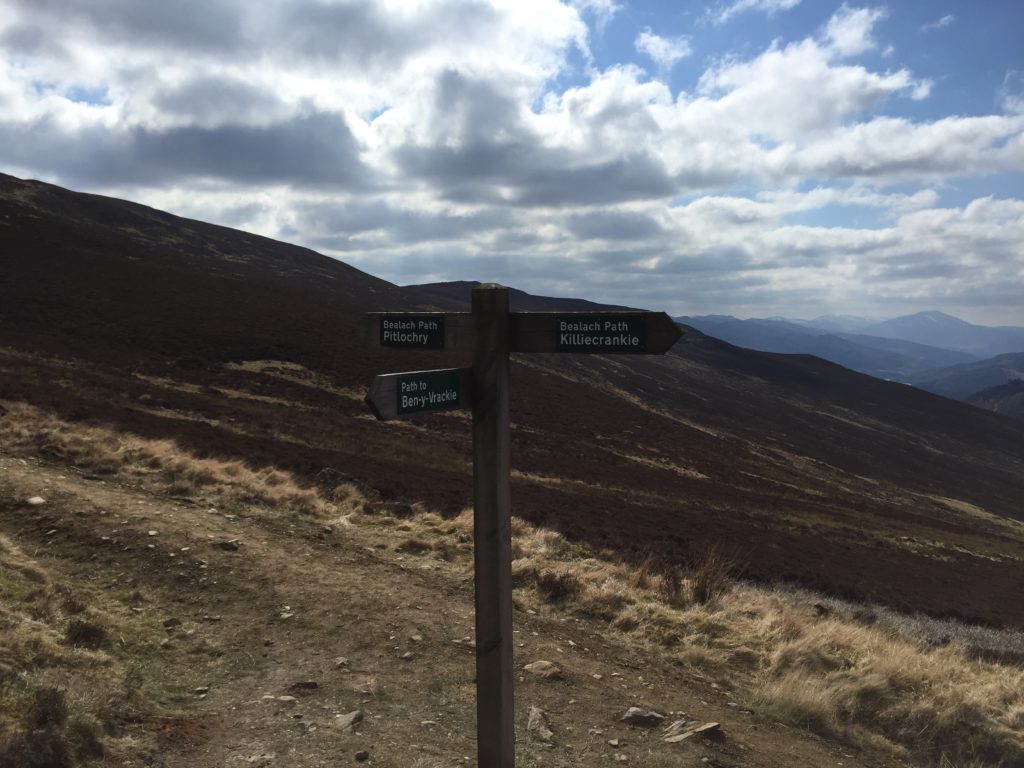 This part of the walk was much more relaxed as the decline was gentle, the wind had subsisted, and the valley we headed into looked pleasant and inviting compared to the mountain we were leaving behind. 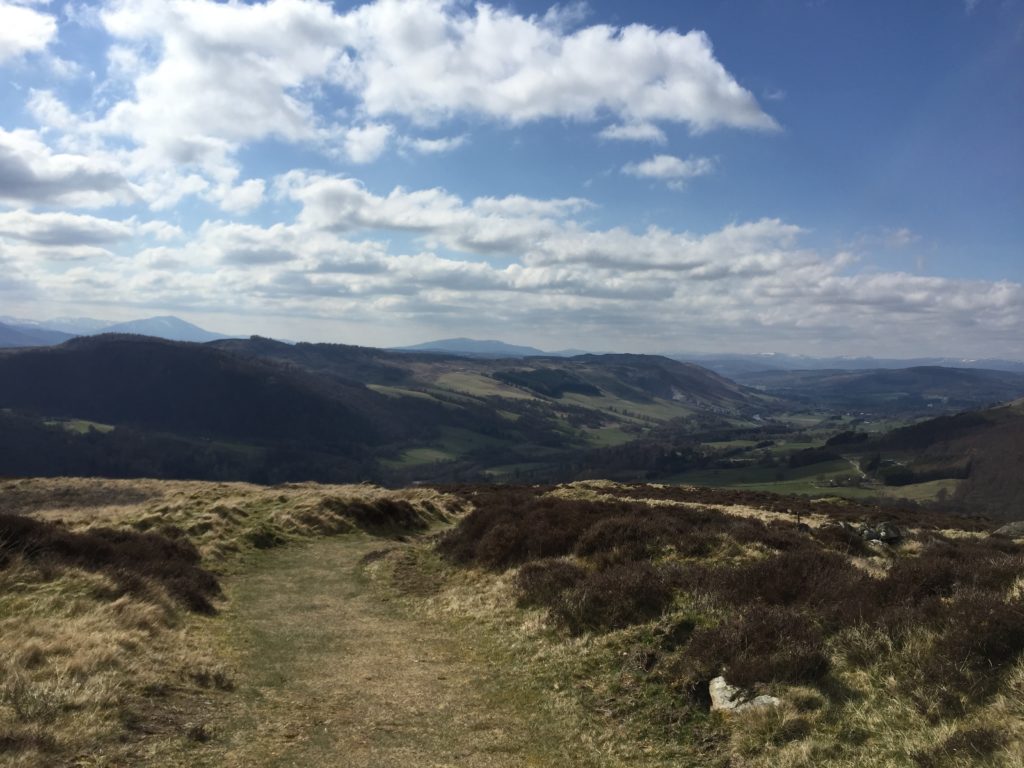 Down by the river we walked south, with the railway viaduct carrying the Highland Main Line between Perth and Inverness beside us. Despite it’s important-sounding name the line is mostly single track, the service is less than hourly, and the travelling speed is relatively slow – which is why the cancellation earlier that day had caused so much chaos. 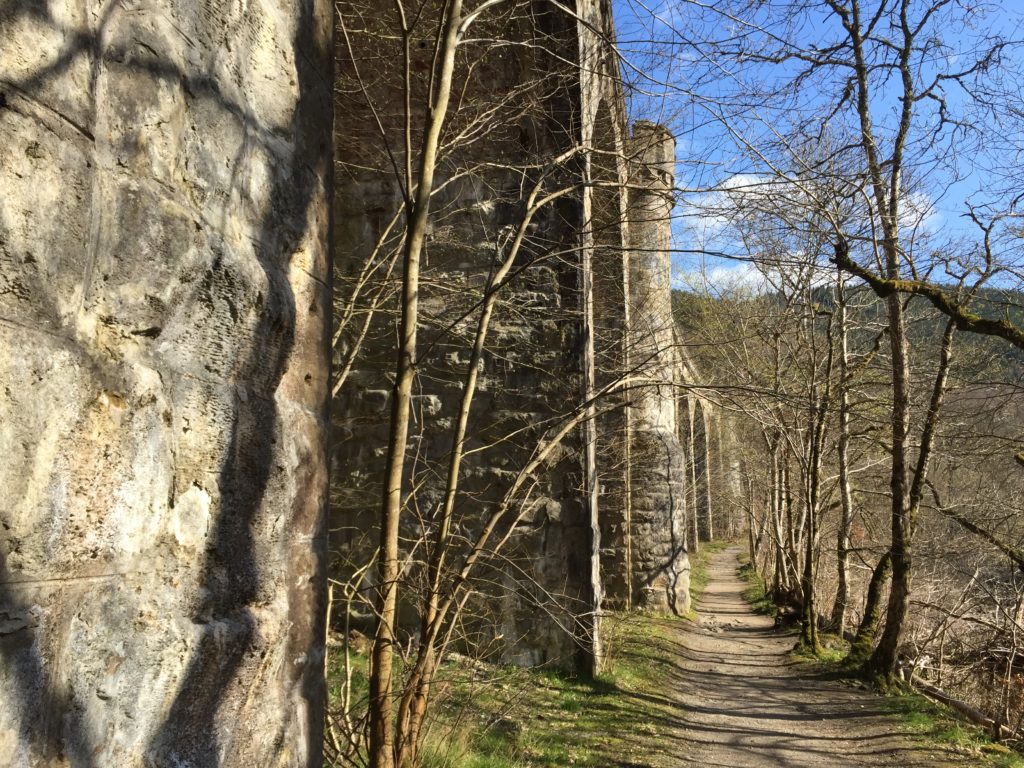 Luckily the journey back was more enjoyable, with all the trains being on time and having free seats. Back at X.’s place we ended the day by eating a very well-deserved fish supper. 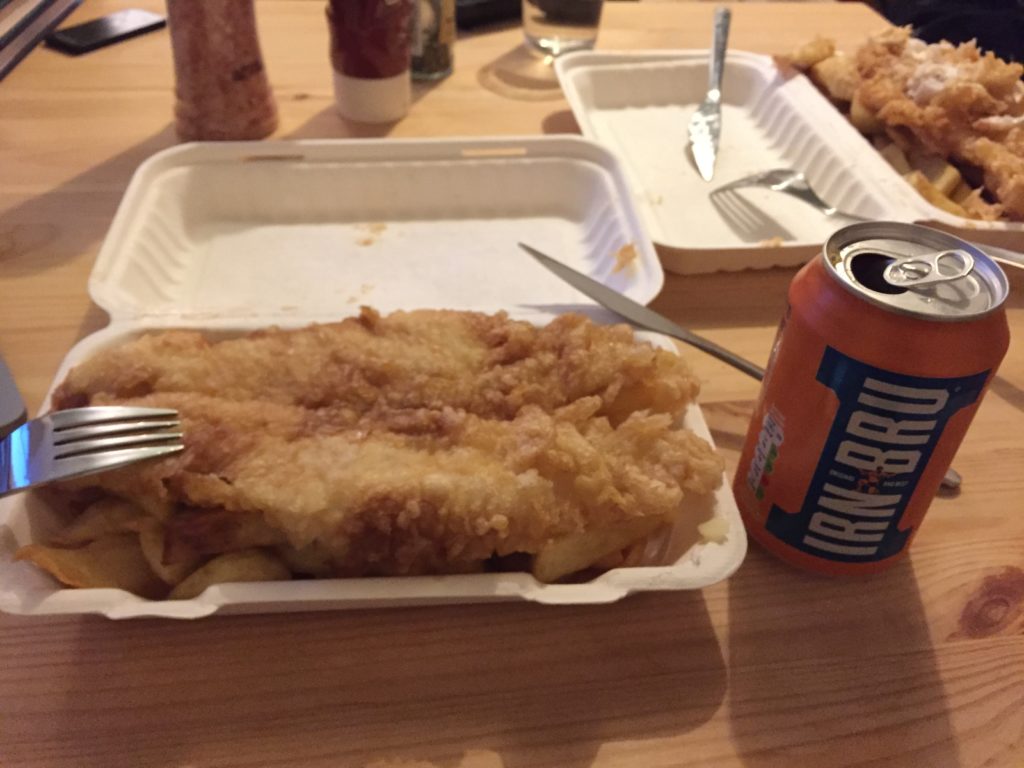 My verdict in hillwalking is that it seems fun in small doses, but I wouldn’t want to climb a mountain like Ben Vrackie every week, for the day after my knees hurt so much that I could hardly walk at all.