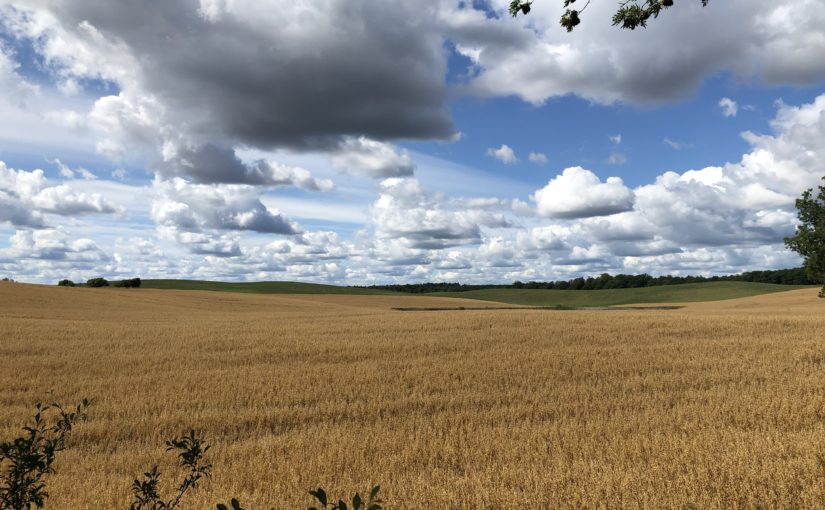 Theodor Fontane is best known as the author of a number of realist novels in the late 19th century, such as Effi Briest. We read this book in school, and while I quite enjoyed it at the time, the general consensus seemed to be that Fontane is a dull writer – an impression our German teacher was not eager to dispel. In 2019 interest in Fontane sparked again since it would have been his 200th birthday, but it seems safe to say that in general he is regarded as a rather pedestrian author, and even those interested in German literature will not necessarily have read any of his works.

In my opinion this reputation is unjustified, and would recommend the short and gossipy Frau Jenny Treibel to anyone who is curious. This is not a blog about literary criticism, however, and the reason for mentioning Fontane at all is a project he worked on before moving to fiction: namely his Wanderungen durch die Mark Brandenburg, a massive five-volume travel book in which he describes countless walks undertaken in Brandenburg, the rural county that surrounds the city of Berlin.

In the past I have lived in Berlin for a number of years, but, unfortunately, never ventured out of the city limits much. As I unexpectedly found myself back for an extended period of time this summer, there was finally the chance to follow Fontane’s footsteps. One thing I had never appreciated until now is that Brandenburg is huge: bigger than Norfolk, Suffolk, Essex, and Cambridgeshire combined, to put it in East Anglian proportions. 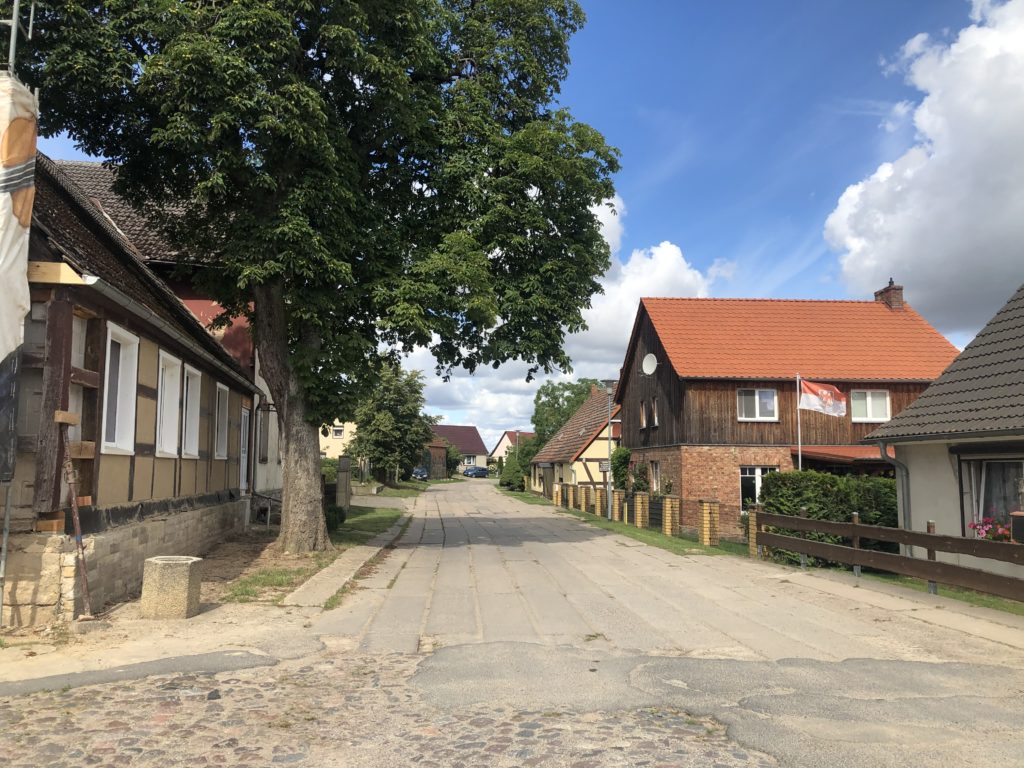 In the preface to the Wanderungen, Fontane warns that those who “always demand a glacier or the roaring see in order to be satisfied should rather stay home”. Indeed, Brandenburg is not a place of extremes: like East Anglia it is relatively flat, with the highest peak just over 200 metres, and unlike its equally flat northern neighbour Mecklenburg-Vorpommern it is landlocked. The relative lack of sights is indeed part of what motivated Fontane to write his travelogues, for he though that there are hidden gems to be found for those with open eyes and minds. Obviously this is the kind of project I can relate to.

One of my favourite journeys led me to a part of the county that Fontane doesn’t actually cover, namely the so-called Uckermark. This is one of the most rural and sparsely-populated areas in the whole of Germany, and also provides the kind of landscape I enjoy most: flat with some gentle rolling hills, and not too many trees to block the view. A more modern development is an abundance of wind turbines. 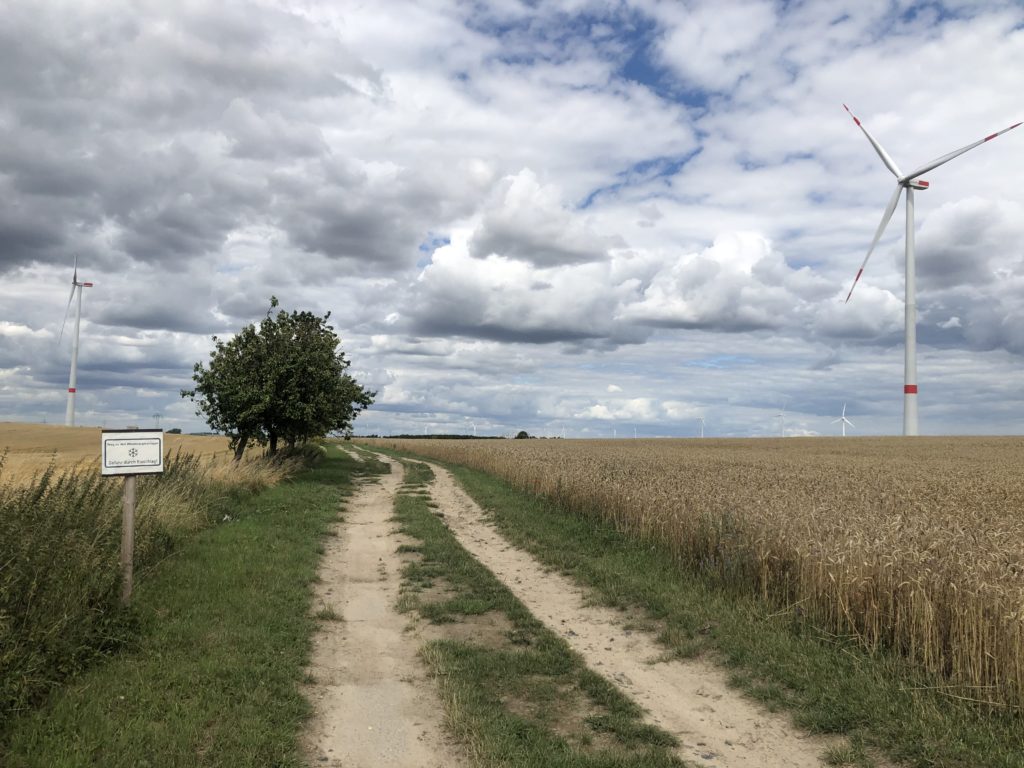 I think the reason Fontane did not write about the Uckermark in any detail is that it is quite far away from the city, and it was much more convenient to visit the areas immediately surrounding Berlin. For it was not the case that Fontane roamed the countryside for weeks with just a tent and a backpack in order to gather material: he mostly went on short day trips using coaches and trains. This makes it somewhat doubtful whether Fontane would actually have enjoyed the many long-distance footpaths that have been named after him in recent decades. 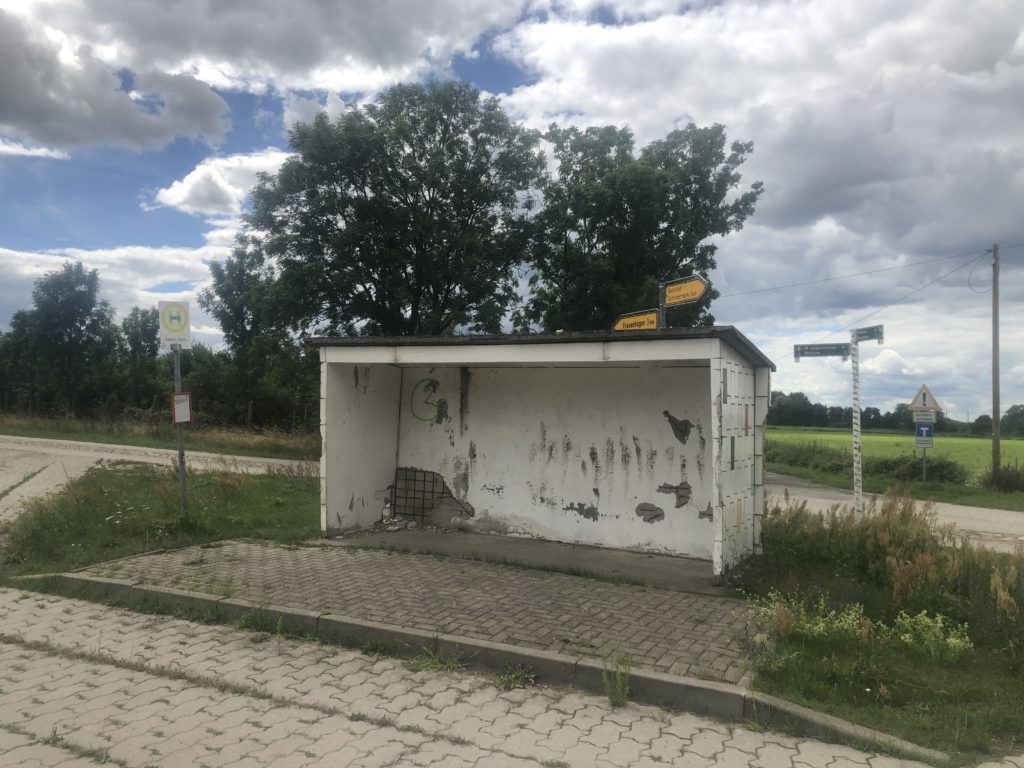 My second major expedition was to Lake Stechlin, the deepest lake in Brandenburg, and also one of the clearest. This brings us back to Fontane’s literary works, for the last novel he completed is inspired by this particular lake. (Fontane describes the plot of this book as follows: Two young people get married, and an old man dies.)

I started my walk in the small town of Rheinsberg, which is home to a castle with an interesting history. Before he became king of Prussia, Frederick the Great – famous for, among other things, popularising the potato – resided here and enjoyed the pleasures of music, theatre and literature. 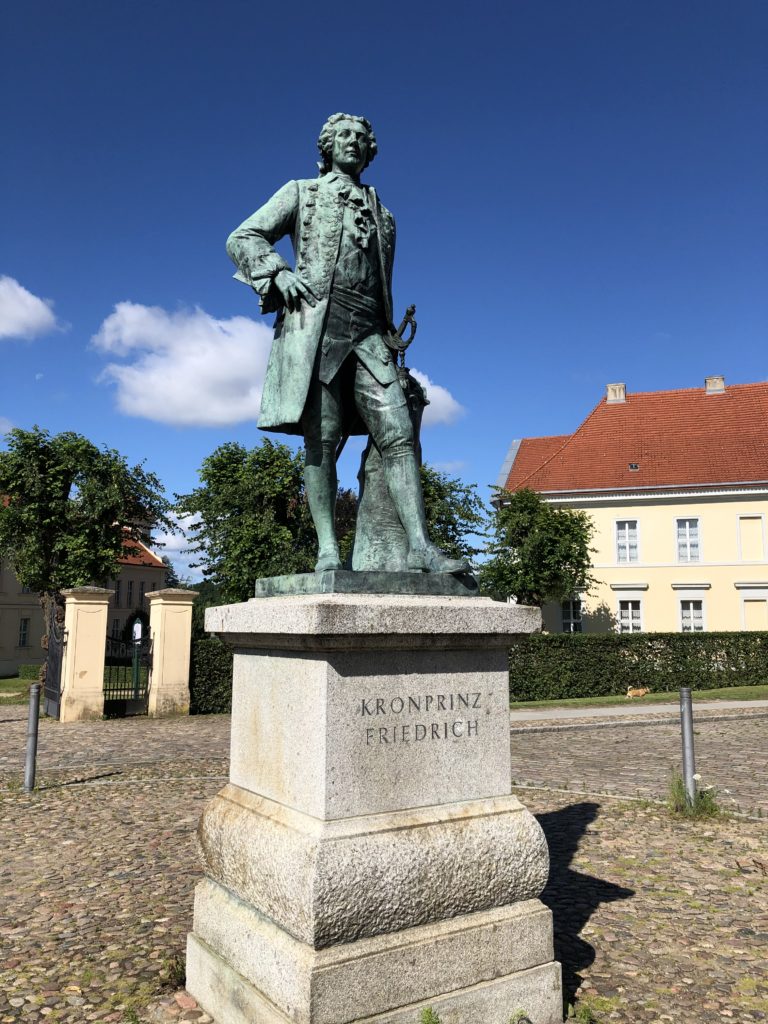 From Rheinsberg I ventured east towards the lake. This part of Brandenburg is all woodland, and so I walked between trees until I reached some deserted railway tracks that lead to a decommissioned nuclear power plant. The plant was built by the East German government in 1966, and closed nearly immediately after the end of the GDR. It will still take some years until all remains of the plant are completely gone, however. On Wednesdays in calendar weeks it is possible to visit to see how the demolition is proceeding. 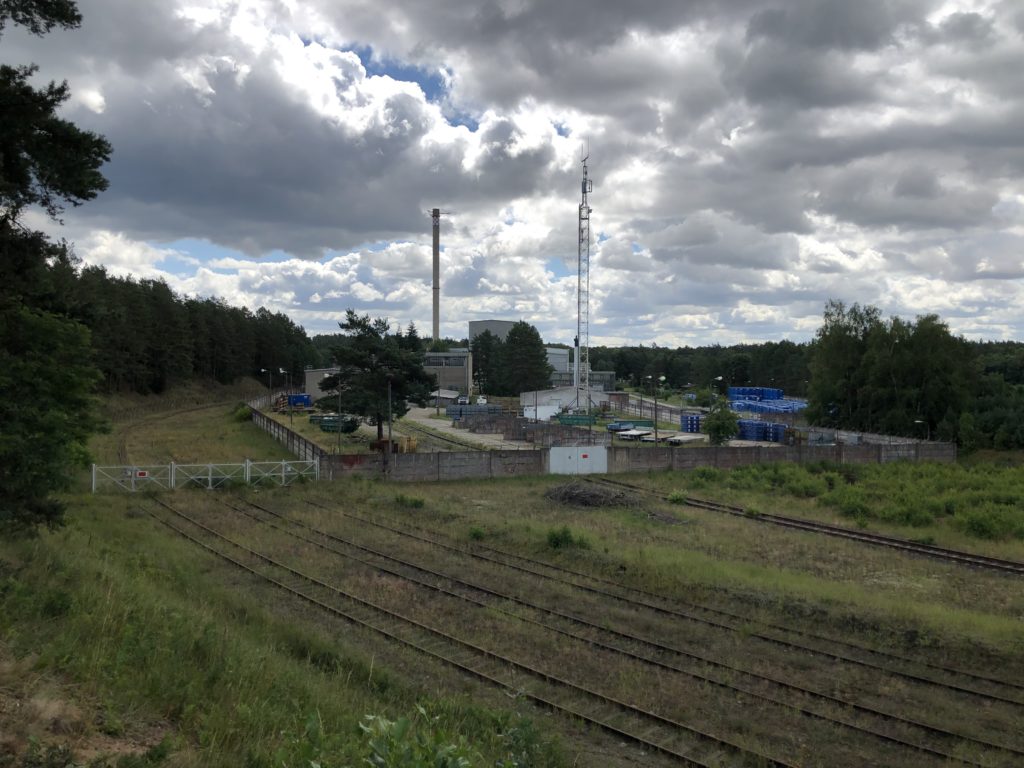 Right after the power plant I finally reached the legendary lake. In Fontane’s novel there is a mysterious connection between the lake and the wider world, so that when major historical events occur Lake Stechlin reacts by producing high waves. I also learned that there is a kind of fish that only lives in this particular lake, which is, no surprises here, named after Fontane. The fish of Lake Stechlin only have two eyes, in case you were wondering. 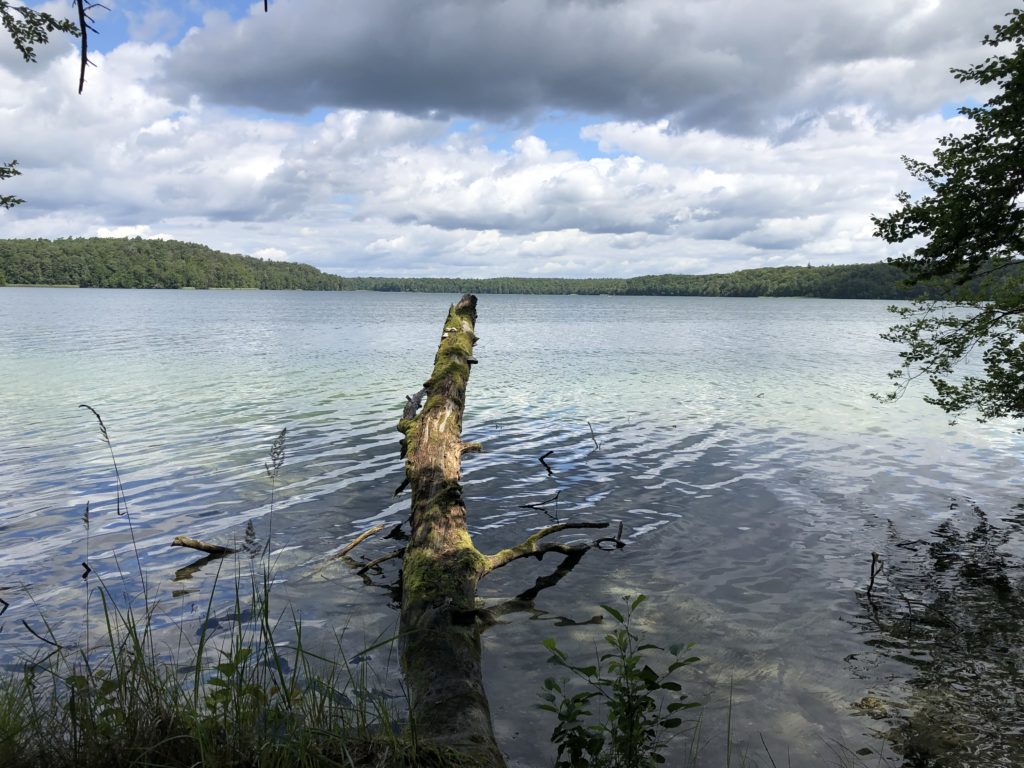 I had now arrived in the village Neuglobsow, on the southern side of the lake, which is a popular holiday destination. This being Germany there were of course Strandkörbe: 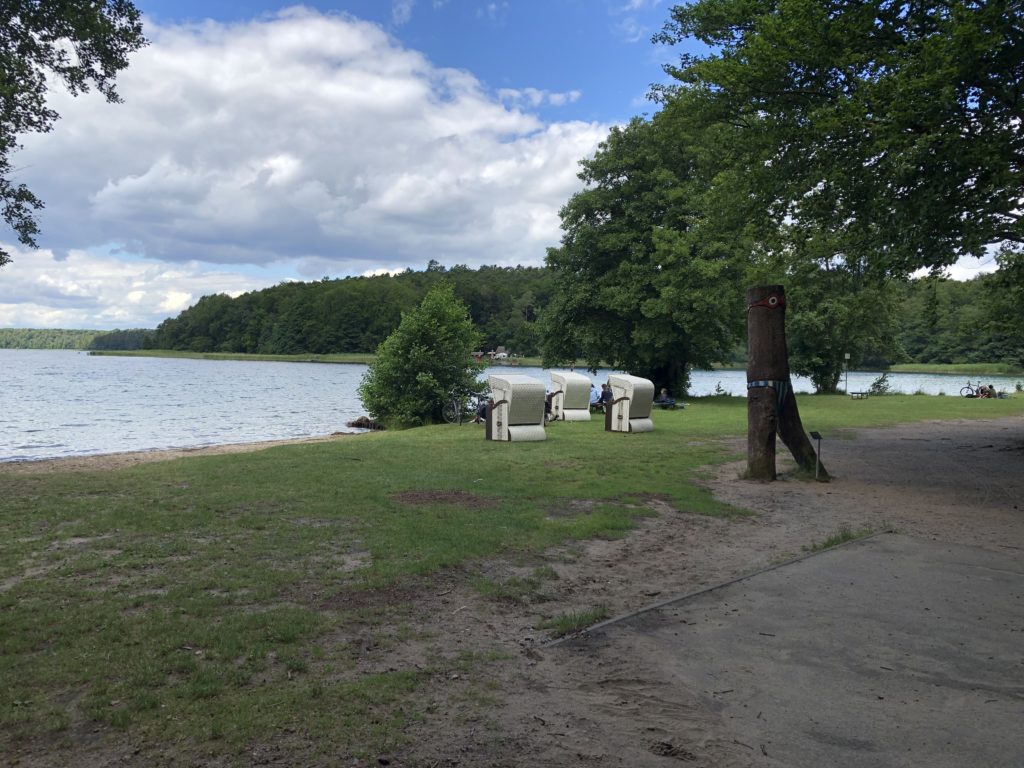 Neuglobsow is roughly halfway between the two railway stations that framed my walk – Rheinsberg and Fürstenberg – and so there was still quite a long way to go. Since it was a hot day, and I had ticked off the main attraction, I planned to proceed quite quickly. When I encountered a sign pointing to a historical graveyard and “Metas Ruh” (Meta’s Peace) I had to stop and investigate, however. Metas Ruh turned out to be a small crypt: 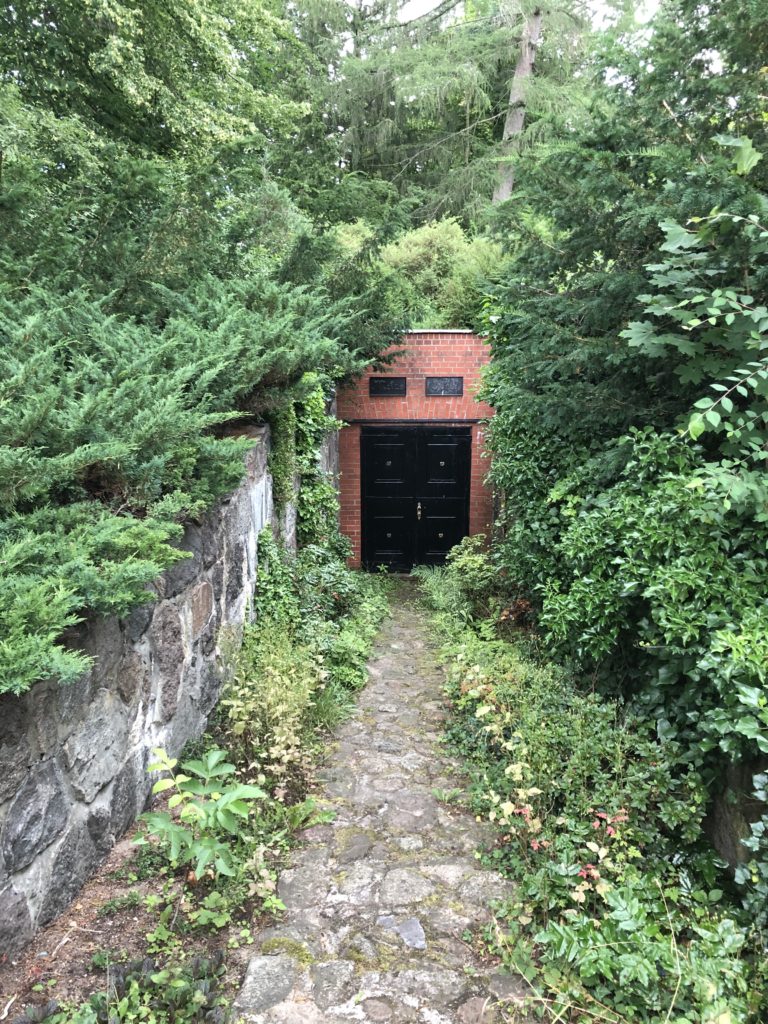 A sign on the wall told the following story: Anna Meta Catharina Noack, said to have “outer beauty, a sharp mind, musical talent and unusual knowledge”, was buried here by her husband Johann Heinrich August Nowak. This seems to have been a tragic affair, for she was only 25, and their 9 month old son is also buried there. Fontane actually has some more of the background story in the Wanderungen, but they are recorded in a regional dialect which is difficult to follow. Johann Heinrich August seems to have remarried, in any case, and I feel that the name Meta should make a comeback.